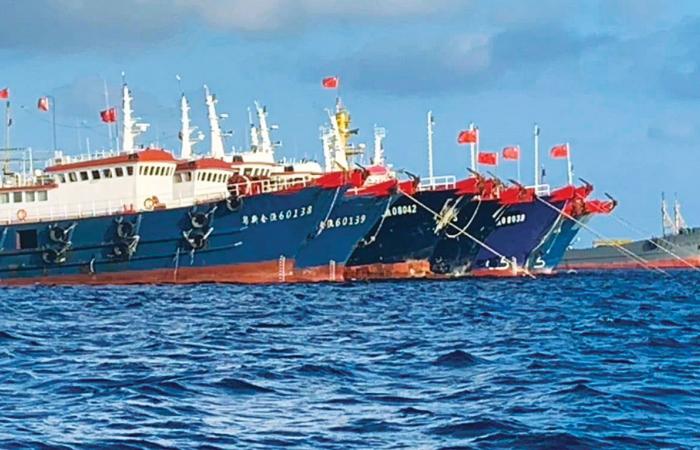 Jeddah - Yasmine El Tohamy - MANILA: The Philippines said on Tuesday it had summoned the Chinese ambassador over the “illegal lingering presence” of Chinese militia vessels in the disputed waters of the Whitsun Reef, which Manila said was “stoking tensions in the region.”

In a statement on Tuesday, the Department of Foreign Affairs (DFA) said it had summoned the Chinese ambassador to the Philippines, Huang Xilian, to reiterate the government’s demands for China to “ensure the immediate departure of all its vessels” from the Whitsun Reef (local name Julian Felipe) and other maritime zones of the Philippines.

“The DFA expressed displeasure over the illegal lingering presence of Chinese vessels in Julian Felipe Reef,” it added.

The latest move comes weeks after the Philippines lodged a diplomatic protest against China over the issue.

During the meeting, DFA Acting Undersecretary Elizabeth Buensuceso told Huang that the reef “lies within the Exclusive Economic Zone (EEZ) of the Republic of the Philippines” and that “the continuing presence of Chinese vessels around the reef is a source of regional tension.”

She also reiterated a 2016 ruling by a UN tribunal dismissing China’s claim to virtually all of the South China Sea, although Beijing has refused to recognize the decision.

Beijing claims the Chinese vessels are fishing boats “escaping rough seas by moving within the lagoon, which Beijing calls Niu’e Jiao and claims as part of its territory.

“Due to maritime situation, some fishing boats have been taking shelter from the wind near Niu’e Jiao, which is quite normal. We hope relevant sides can view this in a rational light,” China’s Foreign Ministry spokesperson Hua Chunying told the media last week.

In a separate message to reporters, the DFA said that “both sides agreed to lower the tensions and handle the issue diplomatically,” but added that “we have yet to see the complete removal of ships.”

Meanwhile, Foreign Affairs Secretary Teodoro Locsin, Jr. tweeted on Tuesday that the National Task Force on West Philippines Sea had told him there were only nine ships at Whitsun Reef. The task force had previously said the Chinese vessels were manned by the Chinese maritime militia.

“While it may well be traditional fishing grounds, tradition yields to law and the law on the matter is UNCLOS (UN Convention for the Law of the Sea) and the Arbitral Award and the common rules of statutory construction,” he said in another tweet, before telling China it was “time to go.”

Monday’s meeting is the second time the DFA had summoned a Chinese envoy, with a similar issue raised in 2019 when a Filipino fishing boat was sunk by a Chinese vessel, leaving the fishermen stranded at sea.

Amid the escalating feud between the two countries, a Filipino MP expressed resentment against China’s “bullying and increasingly aggressive territorial expansion in the region” before demanding that the “Chinese completely vacate” the reef.

“Why are they still there? China is becoming the region’s biggest bully,” Sen. Risa Hontiveros told a media forum hosted by the

Philippine Correspondents Association of the Philippines.

“She (China) exploited a global health crisis by executing a series of coordinated incursions into the WPS and insisting her presence even after several diplomatic actions from our end,” Hontiveros said.

The senator added that the latest intrusion “shows China will do what she wants for her own selfish interest, even if it means

threatening peace and stability in the region; even if it means attacking already vulnerable countries, including the Philippines.”

The senator explained that the Philippines’ Department of National Defense (DND) had ordered all Chinese vessels to evacuate Philippine territory after over 200 ships gathered at the Julian Felipe Reef in March.

The DFA vowed to lodge a diplomatic protest every day until China’s vessels vacated the Philippines waters.

“At first, the Chinese Embassy claimed the vessels were just parking due to inclement weather. But Philippine authorities said there was no storm. Then it went as far as insisting that Julian Felipe Reef is Chinese territory. When will the lies, deception, and hypocrisy stop?” Hontiveros asked.

“Our coast guard should also immediately inspect what the Chinese vessels are doing there to see if our environmental and fisheries laws are being observed,” the senator added.

Hontiveros expressed outrage and anger at what she said was a “deliberate, reckless, and unlawful campaign of the Chinese government to use its military and economic might to deprive the Filipino people of the full use of the waters comprising the country’s EEZ and continental shelf.”

“This is a direct challenge to the international rules-based order that has maintained stability in the region for so long,” she

stressed, urging the DND to deploy more naval assets, including the coast guard, to “provide a protective umbrella for

fisherfolk who want to venture out to sea.”

Hontiveros said that the government must assure fishermen that the nation’s defense forces would be able to “safeguard their means of subsistence.”

“We cannot allow ourselves to be kicked out of our own backyard. The West Philippine Sea is part of the patrimony of the Filipino

people — our national dignity is at stake,” she said, urging the government to rethink its “allegiances.”

“We must be consistent and firm in standing up for our national interests. We should hold China accountable for the damage she has

done to fragile marine ecosystems within our EEZ,” she said.

She added that the government must ensure that Philippines environmental laws, not China’s, are being implemented and enforced in the West Philippine Sea.

Hontiveros also expressed her indignation against China’s “deliberate, reckless, and unlawful campaign of the Chinese government to use its military and economic might to deprive the Filipino people of the full use of the waters comprising the country’s EEZ and continental shelf.”

“The Chinese like to tell others to refrain from irresponsible behavior, but their recent behavior has been far from honest or responsible,” she said.

She said that to convince Filipinos of its good intentions, China has given the country its vaccines — “possibly for free, or perhaps, as many people fear, in exchange for our waters.”

Hontiveros added: “We must not allow China to shake our hands on vaccines and procurement, but stab us in the back on the West Philippine Sea. But Malacanang has tolerated China’s duplicitous strategy.

“This isn’t how a friend treats you. This isn’t even the act of a good neighbor. China is the bully pretending to be your best friend.

It’s time to say enough is enough. Our government must rethink its current alliances — and perhaps its allegiances. We must be

consistent and firm in standing up for our national interests,” she said.

These were the details of the news Manila summons Chinese envoy over reef dispute for this day. We hope that we have succeeded by giving you the full details and information. To follow all our news, you can subscribe to the alerts system or to one of our different systems to provide you with all that is new.