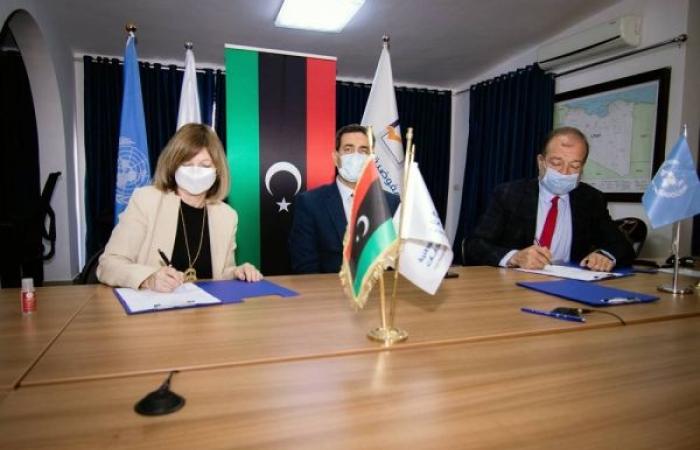 The project works to support the High National Elections Commission (HNEC) to prepare and hold national elections. Amongst capacity development assistance, UNDP works together with HNEC on strengthening the voter registration system.

Among the project’s initiatives are the procuring of 12,000 ballot boxes and the issuing of voter cards to use as one of the prerequisites in voter identification at the polling stations to ensure a transparent process.

“We applaud the commitment of President Emad Sayeh of the High National Elections Commission and his whole team. We call on all actors to assist them in their mission and we thank once again UNDP for their commitment to work with and for the people of Libya.”

The ceremony was held in the presence of Dr. Emad Al-Sayah, HNEC chairperson, who affirmed: “Within the framework of the international support for a peaceful change in Libya, and aiming at achieving security and stability in the country, this contribution will be helpful to raise HNEC capacity to implement elections on Dec. 24, 2021.”

On his part, UNDP’s Noto, said: “Elections are a fundamental pillar for democratic governance. In Libya, UNDP and UNSMIL are working together supporting HNEC to conduct a transparent and inclusive electoral process in which all Libyans would be able to elect their government and the future of their country on Dec. 24, 2021.

“The support that France is providing definitely help to strengthen and build democratic national institutions and advance the country to inclusive sustainable development.”

Since the announcement of the decision of holding national elections on Dec. 24, 2021 by the Libyan Political Dialogue Forum members in November 2020, UNDP has been able to raise Euro 2.8 million to enhance the readiness of the Commission for elections. — SG

These were the details of the news France tops up with Euro 1million its contribution to support Libya national elections for this day. We hope that we have succeeded by giving you the full details and information. To follow all our news, you can subscribe to the alerts system or to one of our different systems to provide you with all that is new.