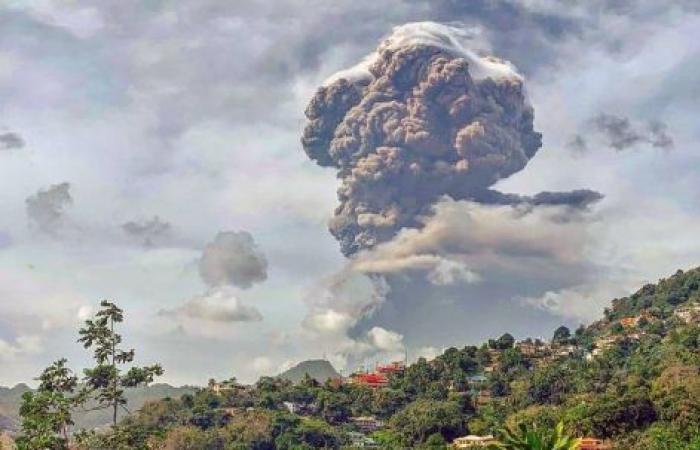 Hind Al Soulia - Riyadh - NEW YORK — Last week’s eruption of La Soufrière volcano in Saint Vincent and the Grenadines, has left the entire population of the main island without clean water and electricity, the UN spokesperson said on Monday.

Citing reports from the UN Office for the Coordination of Humanitarian Affairs (OCHA), Stéphane Dujarric added that about 20,000 evacuees on the Caribbean island are currently in need of shelter.

“The eruption has affected most livelihoods in the northern part of the island, including banana farming, with ash and lava flows hampering the movement of people and goods,” he told journalists at the daily news briefing.

Although the volcano had been dormant since 1979, it started spewing smoke and actively rumbling in December.

La Soufrière erupted last Friday, blanketing Saint Vincent in a layer of ash and forcing some 16,000 residents to evacuate their homes to cruise ships and safer parts of the island.

Emphasizing that access to the island is limited, Dujarric said that along with the Caribbean Disaster Emergency Management Agency, the UN has mobilized pre-positioned water and sanitation hygiene supplies, currently stored in nearby Barbados.

Over the weekend, the secretary-general spoke to Prime Minister Ralph Gonsalves and the government officially asked for UN assistance.

The aid includes relief items, food and cash distribution and technical advice while neighboring countries are contributing emergency supplies and assets to support evacuation, according to the UN spokesperson.

Meanwhile, OCHA reported that as of Monday, intervals between tremors have lasted between 1.5 to 3 hours, which, based on visual observations and satellite imagery, are associated with periods of explosive activity or enhanced venting of the volcano.

“Explosions and accompanying ashfall of similar or larger magnitude are likely to continue to occur over the next few days,”,according to the UN humanitarian office.

At the request of the prime minister, the UN has also mobilized experts through the UN Environmental Program (UNEP) to develop and implement a debris management plan, including to clean up ash and promote environmental health and safety.

• Airports in Saint Vincent and the Grenadines are closed.

• Approximately 30 villages have been evacuated.

These were the details of the news Volcanic eruption leaves ‘entire population’ of Saint Vincent without clean water for this day. We hope that we have succeeded by giving you the full details and information. To follow all our news, you can subscribe to the alerts system or to one of our different systems to provide you with all that is new.