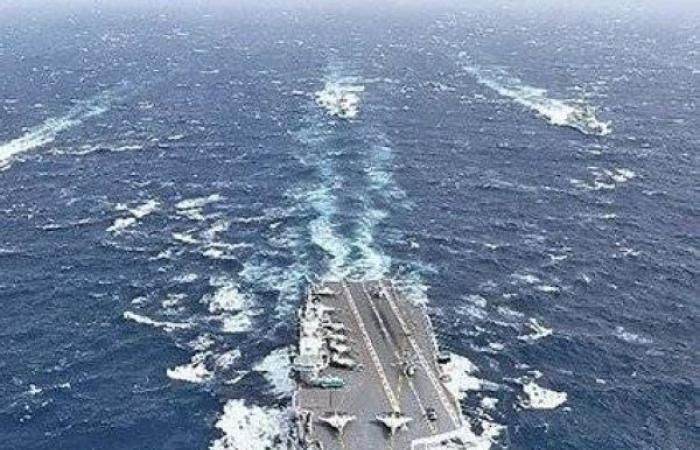 Hind Al Soulia - Riyadh - HONG KONG — Military activity in the South China Sea spiked over the weekend as a Chinese aircraft carrier entered the region and a US Navy expeditionary strike group wrapped up exercises.

Meanwhile, the US and Philippines were preparing for joint drills as the US secretary of defense proposed ways to deepen military cooperation between Washington and Manila after China massed vessels in disputed waters.

China's state-run Global Times on Sunday said the country's first aircraft carrier, the Liaoning, steamed into the South China Sea on Saturday after completing a week of naval exercises around Taiwan. There was no official announcement of Liaoning's position, but the Chinese tabloid cited satellite images first reported by the US media outlet The War Zone.

The ships also carried hundreds of Marine ground forces from the 15th Marine Expeditionary Unit as well as their supporting helicopters and F-35 fighter jets.

"This expeditionary strike forcefully demonstrates that we maintain a combat-credible force, capable of responding to any contingency, deter aggression, and provide regional security and stability in support of a free and open Indo-Pacific," US Navy Capt. Stewart Bateshansky, commodore, Amphibious Squadron 3, said in a statement.

Global Times quoted a Chinese military expert, Wei Dongxu, as saying the US Navy exercises were a provocation.

But a US analyst described Liaoning's presence in the South China Sea as normal for the spring when weather conditions are conducive to training. "The Liaoning goes down there this time of year (to practice) air defense and live-fire training," said Carl Schuster, a former director of operations at the US Pacific Command's Joint Intelligence Center. — Courtesy CNN

These were the details of the news US and China deploy aircraft carriers in South China Sea as tensions simmer for this day. We hope that we have succeeded by giving you the full details and information. To follow all our news, you can subscribe to the alerts system or to one of our different systems to provide you with all that is new.