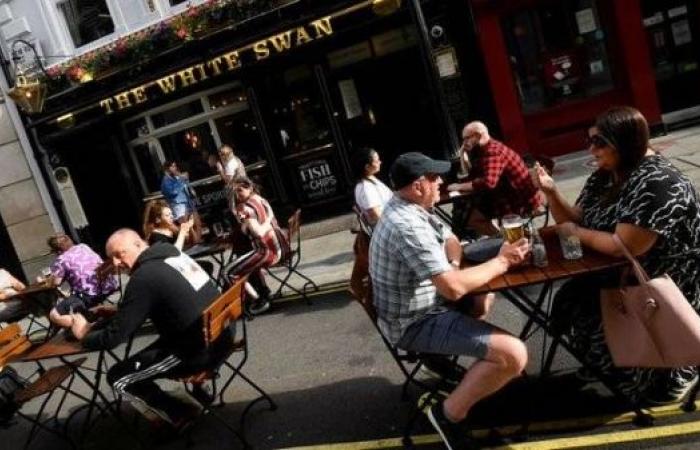 Hind Al Soulia - Riyadh - LONDON — Millions of people in England are poised for their first chance in months for haircuts, casual shopping and restaurant meals on Monday, as the government takes the next step on its lockdown-lifting road map.

Scotland, Wales, and Northern Ireland are following their own, broadly similar, plans.

Nationwide restrictions have been in place in England since early January, with similar rules in the other parts of the UK, to suppress a surge in coronavirus infections that swept the country late last year, linked to a more transmissible new variant first identified in southeast England.

Britain has had Europe’s worst coronavirus outbreak, with more than 127,000 confirmed deaths.

But infections, hospitalizations and deaths have all fallen thanks to the lockdown, and a mass vaccination program that has seen at least one dose given to more than 60% of the adult population.

Meanwhile, swaths of mainland Europe are seeing cases rocket, with some countries considering new measures, while others have already tightened restrictions.

While Germany's Robert Koch Institute (RKI) on Saturday announced that 15.2% of the country's population — 12.7 million people — have had at least one dose of a vaccines, it said the situation is still "very, very serious".

German Chancellor Angela Merkel doubled down on her support for a short, nationwide "bridge lockdown" to fill the gap until more people get a vaccine.

France has just completed the first week of its nationwide lockdown, with all schools and nonessential shops closed until the end of April.

French Health Minister Oliver Veran on Sunday announced a new vaccine strategy that will see the waiting time between the two doses of the BioNTech-Pfizer and Moderna jabs extended from four to six weeks.

The move aimed to help bolster the country's vaccine rollout, which, after experiencing problems with supplies and bureaucracy, has finally begun to ramp up following a slow start.

Marchers took to the streets Saturday in the Romanian capital of Bucharest to protest restrictive measures to fight the spread of the virus even as new daily infections and deaths rose in the nation.

The protest was held on the same day that the country passed the milestone of having 1 million confirmed COVID cases.

Hospital intensive care units are struggling to cope with the record demand of just under 1,500 COVID-19 patients and 12,000 others are in other wards.

Not everywhere on the continent was reintroducing measures: two further countries that are set to loosen restrictions on Monday are Slovenia and Serbia.

The former will scrap a curfew between 10 pm and 5 am, pre-schools and primary schools are set to reopen, along with galleries, museums and hairdressers.

Shopping centers will welcome customers on Monday in Serbia, but restaurants must continue to serve customers outside. — Euronews

These were the details of the news UK eases COVID restrictions while much of mainland Europe grapples with surge for this day. We hope that we have succeeded by giving you the full details and information. To follow all our news, you can subscribe to the alerts system or to one of our different systems to provide you with all that is new.