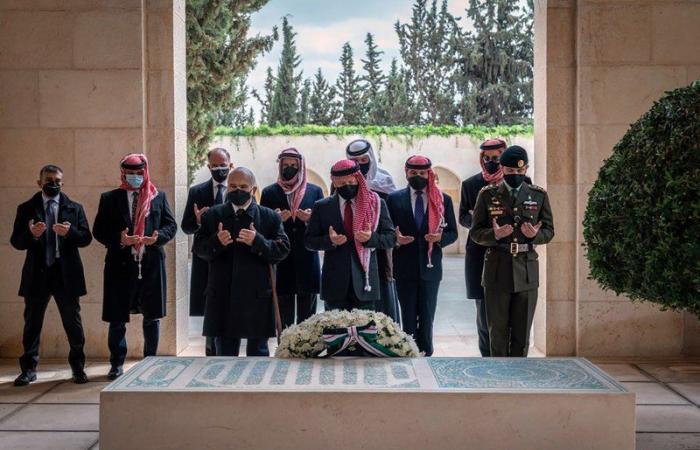 Mohamed Nass - Cairo - AMMAN, Jordan (AP) — Jordan’s Prince Hamzah on Sunday made his first public appearance since he was placed under house arrest last week, reciting Quranic verses together with King Abdullah II at the graves of their forefathers. The gesture appeared to be an attempted show of unity on a major Jordanian holiday.

Abdullah has attempted to signal in recent days that the situation is under control. But Sunday’s staged event left it unclear whether the king and his popular half brother have truly put aside their differences. The conflict had escalated into the most serious public rift in the ruling family in decades, although Hamzah has denied any wrongdoing.

Hamzah joined members of the Jordanian royal family marking the centenary of the establishment of the Emirate of Transjordan, a British protectorate that preceded the kingdom. The royal palace released a photo and video with Abdullah and Hamzah joining other dignitaries at the grave of their father, the late King Hussein, and the late King Talal, their grandfather.

A photo and video showing the family together reciting the opening chapter of the Quran appeared to be aimed at sending a message of unity at a sensitive time for the kingdom. The chapter, known as the Fatiha, is traditionally recited at people’s gravesides.

It was the first time that Hamzah was seen in public since he was placed under a form of house arrest on April 3 following accusations that he was involved in a “malicious plot” to destabilize the kingdom.

In statements leaked to the media, Hamzah denied the accusations and accused the country’s government of corruption and incompetence. Hamzah has said his actions are out of love for the country. But his past criticism of government policies, and more recently, his outreach to powerful tribal leaders critical of the government, have been seen as threats to the king.

Abdullah subsequently said authorities had thwarted an attempt at sedition involving his half brother and some 18 suspects, while saying he was angry and in shock. Abdullah also suggested there was continued control over Hamzah’s movements, saying the prince was “with his family at his palace, under my care.”

Authorities have imposed a sweeping gag order on any coverage of the royal dispute in a sign of how sensitive they are to how it is perceived. The gag order and the king’s willingness to sanction his own brother also reaffirmed what Jordanians understand as their “red line” — an absolute ban on criticizing the monarch or the royal family.

Sunday’s appearance by Hamzah indicated that he was safe, but it remained unclear whether he had come voluntarily or been released from the restrictions on his movement. Hamzah, wearing a suit, traditional headdress and blue surgical mask, joined his relatives in prayers but did not comment in public. His whereabouts after the ceremony were not immediately known.

There also has been no sign that authorities have released up to 18 other detainees, including members of one of the powerful tribes on which the monarchy has historically relied.

Even before the palace drama, Jordan was grappling with an economic crisis exacerbated by the coronavirus pandemic, with one in four people out of work. Longstanding complaints about corruption and misrule have fueled scattered protests in recent months.

The United States, along with regional allies, have all rallied behind the king. Jordan has long been seen as a relatively stable western ally in the Middle East in a turbulent region. But the past year of the coronavirus has rocked the country’s largely tourism-dependent economy.

Abdullah and Hamzah are both sons of King Hussein, who ruled Jordan for nearly a half-century before his death in 1999 and remains a widely beloved figure. Abdullah had appointed Hamzah as crown prince upon his succession but stripped him of the title in 2004 and gave his eldest son the title instead.

Jordan has a large Palestinian population, including more than two million refugees from past wars with Israel and their descendants. The monarchy has granted most of them full citizenship but has historically viewed them with suspicion. Its main base of support is powerful tribes from east of the Jordan River, who dominate the security forces.

For decades, the monarchy has cultivated close ties with the U.S. and other Western nations, which it has used to press for the creation of a Palestinian state including the West Bank and east Jerusalem, which Israel captured from Jordan in the 1967 war.

That strategy has hit a wall in recent years as the peace process has ground to a halt. Israel and Jordan made peace in 1994 and maintain close security ties, but relations have soured amid a series of recent diplomatic spats.

At the same time, Gulf countries have been cultivating closer ties with Israel over their shared antipathy toward Iran, relations made public last year when the United Arab Emirates agreed to normalize relations with Israel in a U.S.-brokered deal. Saudi Arabia has at times appeared to be weighing a similar move.

By JOSEF FEDERMAN and OMAR AKOUR

These were the details of the news Jordanian prince makes first public appearance since arrest for this day. We hope that we have succeeded by giving you the full details and information. To follow all our news, you can subscribe to the alerts system or to one of our different systems to provide you with all that is new.