Arrests across Europe as people flout or protest COVID-19 restrictions 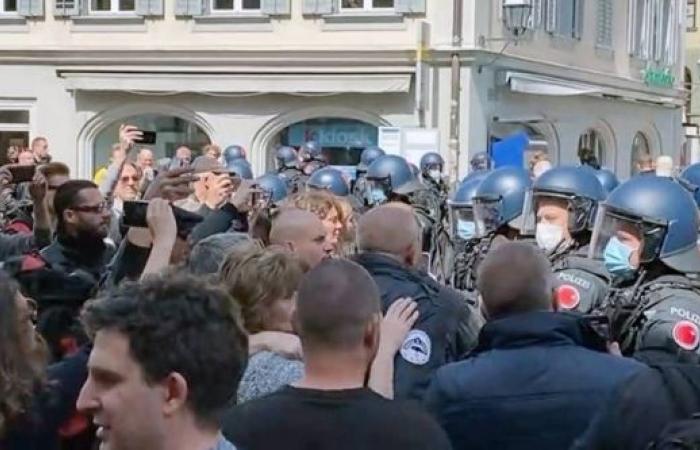 Hind Al Soulia - Riyadh - PARIS — Police in Paris have arrested nine people and fined about 160 more since the beginning of the weekend for clandestinely meeting in closed restaurants despite COVID-19 restrictions.

Protests against COVID-19 restrictions were meanwhile held in multiple European capitals on Saturday.

Police in the French capital said on Sunday morning that they had arrested seven people during the night in two separate operations at a shisha bar and a restaurant for refusing to comply with an order to disperse and attacking officers. Fifty-eight people were also issued fines.

The previous evening, they had already arrested the owner and the manager of a restaurant where 110 people had gathered clandestinely. All were also issued fines.

It comes days after the government's own behavior was questioned following the release of a documentary that accused ministers of dining in secret restaurants in violation of COVID rules.

France is currently under lockdown with all but non-essential shops closed, including restaurants and bars. A nighttime curfew running from 19:00 CET to 06:00 CET is also in force.

The new four-week lockdown was imposed last weekend to battle a surge in cases attributed to the spread of the British variant and which has put hospitals, and ICU units in particular, under serious strain.

A week later, the daily number of confirmed cases remains high with more than 43,280 infections detected on Saturday. The country has the second-highest COVID-19 death toll in the European Union after Italy at 98,602.

Twenty people were meanwhile arrested in Finland on Saturday as they protesters against measures to fight COVID-19.

About 300 people took part in the unauthorized protest in Helsinki — public gatherings of more than six people are currently banned in Finland to prevent the spread of the deadly virus.

The arrests were carried out after a police order to disperse was ignored.

Finland and its 5.5 million inhabitants have one of the best records against COVID-19 in Europe with a death toll of 866 and fewer than 114,000 cases confirmed.

But a rise in the incidence rate in mid-February prompted the authorities into taking additional measures, including closing restaurants.

Hundreds of people also gathered in the Danish capital Copenhagen on Saturday to protest their country's strategy against the virus and the introduction of a COVID passport.

Launched on Tuesday, the "coronapas" is given to people who have either been fully vaccinated, have tested positive for the virus two to 12 weeks previously or negative over the previous 72 hours.

It allows them to enter certain businesses including hairdressers, beauty salons and driving schools.

The protesters — who had rallied following a call by the "Men in Black" group — marched in a "relatively peaceful" way in the streets according to the authorities, before joining the city hall in the middle of the evening.

The country of 5.8 million has deplored the death of 2,436 people since the beginning of the pandemic and has recorded more than 235,000 cases.

Denmark has been under partial containment since late December. Even if several measures have been lifted since February, the quasi-general reopening is only tabled for May 21, a date chosen because it should correspond to the end of the vaccination of people over 50.

In Norway, where the government had tightened the screw before the Easter holidays in the face of a rebound in cases attributed to the British variant, about 200 demonstrators also protested Saturday in the center of the capital Oslo against the measures taken and burned masks.

No incidents with law enforcement were reported. Similar protests were also held in Vienna, Austria, and in the Romanian capital, Bucharest. — Euronews

These were the details of the news Arrests across Europe as people flout or protest COVID-19 restrictions for this day. We hope that we have succeeded by giving you the full details and information. To follow all our news, you can subscribe to the alerts system or to one of our different systems to provide you with all that is new.