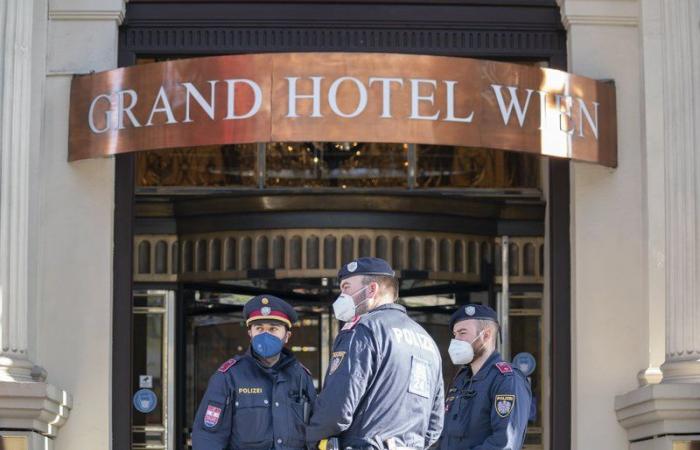 You are now following the details of the Positive atmosphere, little progress in Iran nuclear talks news and now we leave you with the details

Mohamed Nass - Cairo - BERLIN (AP) — Nascent talks aimed at bringing the United States back into the 2015 nuclear deal with Iran broke Friday without any immediate signs of progress on the thorny issues dividing Washington and Tehran, but with delegates talking of a constructive atmosphere and resolving to continue the discussions.

Two working groups that have been meeting in Vienna since Tuesday to brainstorm ways to secure the lifting of American sanctions and Iran’s return to compliance with the deal reported their initial progress to a joint commission of diplomats from the world powers that remain in the deal — France, Germany, Britain, China and Russia.

Russian delegate Mikhail Ulyanov tweeted that participants had “noted with satisfaction the initial progress made.”

“The commission will reconvene next week in order to maintain the positive momentum,” he said.

The talks took place without the United States, which unilaterally left the nuclear deal, known as the Joint Comprehensive Plan of Action, in 2018, under then-President Donald Trump. He embarked on a campaign of “maximum pressure” by restoring previous sanctions and adding new ones on Iran.

But an American delegation headed by the Biden administration’s special envoy for Iran, Rob Malley, also has been in the Austrian capital this week. Representatives from the other world powers have been shuttling between the US and the Iranians to facilitate indirect talks.

A senior State Department official said the overall atmosphere was “businesslike” and encouraging, but cautioned that the US is waiting for Iran to show it is serious about responding to the sanctions relief the Biden administration might offer. The official was not authorized to discuss the negotiations by name and spoke to reporters on condition of anonymity.

The official said that some non-nuclear sanctions, such as those related to terrorism, human rights and ballistic missiles, would remain in place. If Iran holds to a position that every single sanction imposed on it since the US withdrew from the deal must be lifted, the official said “we’re heading to an impasse.”

However, the official also left open the possibility that some non-nuclear sanctions could be lifted or eased because of the manner in which the Trump administration imposed them, including by using alternate authorities not covered by the deal.

The official said the previous administration had pursued the withdrawal from the deal with the “purposeful and self-avowed intent to make it difficult for any future administration” to return to it.

After the US withdrawal, Iran has been openly violating the deal’s restrictions, steadily increasing its stockpile of enriched uranium, increasing the purity it is enriching, and installing and operating new, more efficient centrifuges, among other things.

President Joe Biden, who was vice president under Barack Obama when the original deal was negotiated, has said he wants to bring the US back into the deal but that Iran must reverse its violations.

Iran argues that Washington’s departure from the deal was the first violation and that the US must make the first move and remove sanctions before Iran returns to compliance.

As the talks opened, China’s representative in Vienna, Wang Qun, backed the Iranian stance. “We, in China, have a saying to the effect that the one who ties the knot should be the one to undo it,” he said.

Complicating matters further, Tehran argues that the US needs to drop all sanctions, including measures not related to the deal and Iran’s nuclear program.

Iran’s ambassador to the International Atomic Energy Agency, Kazem Gharibabadi, showed no sign of backing off that position in comments posted Friday on the website of Iran’s Supreme Leader Ayatollah Ali Khamenei.

Still, Iranian Deputy Foreign Minister Abbas Araghchi told Iran’s Press TV on Friday that the talks in Vienna had not been fruitless.

Enrique Mora, the European Union official who chaired the talks, said he would continue to shuttle between the US and Iranian delegations, as well as others next week.

“The participants emphasized their resolve to further pursue the ongoing joint diplomatic effort,” he said in a statement.

The deal’s ultimate goal is to prevent Iran from developing a nuclear bomb, something it insists it does not want to do. Iran now has enough enriched uranium to make a bomb, but nowhere near the amount it had before the nuclear deal was signed.

In pulling the US out, Trump said the deal was a bad one and needed to be renegotiated to include other issues, like Iran’s ballistic missile program and regional influence. Those concerns are shared by other members of the agreement but they have maintained these issues should be addressed outside the nuclear deal. They are not part of the current talks.

America’s departure from the deal under Trump has also raised Iranian concerns that even if sanctions are dropped and Iran returns to compliance, the US could pivot again under a future president.

Gharibabadi said Iran raised that issue in the Vienna talks.

Meanwhile, issues looming in the near future may make negotiations even more complicated.

In late February, Iran began restricting international inspections of its nuclear facilities, but under a last-minute deal worked out during a trip to Tehran by Rafael Grossi, the head of the Vienna-based U.N. atomic watchdog, some access was preserved.

Under that agreement, Iran will no longer share surveillance footage of its nuclear facilities with the IAEA but has promised to preserve the tapes for three months. It will then hand them over to the IAEA if it is granted sanctions relief. Otherwise, Iran has vowed to erase the recordings, narrowing the window for a diplomatic breakthrough.

Iranian Foreign Minister Mohammad Javad Zarif in March also urged the US to act quickly, noting that as his country’s June presidential election approaches, Washington will find itself dealing with a government unable to make progress in the nuclear talks.

These were the details of the news Positive atmosphere, little progress in Iran nuclear talks for this day. We hope that we have succeeded by giving you the full details and information. To follow all our news, you can subscribe to the alerts system or to one of our different systems to provide you with all that is new.