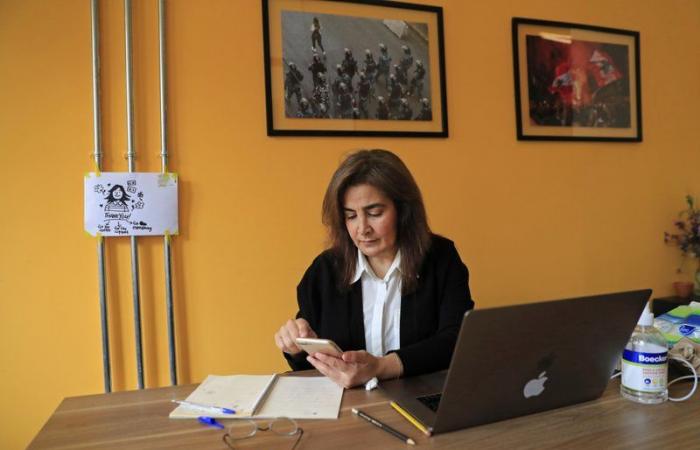 You are now following the details of the Loud debates, fun banter: Mideast finds outlet in Clubhouse news and now we leave you with the details

Hundreds of thousands of people in the Arab world are turning to Clubhouse, the fast-growing audio chat app, to mock and vent against longtime rulers, debate sensitive issues from abortion to sexual harassment, or argue where to find the best and cheapest shawarma sandwich during an economic crisis.

The discussions are endless as they are breathless.

More than 970,000 people from the Middle East have downloaded the new platform since it launched outside the U.S. in January. It has offered space for in-person conversations in an age where direct contact is at the mercy of the pandemic and it’s brought together those at home and the many in exile or abroad.

But mostly, it has offered a release for bottled-up frustration in a region where violent conflicts and autocrats have taken hold and where few, if any, avenues for change — or even for speaking out — seem tenable.

“It is an open coffeehouse that pierces through what is forbidden by the political regimes in the region,” said Diana Moukalled, a Lebanese journalist who closely follows social platforms. “Clubhouse has made people go back to debating one another.”

The Middle East accounts for 6.1 percent of the 15.9 million global downloads of Clubhouse, which launched in the United States a year ago. Saudi Arabia ranks no. 7 globally for the invitation-only downloads, with over 660,000, just after Thailand and before Italy, according to San Francisco-based mobile app analytics firm Sensor Tower.

One reason for its popularity seems to be the no-holds-barred atmosphere, fueled by the liveliness of group conversation.

Saudis organized rooms to discuss who could replace their aging king instead of his ambitious son, Crown Prince Mohammed bin Salman. They argued with Egyptians over what they considered democracy and with Lebanese and Jordanians over their kingdom’s perceived meddling in their affairs.

Other rooms tackle taboo topics ranging from atheism to homosexuality. A Saudi woman discussed whether abortions should be allowed in the kingdom, prompting a heated back and forth.

Minutes after reports of an attempted coup in Jordan last week, Jordanians inside and outside the country congregated in a room to share information on the confusing reports released and controlled by the government. Families of those arrested in the ensuing sweep shared their news. Some users defended King Abdullah while backers of the brother prince accused of the coup vowed to rally behind him.

Previously unimaginable debates took place among parts of society who would otherwise shun or block each other on other social media.

Opponents debated supporters of Lebanon’s powerful Hezbollah group. Elsewhere, Lebanese railed against private banks they blame for their country’s economic meltdown — with bankers in the room.

In another room, Iraqis — mainly exiles — criticized how their country’s many religious militias impacted their lives. The moderator, a woman from the southern Shiite city of Najaf now living in Europe, told how her conservative family tried to mold her into “being like them” and opposed sending her to universities where men and women mingle. She fended off one man who suggested she was exaggerating, telling him he hadn’t experienced what she did.

The moderator went on and named figures from powerful Shiite militias and religious leaders, saying she’d seen how they flout the rules they set for others. In the free-flowing conversation, militia supporters frequently interrupted, sparking a torrent of expletives from the moderator and others until they were forced to leave.

“They controlled the ground with their muscles,” the moderator said of the militias. “But social media need brains. This (space) is ours.”

Among the hundreds of rooms discussing the war in Syria, some users decided to lighten the mood. Opposition activists organized a spoof interview with someone posing as President Bashar Assad.

It drew laughs but also poignant reminders of how the 10-year conflict devastated the country. “I ran away from you and still you follow me to Clubhouse,” one exiled Syrian told the fake “Assad.”

But concerns are mounting that the open space could quickly come under the same government surveillance or censorship as other social media.

A decade ago, activists in the Arab Spring protests flocked to Twitter and Facebook, which offered a similar free space. Since then, authorities have come to use the sites to target and arrest critics and spread their own propaganda.

Oman has already blocked the Clubhouse app. In Jordan, it is obstructed on certain mobile networks, while in the United Arab Emirates, users have described unexplainable glitches.

Pro-government commentators have railed against Clubhouse in TV shows and newspapers, accusing it of helping terrorists plan attacks, spreading pornography or undermining religious and state figures.

“This room has grown because Salman’s people are here to defend him,” shouted a participant in a room featuring opponents of the Saudi crown prince.

A discussion of the release of imprisoned Saudi women’s rights activist Loujain al-Hathloul’s devolved into panicked mayhem when a few participants threatened to expose attendees and report them to authorities. The chat soon cut off.

Recordings surfaced online from Clubhouse conversations deemed offensive, such as about homosexuality becoming acceptable, fueling fears that pro-government Saudi users were keeping tabs on critics. One participant asked to leave a chat among Lebanese when it was discovered she was Israeli, in part because some users feared they could be prosecuted under Lebanese laws banning mixing with Israelis.

Some fear security agents are secretly in the rooms.

Most participants in the app, which remains exclusive to iPhone users, use real names and sometimes put detailed bios. But growing numbers use fake names.

Clubhouse’s “vague” policies also raise concerns, he said. The company says it temporarily stores conversations for investigating abuses. But it doesn’t say for how long or who reviews the Arabic content, raising questions whether unknown third parties may be involved, endangering participants’ security, he said.

Moukalled, editor of Daraj, an independent online media, said it would be no surprise if authorities impose surveillance on Clubhouse.

But, she said, something else would come along.

“So long as people don’t feel they are part of the decision-making process, they will find these platforms.”

These were the details of the news Loud debates, fun banter: Mideast finds outlet in Clubhouse for this day. We hope that we have succeeded by giving you the full details and information. To follow all our news, you can subscribe to the alerts system or to one of our different systems to provide you with all that is new.