BELFAST, April 9 — Britain today renewed appeals for calm after police in Northern Ireland faced another barrage of petrol bombs and rocks overnight in an ongoing week of violence.

The worst unrest of recent years in the UK-ruled province has mainly stemmed from its unionist community, angry over apparent economic dislocation due to Brexit and existing tensions with pro-Irish nationalist communities.

But last night saw riot police on the nationalist side of divided Belfast pelted with projectiles as they tried to prevent a crowd moving towards pro-UK unionists, an AFP journalist saw.

“There is no role for violence to resolve these issues,” Britain’s Transport Secretary Grant Shapps said the morning after, noting that parties from all sections of Northern Ireland had come together to denounce the unrest.

“We need to make sure that people are talking — but not through violence,” he told Sky News.

Despite similar appeals from Ireland, the United States and the European Union, crowds of hooded youths and young men have taken to the streets nightly, injuring at least 55 police officers and setting fire to a moving bus this week.

Officers using water cannon for the first time in years drove back the surging crowds late into the night, as locals peered out of their windows to witness the spectacle.

Refusing to let rioters approach, dozens of older men and women stood at the gates of a “peace line” — walls in Belfast separating nationalist and unionist communities.

On Wednesday night, the gates were set alight and police said crowds from either side broke through to attack each other with petrol bombs, missiles and fireworks.

“The British do whatever the hell they want to do and we get landed with everything afterwards,” she told AFP.

Until a landmark peace deal in 1998, Northern Ireland endured 30 years of sectarian conflict that killed 3,500 people.

The accord let unionists and nationalists coexist by blurring the status of the region within the EU.

But Britain’s 2016 vote to quit the EU revived the need for border checks on trade, potentially undermining the 1998 pact.

A special “protocol” was agreed that shifted controls away from the Irish land border to ports trading with the UK mainland. It took effect on January 1, prompting many unionists to accuse London of betrayal by diluting Northern Ireland’s status in the UK.

There was also recent outrage among unionists after Northern Irish authorities decided not to prosecute nationalist Sinn Fein leaders for attending a large funeral last year of a former paramilitary leader, in apparent breach of Covid restrictions.

“Destruction, violence and the threat of violence are completely unacceptable and unjustifiable, no matter what concerns may exist in communities,” said the Northern Ireland executive — made up of unionist, nationalist and centrist parties.

“While our political positions are very different on many issues, we are all united in our support for law and order.”

He was set for further talks today, after conceding there is concern about the EU protocol, which Foster’s party wants to scrap.

“I absolutely recognise the challenge and the sense of identity challenges that people in the unionist community have felt around the protocol and the practical out-workings of it,” he said.

These were the details of the news Rioters in Northern Ireland ignore pleas for calm for this day. We hope that we have succeeded by giving you the full details and information. To follow all our news, you can subscribe to the alerts system or to one of our different systems to provide you with all that is new. 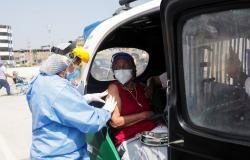 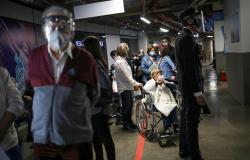