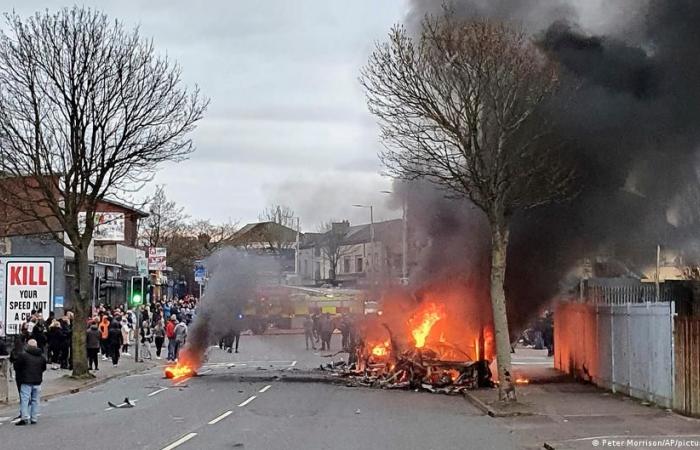 You are now following the details of the Northern Ireland: Protesters burn bus amid violence news and now we leave you with the details

Mohamed Nass - Cairo - Crowds of mostly young men in a pro-British area of the Northern Irish city of Belfast set a hijacked bus on fire with petrol bombs and attacked police with stones in the latest outbreak of violence that erupted last week.

Videos circulating on social media showed the bus being hit with incendiary devices and later completely burning out.

According to several media reports, a press photographer was also attacked.

In recent days protesters have burned cars and hurled Molotov cocktails and chunks of stone at police in several towns across Northern Ireland.

Violence last week flared in the city of Londonderry, before spreading to the capital of Belfast and outlying areas over Easter weekend and into Monday.

Police responded by forming ranks with riot shields and armored vehicles to retake the streets, arresting teens and young adults.

The renewed violence comes amid growing frustration in the pro-British unionist community at new trade barriers between Northern Ireland and the rest of the United Kingdom that resulted from Britain’s exit from the European Union.

A generation ago, Belfast was enveloped in conflicts between those advocating for Irish independence and those loyal to Britain.

Belfast was the center of the so-called Troubles between 1969 and 2001, when over 1,600 people were killed in sectarian conflicts throughout the divided and militarily occupied city.

The Good Friday Agreement of 1998 is largely credited with ending what had become a low-level civil war.

But memories of the violent past loom over the present as the region remains deeply divided.

The violence on Wednesday took place near the Shankill Road in west Belfast near a so-called “peace wall” that divides the most Protestant unionist community from the mainly Catholic Irish nationalist stronghold of the Falls Road, where groups of youths also gathered.

The pro-British Democratic Unionist Party (DUP) said the recent clashes stem from a decision by police not to prosecute members of the Irish nationalist Sinn Fein party for attending a large funeral of a former Irish Republican Army paramilitary leader in an apparent breach of COVID-19 restrictions.

“These actions do not represent unionism or loyalism. They are an embarrassment to Northern Ireland,” DUP leader Arlene Foster wrote in a Twitter post that went on to describe rivals Sinn Fein as “the real law breakers.”

Sinn Fein in turn blamed the DUP for stoking tensions with their staunch opposition to new Brexit-mandated trading arrangements. They have called in recent days for the region’s police chief to step down.

What role does Brexit play in the violence?

The 1998 Good Friday peace accords let unionists and nationalists coexist by blurring the status of the region, dissolving border checks with the fellow European Union member state of the Republic of Ireland.

But the UK decision to leave the bloc threatened to upset the fragile peace by requiring the return of border controls.

Negotiators agreed to a special “protocol” for Northern Ireland, shifting checks away from the land border to Northern Irish ports.

The new checks  —  which effectively keep Northern Ireland in the EU’s customs union and single market — have disrupted trade with the UK.

Though Prime Minister Johnson’s spokesman declined to comment on what’s driving the unrest, Belfast Telegraph correspondent Allison Morris wrote that rioters have little interest in the complexities of UK-EU trade, “but they do know they’re angry.”

“They do understand that they have been betrayed by the very British government that their parents, grandparents and great-grandparents were slavishly loyal to,” she wrote.

Fresh graffiti has appeared in unionist areas depicting the gun crosshairs symbol and the phrase “all bets are off.”

These were the details of the news Northern Ireland: Protesters burn bus amid violence for this day. We hope that we have succeeded by giving you the full details and information. To follow all our news, you can subscribe to the alerts system or to one of our different systems to provide you with all that is new.