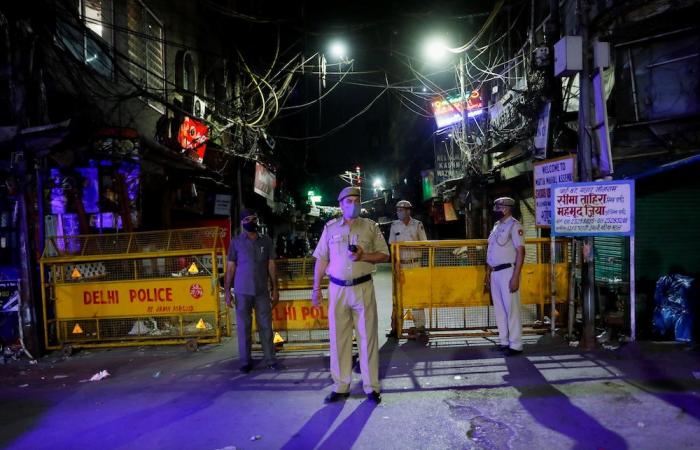 Alarm has grown since India passed more than 100,000 new cases in a single day for the first time on Monday.

New Delhi, home to 25 million people, and other major cities have all ordered a clampdown on public movement.

The ban will be in place each night from 10:00pm to 5:00am through the end of April, with only essential services or people travelling to and from vaccination centres allowed on the streets.

After the start of the curfew late yesterday, shops and street vendors that would usually be open were closed, but there was still a regular amount of night traffic on some roads.

Madhulika Singh, a 19-year-old student, said the curfew could help reduce the number of large gatherings in the city.

Some Delhi residents however have expressed doubts about how effective the new restrictions will be in reducing the spread of the virus.

“Most people who are going to get Covid are going to get it in the day when they are out and about... The night curfew is not going to change anything much,” financial consultant Arvind Khanna, 62, told AFP.

“India is a very populated country and Delhi is one of the most populated cities in the world. So there really is no effective way. People just need to follow the rules — wear a mask, use sanitiser, keep the distance,” added 18-year-old student Angel Miyamoto.

Delhi reported 3,548 new positive cases on Monday, still below its peak of nearly 9,000 in November, when it was one of the worst-hit cities across the nation of 1.3 billion people.

The government has so far shied away from a repeat of the nationwide restrictions imposed in March last year — one of the world’s toughest lockdowns — as it seeks to revive the country’s devastated economy.

But India’s wealthiest state Maharashtra, which includes Mumbai, on Sunday announced a weekend lockdown and night curfew on its population of 110 million.

The state currently accounts for more than half of new cases reported each day nationwide.

Vinod K Paul, a member of the government advisory body NITI Aayog, said late yesterday during a health briefing that the next four weeks would be very critical for the country.

India, which has the world’s third-highest number of infections after the United States and Brazil, has reported almost 12.7 million cases and more than 165,000 deaths.

Single-day infections have been rising since early February, when they fell to below 9,000.

The country has recorded more than 549,000 cases in the last seven days — an increase of 40 per cent compared to the previous week, according to data compiled by AFP.

Brazil recorded just under 440,000 cases and the United States reported just over 453,000, but both with a decreasing trend from the previous week.

India’s health ministry said yesterday that more than 83 million vaccination shots have been administered as part of an ambitious drive to inoculate 300 million by the end of July.

Delhi has meanwhile ordered one-third of all its vaccination sites at government hospitals to open around-the-clock to speed up the pace of inoculation.

These were the details of the news New Delhi under pandemic night curfew for this day. We hope that we have succeeded by giving you the full details and information. To follow all our news, you can subscribe to the alerts system or to one of our different systems to provide you with all that is new.