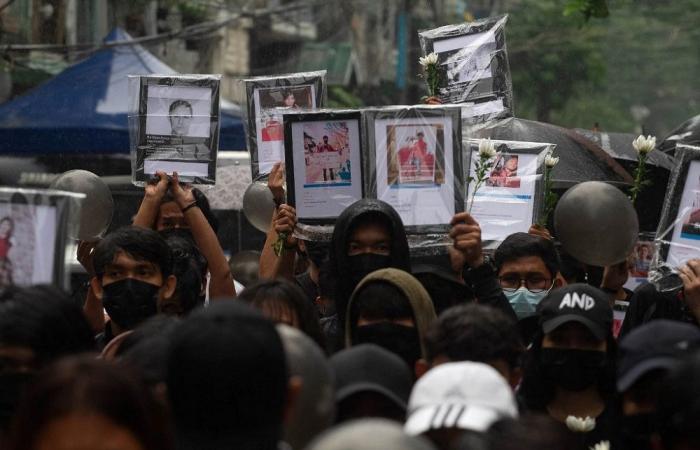 Hello and welcome to the details of Myanmar protesters paint Yangon red, defying bloody army crackdown and now with the details

YANGON, April 6 — Opponents of Myanmar’s military junta sprayed red paint on roads in the country’s biggest city today to mark the deaths of hundreds of “martyrs” killed by troops, as the crisis dragged on with no clear diplomatic solution in sight.

Some 570 people have been killed during nearly two months of unrest since the military coup on February 1, and security forces have arrested close to 3,500 people, with about four-fifths of them still in detention, advocacy group the Association for Political Prisoners (AAPP) said today.

Demonstrators woke early in Yangon to spray and splash pavements, roads and bus shelters with red paint in protest at a sweeping crackdown by security forces that has caused weeks of international outrage.

“The blood has not dried,” said one message in red.

Another daubed across a bus shelter took aim at rank-and-file soldiers who it said were being exploited by kleptocratic generals.

“Don’t kill people just for a small salary as low as the cost of dog food,” it said.

Anger has swept Myanmar in the past two months over the return of a military government and an abrupt end to a brief era of democratic and economic reform and international integration that was absent under the military’s oppressive 1962-2011 rule.

Some protesters have called their movement a “spring revolution”, characterised by street marches, quirky acts of non-violent rebellion and civil disobedience campaigns aimed at crippling the government apparatus.

Their ability to organise may have been hampered in recent days by the military’s halt of broadband wireless internet, adding to a weeks-long block of mobile data services which had been the main channel for spreading word of what was happening in the country during the crackdown.

Those able to access social media, including some journalists, today shared pictures of striking workers marching for a second day in the city of Mandalay, some wearing gas masks and giving the three-finger salute that has become a symbol of resistance to army rule.

Authorities have issued arrest warrants for dozens of celebrities, models and influencers, and today a popular comedian was arrested in Yangon, the Mizzima news site reported.

Sithu Aung Myint, a prominent journalist, was on the wanted list. Writing on Facebook, he said he was proud to be considered a threat.

“When the coup council who have been committing crimes announces you as a lawbreaker together with the whole country, you will be more than happy because you are recognised as a hero in this revolution,” he wrote.

“Your next generation will be proud of you.”

Protesters and workers have come out daily against the military takeover, which followed several years of awkward power-sharing between generals and Suu Kyi’s civilian government under a democratic system created by the army.

Suu Kyi’s party won an election by landslide in November, and had pledged to change the constitution to reduce the military’s political clout.

Despite the election commission saying the vote was fair, the military justified its coup by alleging that the ballot was fraudulent, and has promised to hold a new election at an unspecified time.

“Democracy is based on the wish of the majority, but such a wish must be authentic with honest politics,” it said.

Min Aung Hlaing has sought to play down the unrest and dismissed international concern as misplaced, calling it an internal issue that the military was handling with “utmost restraint”.

Western countries have called for a restoration of Suu Kyi’s government, a position echoed by only a handful of Myanmar’s regional neighbours.

Brunei, the chair of the 10-member Association of Southeast Asian Nations (Asean) yesterday agreed to a meeting of its leaders over the crisis in Myanmar, though no date was set,

Asean operates by consensus but the divergent views of its 10 members on how to respond to the army’s use of lethal force against civilians and the group’s policy of non-interference has limited its ability to act. — Reuters

These were the details of the news Myanmar protesters paint Yangon red, defying bloody army crackdown for this day. We hope that we have succeeded by giving you the full details and information. To follow all our news, you can subscribe to the alerts system or to one of our different systems to provide you with all that is new.