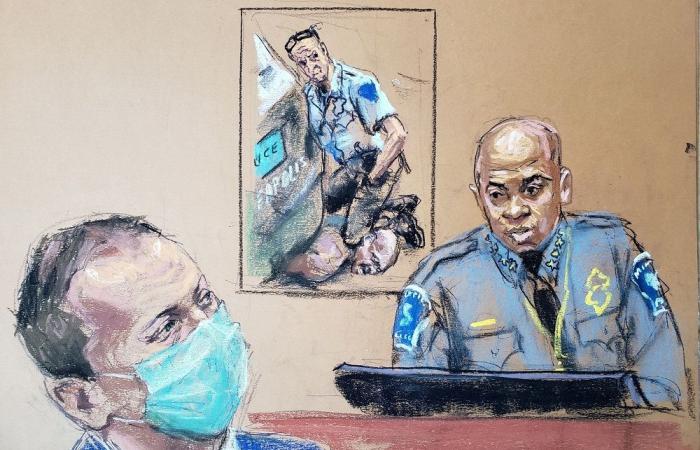 Hello and welcome to the details of Kneeling on Floyd’s neck violated policy, ‘values’, says Minneapolis police chief and now with the details

Arradondo, called as a prosecution witness at Chauvin’s murder trial, said the use of force against Floyd was reasonable during the “first few seconds” of his May 25, 2020 arrest but it should have ended quickly.

“It is contrary to our training to indefinitely place your knee on a prone, handcuffed individual for an indefinite length of time,” the police chief of the Minnesota city said.

“Once Mr. Floyd had stopped resisting, and certainly once he was in distress and trying to verbalise that, that should have stopped,” Arradondo said.

The 45-year-old Chauvin, who is white, was seen in a video taken by a bystander kneeling on the neck of a handcuffed Floyd for more than nine minutes as the 46-year-old African-American man complained repeatedly that he “can’t breathe.”

Arradondo, 54, Minneapolis’s first Black police chief, fired Chauvin and the three other officers involved in the arrest that led to Floyd’s death the day after the incident.

The harrowing video of Floyd’s arrest touched off protests against racial injustice and police brutality in the United States and around the world.

Chauvin has pleaded not guilty to charges of murder and manslaughter.

Another senior Minneapolis police officer, Inspector Katie Blackwell, testified yesterday about the training in the use of force that Chauvin and other officers received.

Blackwell, who headed the police training unit, was shown a picture of Chauvin kneeling on Floyd’s neck and asked if that was an approved neck restraint.

“I don’t know that kind of improvised position that is,” she said. “It’s not what we train.”

Eric Nelson, Chauvin’s attorney, introduced video at one point that he said showed Chauvin’s knee on Floyd’s shoulder blade and not on his neck.

Prosecutors countered that the video depicted the moment when paramedics arrived and Chauvin had removed his knee from Floyd’s neck to get up.

Also testifying yesterday was the doctor who treated Floyd when he was brought to the emergency room at the Hennepin County Medical Centre.

Bradford Wankhede Langenfeld said Floyd was in cardiac arrest when he arrived and 30 minutes of efforts to revive him were unsuccessful.

He said a lack of oxygen was the most likely reason Floyd’s heart had stopped beating.

“I felt that hypoxia was one of the more likely possibilities,” Langenfeld said.

Prosecutors are seeking to prove that Floyd’s death was due to asphyxiation while Chauvin’s defence attorney claims it was due to illegal drugs in his system.

Langenfeld said the two paramedics who brought Floyd to the hospital did not mention any drug use or the possibility that he had overdosed.

Arradondo and Blackwell were the latest police officers to be called by the prosecution to testify against Chauvin.

Lieutenant Richard Zimmerman, the longest-serving officer in the Minneapolis Police Department, testified last week that Chauvin’s use of force against Floyd was “totally unnecessary.”

Zimmerman said he had reviewed bystander and police bodycam video of Floyd’s arrest and Chauvin had violated department policies on the use of force.

“Pulling him down to the ground facedown and putting your knee on a neck for that amount of time, it’s just uncalled for,” Zimmerman said.

The first five days of the trial also featured emotional testimony from bystanders who witnessed the arrest and urged Chauvin to remove his knee from Floyd’s neck.

The nine-woman, five-man jury hearing the case in a heavily guarded Minneapolis courtroom has also been repeatedly shown the graphic video of Floyd’s arrest.

Chauvin faces up to 40 years in prison if convicted of the most serious charge — second-degree murder.

The other three former police officers involved in the arrest — Tou Thao, Thomas Lane, and J. Alexander Kueng — are to be tried separately later this year. — AFP

These were the details of the news Kneeling on Floyd’s neck violated policy, ‘values’, says Minneapolis police chief for this day. We hope that we have succeeded by giving you the full details and information. To follow all our news, you can subscribe to the alerts system or to one of our different systems to provide you with all that is new.