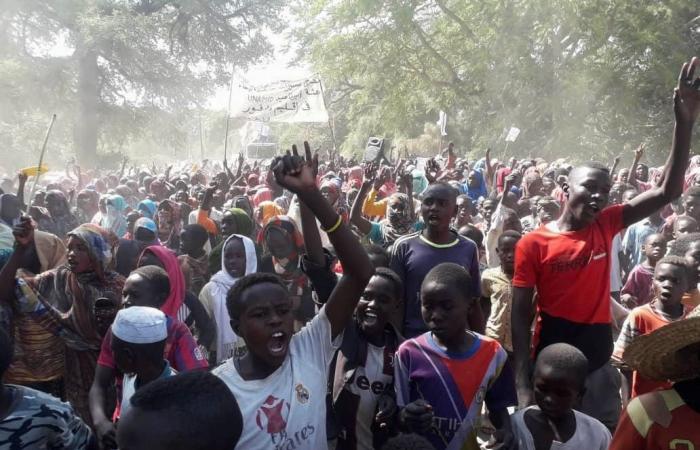 The violence between the Arab Rizeigat tribe and the Masalit in Genena, the provincial capital of West Darfur province, followed the death of two people from the Masalit, said Salah Saleh, a physician and former medical director at the city’s main hospital.

The circumstances of their death were not immediately known, he said, adding that the violence then extended to other neighborhoods of the city.

The Sudanese doctors’ committee in West Darfur says at least 54 people were wounded in the clashes, which continued on Monday. It said armed men also opened fire on an ambulance late Sunday, wounding three healthcare workers.

A spokesman for the government was not immediately available for comment.

Adam Regal, a spokesman for a local organization that helps run refugee camps in Darfur, said a shell hit a camp for displaced people in Genena on Monday, causing a fire that burned several houses. He shared a footage showing flams and thick clouds of black smoke.

“The situation is very difficult and grave,” he said.

The clashes pose a challenge to efforts by Sudan’s transitional government to end decades-long rebellions in areas like Darfur.

Earlier this year, tribal violence in West Darfur and South Darfur provinces killed around 470 people. It also displaced more than 120,000 people, mostly women and children, including at least 4,300 who crossed into neighboring Chad, according to the U.N.

Sudan is on a fragile path to democracy after a popular uprising led the military to overthrow longtime autocratic President Omar al-Bashir in April 2019. A military-civilian government now rules the country.

These were the details of the news Medical group says tribal clashes in Sudan’s Darfur kill 18 for this day. We hope that we have succeeded by giving you the full details and information. To follow all our news, you can subscribe to the alerts system or to one of our different systems to provide you with all that is new.