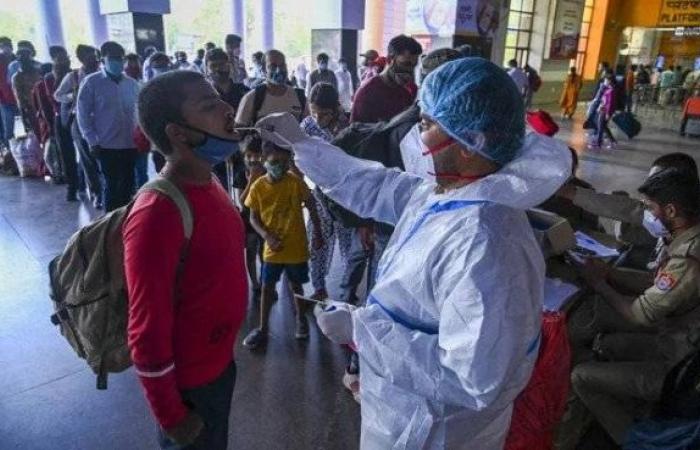 We show you our most important and recent visitors news details India announces record 103,558 new COVID-19 cases as second wave hits in the following article

Hind Al Soulia - Riyadh - NEW DELHI — A familiar scene is taking place across India. In large cities, hospital beds are filling up with COVID-19 patients. Warehouses, unused trains, and large public spaces are being converted into makeshift treatment centers. And restrictions are clamping back down, with new lockdowns in place.

India has plunged into its second wave — and this time, with new variants, fatigue setting in among the population, and several massive religious gatherings taking place, it threatens to be worse than the first one.

The country recorded 103,558 new cases on Monday, according to the Indian Ministry of Health — the highest single-day figure since the beginning of the pandemic.

The previous record high had been in September last year, with nearly 98,000 cases in a day during the peak of the first wave. Daily cases had gradually fallen by nearly 90% to reach about 9,000 cases a day in mid-February — which was hailed as a sign that the country had controlled its outbreak.

"There is a shortage of private beds and beds in major government setups," said Deepak Baid, president of the Association of Medical Consultants in Mumbai. "Because beds aren't available, actually many patients are still in-home quarantine, patients are getting admitted in non-Covid hospitals when they are positive."

Monday's figures raise the country's total since the beginning of the pandemic to more than 12.5 million cases and 165,000 related deaths, according to data from Johns Hopkins University.

"Covid cases in India are rising very sharply at this time, very different from a year ago when the rate of increase seemed a lot less rapid," said Ramanan Laxminarayan of the Center for Disease Dynamics, Economics and Policy in New Delhi.

One major difference is that when the first wave began rising in late spring last year, the country was just emerging from a months-long lockdown that had closed state borders, shut down national travel, and brought businesses to a halt. The stringent lockdown and gradual, phased easing of restrictions "significantly slowed" the infections, said Laxminarayan — which is "not the case now."

There are some factors that could help lessen the impact this time around: the medical infrastructure is better prepared now, and staff have experience on their side, which could lower the mortality rate even if the case rate increases. The country's vaccination program is also underway, with two vaccines approved for use. And in big cities that have been hard hit before, like Delhi and Mumbai, people who have already been infected before may have some natural immunity.

But still, Laxminarayan said, "that is not going to be sufficient to prevent a second wave of cases."

Authorities rushed to reimpose restrictions over the weekend in hard-hit states. The western state of Maharashtra is the main concern, accounting for nearly 60 percent of all of India's new cases over the last two weeks, officials said. And eight of the top ten worst-affected districts nationwide are in Maharashtra, including its capital, Mumbai.

Several other states have also seen the virus spread in recent weeks, including Karnataka, Chhattisgarh, Kerala, and Punjab.

Prime Minister Narendra Modi held a high-level meeting on Sunday to discuss the rise in infections, according to a news release by his office. He urged states and authorities to "avoid mortality under all circumstances" by "ramping up" equipment and infrastructure, like oxygen availability and ventilators in hospitals.

Modi also directed a team of public health specialists to be sent to Maharashtra, instructing hard-hit states to take action so that "the collective gains of Covid-19 management in the country in the last 15 months are not squandered," said the release.

There are several reasons Maharashtra has seen such a dramatic spike, said Randeep Guleria, director at the All India Institute of Medical Sciences. As one of the country most populated cities, with about 18.3 million residents, public spaces are often crowded.

It's also an industrial and transport hub, home to international businesses and many migrant workers, meaning there is frequent movement in and out of the state.

Maharashtra also has a high level of statewide testing and a good health system, which could mean it's better at detecting cases than in other parts of the country, said Laxminarayan. "You see this consistently, that states with better health systems and with more urbanized populations will see more coronavirus cases," he said.

And across India, the winter success, vaccine rollout, and sense of fatigue have culminated in a dangerous complacency, said Oommen Kurian, senior fellow and head of health initiative at the Observer Research Foundation in New Delhi. Authorities became less alert, people went out more, and the public were looser with precautions such as social distancing and mask-wearing.

All this comes as the government races to meet its vaccination goals. India began its rollout in January, pledging to administer 600 million shots by August. So far, nearly 76 million doses have been administered, with less than 1 percent of the country's 1.3 billion population fully vaccinated, according to Johns Hopkins University.

"With all this discussion of vaccines and India's role as a major producer, many people think that the virus is losing the battle, and are letting their guard down," Kurian said. "Unfortunately, that doesn't seem to be the case."

Experts warn that cases may balloon in the coming weeks, due to a number of large gatherings and congregations in several states.

The largest and most well-known is the Kumbh Mela, one of the most important Hindu celebrations. The largest religious pilgrimage on Earth, it's taking place this year in the city of Haridwar, in Uttarakhand state. Daily attendance is estimated to reach up to one million people on "regular" days, and up to five million visitors on "auspicious" days.

State and federal authorities have already taken measures to help contain the risk -- visitors must register online and provide a negative COVID-19 test to participate in the holy baths in the Ganges River. Thousands of officers have been deployed for security and surveillance during the festival, with the public urged to follow precautions and wear masks.

But experts and medical workers worry that it may not be enough to prevent a spike in cases. After all, most people take off their masks when they dip into the sacred waters, and photos show crowds packed tightly together during evening prayers and other ceremonies.

There are also state elections taking place across the country for legislative assemblies, local bodies, and both houses of parliament. Many political figures have hit the campaign trail to hold rallies, often speaking to crowds of people packed together.

On Saturday, a day before his COVID-19 meeting with federal officials, Prime Minister Modi attended a rally in Tamulpur, in northeastern Assam state, campaigning for his ruling Bharatiya Janata Party. Videos posted on Modi's social media accounts show hundreds, if not thousands, of attendees, clapping and cheering, many without masks.

All large gatherings — not just religious or political ones — are "at risk of being super-spreader events," said Laxminarayan, who pointed to massive weddings that have also taken place.

Finally, scientists and authorities are keeping their eye on new variants, which have been emerging around the world. More than 770 cases of "variants of concern" have been identified in India as of late March, according to the country's health ministry.

Variants are "the big unknown," and scientists are still investigating their effects and qualities, said Laxminarayan. The main question now is whether the variants circulating in India are deadlier or more infectious and if existing vaccines work against them. If any variants can bypass India's vaccines, it could "set up the country for a very challenging situation in the weeks and months ahead."

So far, the two vaccines being rolled out in India, Covaxin, and Covishield, have proved effective against the variants first detected in the UK and Brazil, according to the government-run Indian Council of Medical Research. Results have not yet been released for other common variants, including the one first detected in South Africa. — Courtesy CNN

These were the details of the news India announces record 103,558 new COVID-19 cases as second wave hits for this day. We hope that we have succeeded by giving you the full details and information. To follow all our news, you can subscribe to the alerts system or to one of our different systems to provide you with all that is new.