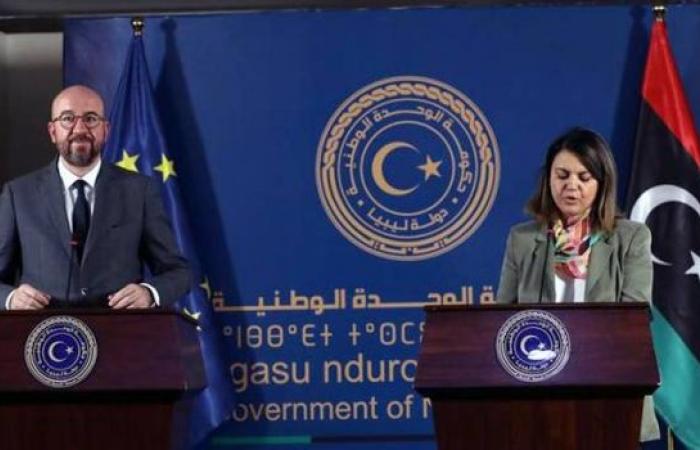 We show you our most important and recent visitors news details El-Mangoush, Michel stress mercenaries departure from Libya 'precondition' to stability’ in the following article

Hind Al Soulia - Riyadh - TRIPOLI — Libyan Foreign Minister Najla El-Mangoush reiterated her assertion that the strategy of the national unity government in her country is clear and serious towards the immediate departure of foreign mercenaries from Libyan lands.

During a joint press conference Sunday here with the President of the European Council Charles Michel, El-Mangoush called on all countries to accelerate the return and reopening of their embassies and consulates to quickly provide their services to Libyan citizens and foreigners as well.

She also affirmed that the role of the National Unity government is to achieve stability and create appropriate conditions, at different levels, to hold elections on time.

Michel too called for the withdrawal of all foreign fighters from Libya. He also voiced support for the unity government, which hoped to bring together rival factions.

"You have created an opportunity to rebuild your country, but there is one precondition — all foreign fighters and troops must leave the country," Michel said at the news conference.

He urged the Libyan political and armed factions to seize the "unique opportunity to build a sovereign, stable and prosperous country."

Calls for foreign fighters to depart have grown in recent weeks. According to the United Nations, some 20,000 mercenaries and foreign fighters remained in the North African country in early December.

A January deadline for their withdrawal was largely ignored. The country descended into chaos, mired in multiple rounds of conflict after its longtime dictator Muammar Qaddafi was toppled and killed in 2011.

The two main camps, each backed by foreign powers, have controlled the eastern and western parts of Libya. The fighting came to a halt last year, and both sides agreed on a formal ceasefire in October. This was followed by a new government of National Unity, approved by the Libyan parliament last month.

The unity government is tasked with taking over from the rival administrations and merging Libya's divided state institutions. It is also responsible for steering the country to new elections in December and tackling a dire security situation.

"We will work with the new government and support it," Michel said after meeting with interim Prime Minister Abdul Hamid Dbeibah who was selected in an UN-sponsored peace process.

"The European Union actively supports the process of national reconciliation," Michel said. "Economic recovery, elections, the fight against illegal immigration... are areas in which the EU can help."

Migration, he added, was a "major theme" in the relationship between Libya and the EU.

The foreign ministers of France, Germany, and Italy visited Tripoli in a show of support for Libya's newly formed government.

France reopened its embassy in Libya last month, while Greek Prime Minister Kyriakos Mitsotakis is expected to visit Tripoli next week to reopen the country's embassy. His visit will coincide with that of Italian Prime Minister Mario Draghi.

He also said the EU would donate 50,000 COVID-19 vaccines, which would add to the delivery earlier Sunday of 100,000 doses of the Russian Sputnik V jab, the first batch to arrive.

Libyan authorities have officially reported over 160,000 cases of the coronavirus among its seven million population, with more than 2,700 dead. — Agencies

These were the details of the news El-Mangoush, Michel stress mercenaries departure from Libya 'precondition' to stability’ for this day. We hope that we have succeeded by giving you the full details and information. To follow all our news, you can subscribe to the alerts system or to one of our different systems to provide you with all that is new.