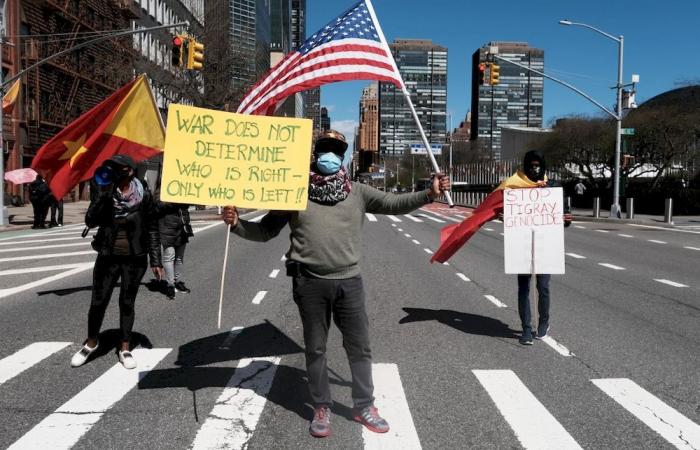 “We welcome the recent announcement from (Ethiopian) Prime Minister Abiy that Eritrean forces will withdraw from Tigray,” the G7 foreign ministers said in a statement released in Berlin.

“This process must be swift, unconditional and verifiable.”

Abiy, winner of the Nobel Peace Prize, sent troops into Tigray in November to detain and disarm leaders of the once-dominant regional ruling party, the Tigray People’s Liberation Front (TPLF).

He said the move came in response to TPLF-orchestrated attacks on federal army camps.

Abiy declared victory within weeks, but combat has continued recently in central and southern Tigray, conflict-prevention group ICG said Friday in a briefing published nearly five months after the first shots were fired.

Addis Ababa and Asmara long denied Eritreans were active in Tigray at all, contradicting testimony from residents, rights groups, aid workers, diplomats and even some Ethiopian civilian and military officials.

Amnesty International and Human Rights Watch (HRW) have accused Eritrean troops of massacring hundreds of people in the Tigrayan town of Axum in November.

AFP has separately documented a massacre allegedly carried out by Eritrean troops in the town of Dengolat, also in November.

Tigray’s interim leader, Mulu Nega, told AFP this week that withdrawal was “a process” and would not happen immediately.

Residents of several Tigrayan cities and towns told AFP this week that Eritreans appeared to have actually ramped up their presence in some areas.

At least four truckloads of Eritrean soldiers have arrived in the town of Edaga Hamus since last weekend, said one resident who asked not to be named for safety reasons.

“Since the Eritrean soldiers have arrived back in Edaga Hamus I have been unable to leave my house for fear that they would kill me if they find me on the street,” the resident said.

“However, I may soon need to go out of my house in search of food items for me, my wife and my two kids or else all of us will starve to death.”

More Eritrean troops have also recently arrived in the town of Senkata, though it was unclear if they would stay, said a resident who spoke on condition of anonymity as well.

“There is anxiety that the Eritrean soldiers are preparing a large-scale confrontation,” the resident said.

Asked about the status of Eritrea’s withdrawal, Eritrean information minister Yemane Gebremeskel told AFP via email this week that Abiy’s statements were “unequivocal and unambiguous”.

In its briefing Friday, ICG warned that fighting risked dragging on for months and even years, with both sides eyeing a military “knockout blow” that appears unrealistic.

The number of fighters loyal to the TPLF is likely swelling because of rising fury over atrocities, it said.

Most TPLF leaders remain on the run and ICG noted that none were reported captured or killed in February or March.

The resistance is “entrenched” and enjoys popular support from Tigrayans angry over mass killings and rapes, including those committed by soldiers from Eritrea, the TPLF’s bitter enemy, ICG said.

Mulu, who was appointed by Abiy, has previously acknowledged that the Tigrayan population has “mixed feelings” about his administration’s presence in the region.

He and other officials, though, have said assumptions that the TPLF enjoys widespread popular support are misguided and have downplayed its potential to mount an effective insurgency.

Access restrictions for humanitarian workers, researchers and journalists have made it difficult to determine a death toll for the fighting so far.

But myriad reports have emerged of massacres, extrajudicial killings and sexual violence.

Abiy’s government has said it is committed to investigating such crimes.

On Thursday researchers at Ghent University in Belgium published a paper saying they had identified 1,942 civilian casualties, only three per cent of whom died in shelling and air strikes.

They also included a list of 151 “massacres” in which at least five unarmed civilians were killed.

The researchers’ findings could not be independently verified.

ICG said in its briefing that peace talks seem unlikely in the immediate term, but called on the US, the EU and the African Union to push for a cessation of hostilities and expanded humanitarian access. — AFP

These were the details of the news G7 urges rapid Eritrean withdrawal from Tigray as ‘stalemate’ looms for this day. We hope that we have succeeded by giving you the full details and information. To follow all our news, you can subscribe to the alerts system or to one of our different systems to provide you with all that is new.