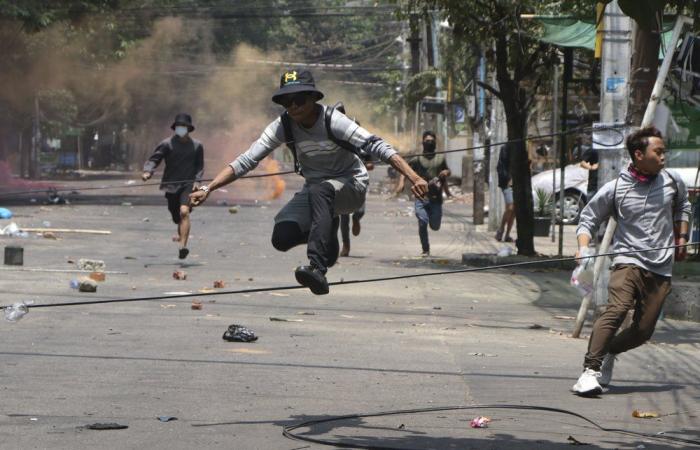 The action follows conflict in eastern Myanmar, where Karen guerrillas seized an army outpost Saturday and Myanmar’s military followed with airstrikes that killed about 10 villagers and drove thousands more across the border into Thailand.

After the airstrikes, the Karen National Union issued a statement from one of its armed units saying Myanmar military “ground troops are advancing into our territories from all fronts” and it may have to respond. The KNU is the main political body representing the Karen minority.

The conflict in eastern Myanmar expanded the crisis regionally, as an estimated 3,000 Karen took temporary shelter in neighboring Thailand. Thai authorities said Wednesday only about 200 remained in the country and were preparing to go back across the border.

Leaders of the protest movement against the military’s Feb. 1 ouster of the elected government of Aung San Suu Kyi have been seeking an alliance with the ethnic minorities’ armed groups to boost pressure on the junta. They would like them to form what they are calling a federal army as a counterweight to the government armed forces.

It is unclear what, if any, progress has been made toward that goal, though several of the major groups — including the Kachin, the Karen and the Rakhines’ Arakan Army in western Myanmar — have publicly denounced the coup and said they will defend protesters in the territory they control.

More than a dozen of Myanmar’s ethnic minorities have been seeking greater autonomy for decades, going through cycles of armed conflict and uneasy ceasefires.

The Kachin Independence Army, the armed wing of the Kachin Independence Organization, attacked a police station in Kachin state’s Shwegu township before dawn in Wednesday, local outlets The 74 Media and Bhamo Platform reported. The attackers were reported to have seized weapons and supplies and wounded one police officer.

The Kachin have staged a series of attacks on government forces since the coup, saying the latest round of fighting was triggered by government assaults on four Kachin outposts. After one Kachin attack in mid-March, the military retaliated with a helicopter attack on a Kachin base.

Protests meanwhile continue in Myanmar’s cities against the military takeover that reversed a decade of progress toward democracy in the Southeast Asian country that followed five decades of army rule.

Anti-coup protesters marched through an area of Yangon on Wednesday despite reduced numbers in the face of the ever-climbing death toll.

At least 521 protesters have been killed since the coup, according to Myanmar’s Assistance Association for Political Prisoners, which counts those it can document and says the actual toll is likely much higher. It says 2,608 people have been detained, a total that includes Suu Kyi.

The mainly young demonstrators processed through the city’s Hlaing suburb, stopping to honor a protester killed in an earlier confrontation with security forces.

The US State Department on Tuesday ordered non-essential US diplomats and their families to leave Myanmar, expecting the protests to continue. The US earlier suspended a trade deal and imposed sanctions on junta leaders as well as restricted business with military holding companies.

Image: Anti-coup protesters run to avoid military forces during a demonstration in Yangon, Myanmar on Wednesday March 31, 2021. The Southeast Asian nation has been wracked by violence since the military ousted a civilian-led government on February 1 and began to forcibly put down protests. (AP Photo)

These were the details of the news Attack by Myanmar’s Kachin minority signals deepening crisis for this day. We hope that we have succeeded by giving you the full details and information. To follow all our news, you can subscribe to the alerts system or to one of our different systems to provide you with all that is new.