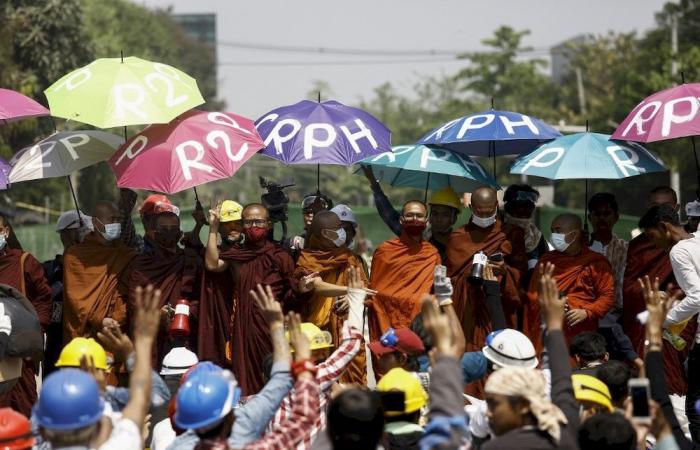 The country has been in turmoil since the military ousted the Nobel laureate in a lightning putsch on February 1, triggering an uprising demanding a return to democracy.

Before dawn today, the Yangon offices of her National League for Democracy (NLD) were hit by a Molotov cocktail, which caused a brief fire.

The attack left only minor damage, but the party has been in disarray since the coup, with many of its top leaders including Suu Kyi in detention and some of its MPs in hiding.

“We have to file a complaint to the police... We do not know who did this, but it is not good at all,” Soe Win, an NLD member in charge of the headquarters, told AFP.

The incident came on the eve of tomorrow’s Armed Forces Day, when the military will put on a show of strength with its annual parade.

Fears have been swirling that the day could become a flashpoint, as security forces have continued to crack down on activists, protesters and political allies of Suu Kyi.

Activists raised a call for nationwide protests against the junta tomorrow.

“The time has arrived again to fight the military’s oppression,” said prominent activist Ei Thinzar Maung in a Facebook post.

“On March 27, let’s come together for the people’s revolution by going out to the streets.”

The protest movement has included widespread strikes and civil disobedience by government workers, which has hamstrung the functioning of the state.

This has infuriated the authorities, who have used tear gas, rubber bullets and live rounds to break up street demonstrations, and arrested people suspected of supporting the civil disobedience campaign.

Last night in Bago region, neighbouring Yangon, police went to the home of NLD parliamentarian Kyaw Aye Win — who is currently in hiding — to arrest his son.

The detention drew the ire of protesters who gathered outside the police station to demand his release.

“When the police tried to break up the crowd of protesters, a man was shot and killed,” said a lawmaker from Phyu township, adding that the deceased was a university student who was shot in the face.

The Assistance Association for Political Prisoners (AAPP), a local monitoring group, says 320 people have been killed and nearly 3,000 arrested since the coup.

To protect themselves from violence, some activists have come up with creative ways to protest, including marching at dawn and staging “human-less” rallies, using objects or dummies in place of people.

In Mandalay, Myanmar’s second largest city, doctors’ white coats with black ribbons spray painted on them were hung at a clinic’s entrance — in apparent mourning for victims killed in the unrest.

Rows of white helmets — often worn by street protesters — were stuck on a road in Myanmar’s commercial hub Yangon with the words “We want democracy” scrawled across them.

A poster of Suu Kyi saying “Please save our leader” was stuck in the middle of the helmets display, which police had to clear in order to drive down the road, according to local media.

But some protesters continued to take to the streets — with thousands marching through central Monywa and northern Hpakant.

“The KNU finds it completely unacceptable that police and (the military), whose responsibilities are to protect and defend its own people, have killed, attacked, and threatened peaceful protesters,” said the letter, dated March 22.

It called for the release of all those detained since the coup, a halt to acts of “violence”, and for the military to “withdraw from active engagement in politics”.

“(The) KNU can meet with him only after the Tatmadaw (military) implements the following essential wishes of the people,” it said.

The group — which has been fighting the military for decades for more autonomy — is currently sheltering hundreds of anti-coup protesters who have fled to their militia-controlled territory in the country’s east.

International players have heaped condemnation — and sanctions — on the generals.

The latest came overnight from the United States and former colonial power Britain, which has targeted a huge military-owned conglomerate that gives the army chiefs access to enormous wealth. — AFP

These were the details of the news Myanmar activists call for Armed Forces Day protests for this day. We hope that we have succeeded by giving you the full details and information. To follow all our news, you can subscribe to the alerts system or to one of our different systems to provide you with all that is new.

PREV Harris says US wants to work with Guatemala to limit migration
NEXT US, China clash as Biden debuts at G7