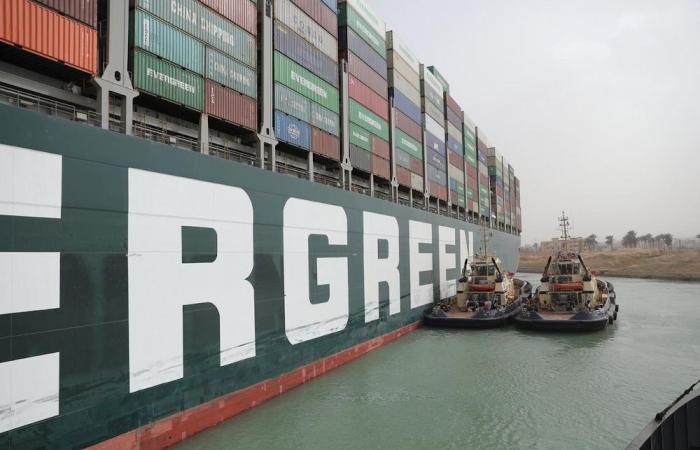 The MV Ever Given, which is longer than four football fields, has been wedged diagonally across the entire canal since Tuesday, when social media users began posting about it.

The blockage has caused huge traffic jams for dozens of ships and major delays in the delivery of oil and other products.

An official from Shoei Kisen Kaisha, the Japanese company that owns the ship, told AFP on Friday that crews were working to refloat it.

“Tugboats and dredgers are being used to crush rocks” in efforts to dislodge the boat, she told AFP, adding that the company did not have information on the exact status of damage to the vessel.

Global shipping giant Maersk and Germany’s Hapag-Lloyd have both said they are looking into re-routing around the southern tip of Africa.

“With the Suez Canal set to remain blocked for at least another day or two, shipping companies are being forced to confront the spectre of taking the far longer route around the Cape of Good Hope to get to Europe or the east coast of North America,” said Lloyd’s List, a shipping data and news company.

“The first container ship to do this is Evergreen’s Ever Greet... a sistership to Ever Given,” it said in a statement.

The Suez Canal drastically shortens travel between Asia and Europe.

The Singapore-Rotterdam route, for example, is 6,000 kilometres (3,700 miles) and up to two weeks shorter via the canal than going around Africa’s Cape of Good Hope.

Egypt’s Suez Canal Authority has said between 15,000 and 20,000 cubic metres of sand would have to be removed in order to reach a depth of 12-16 metres and refloat the ship.

“I have experience with several rescue operations of this kind and as the former chairman of the Suez Canal Authority, I know every centimetre of the canal,” said Mamish, who oversaw the recent expansion of the waterway.

However, salvage experts had warned earlier on Thursday the shutdown could last days or even weeks.

Smit Salvage has in the past worked on the wrecks of Russian nuclear submarine Kursk and Italian cruise ship Costa Concordia.

Evergreen has asked Smit Salvage and Japanese company Nippon Salvage to put in place a “more effective plan” to refloat the ship.

Smit Salvage said it was deploying a team to the site Thursday to assess what it would take to dislodge the Panama-flagged vessels.

Crude prices jumped by almost six per cent on Wednesday in response to the Suez Canal blockage.

But they tumbled yesterday, at one point completely wiping out the earlier gains.

“Oil prices corrected excess gains that accumulated from the Suez Canal blockage as the disruption’s effect is likely not one that will last too long,” said Bjornar Tonhaugen of energy consultancy Rystad. — AFP

These were the details of the news Tugs and dredgers try to free megaship blocking Suez Canal for this day. We hope that we have succeeded by giving you the full details and information. To follow all our news, you can subscribe to the alerts system or to one of our different systems to provide you with all that is new.