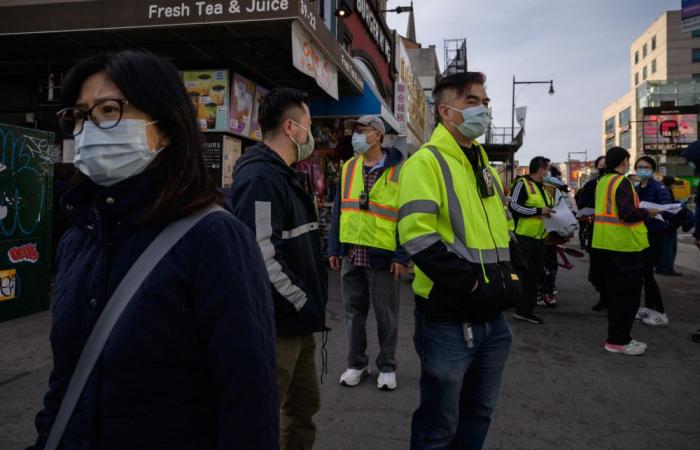 Hello and welcome to the details of Spa worker, waiter, mechanic: New Yorkers patrol after anti-Asian attacks and now with the details

“We want to show our presence so that any person who wants to commit a crime will think again,” says Richard Lee, team leader of Public Safety Patrol (PSP).

The men and women from various professions walk the streets of Chinatown in Flushing, Queens nightly in groups of around eight to reassure scared residents and help catch any would-be attackers.

The PSP, which started its walkabouts on Monday, is similar to other civil patrol teams that have mobilised in San Francisco and Oakland in response to the spike in attacks against Asian Americans since the outbreak of coronavirus.

Vice president Kenny Li quickly recruited more than 240 volunteers, including waiters, office workers and lawyers through social media and word of mouth. They coordinate their activities via a WhatsApp group and Facebook.

The vast majority have no self-defence training, just a desire to help others during their free time.

“Don’t have physical contact with anybody,” Lee, a 42-year-old retired police officer, instructs them before the three-hour patrol.

“You don’t know what kind of weapons they might have. Our job is to be the eyes and ears for the (police department).”

Each volunteer receives a stack of Chinese-language leaflets explaining their work, which they distribute on their rounds, and whistles in case they need to catch the attention of police who themselves have upped patrols in Chinese neighbourhoods.

The volunteers explain to residents that they should call 911 if they witness harassment, even if they don’t speak English, because the police will put them through to a Mandarin or Cantonese speaker.

“When I see them I feel okay about shopping and helping our community’s economy,” she tells AFP.

Most volunteers are of Asian descent but not all. German Perez, originally from Mexico, joined PSP after passing them on the street.

“Our skin may be a different colour, our languages may be different but I think we are all equal. Generally we all came to this country for the same reasons,” the 47-year-old car mechanic said in Spanish.

Anti-Asian hate crimes almost tripled from 49 to 122 last year across 16 major cities, even as overall hate crime fell seven percent, according to a recent report by the Center for the Study of Hate and Extremism.

Activists say former president Donald Trump and political allies fuelled the attacks by calling Covid-19 the “Chinese virus” and “China plague” and several of New York’s mayoral candidates have joined together to denounce the violence.

In New York City, home to more than a million people of Asian descent, this past weekend saw five incidents that police said they are investigating as possible anti-Asian hate crimes.

Hua Tong, a beauty spa worker like most of six women of Asian descent killed in Atlanta, signed up because she wanted to dispel racist stereotypes that portray Asian women as meek.

“It’s up to us to take on the responsibility of protecting ourselves. We have to speak out,” said the 42-year-old in Mandarin via an interpreter.

Stereotypes, including the “model minority myth,” have depicted people of East Asian descent as obedient and reluctant to complain.

In the wake of the attacks, they are increasingly organising, campaigning online, raising funds, holding marches and forming groups to escort elderly Asian citizens outside.

These were the details of the news Spa worker, waiter, mechanic: New Yorkers patrol after anti-Asian attacks for this day. We hope that we have succeeded by giving you the full details and information. To follow all our news, you can subscribe to the alerts system or to one of our different systems to provide you with all that is new.