Biden says he expects to run for reelection in 2024 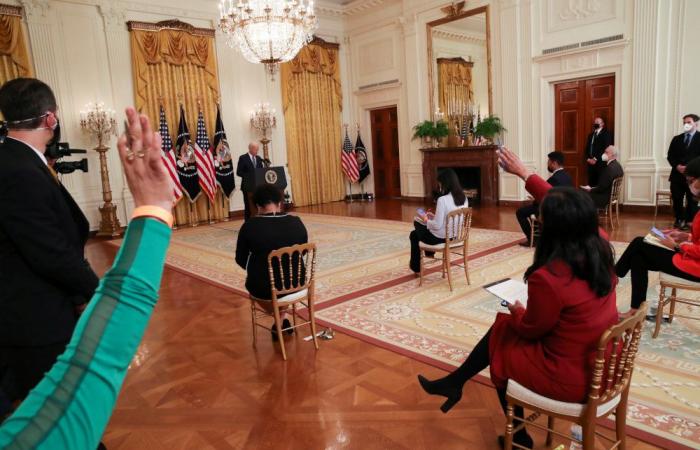 WASHINGTON, March 26 — US President Joe Biden said yesterday his “expectation” is to run for reelection in 2024, an apparent effort to douse speculation that the oldest person to assume the office will step down after a single term.

The Democratic president also attacked Republican efforts to limit voting, describing the actions in dozens of states that would make it more difficult for millions of people to cast ballots as “sick” and “un-American.”

In his first extended grilling by reporters since taking office on January 20, the 78-year-old president faced questions on topics from immigration and North Korea to whether he would support an end to the filibuster blocking tactic in the US Senate.

When asked about his political future barely two months into his presidency, though, Biden chuckled and said: “My plan is to run for reelection. That’s my expectation.”

When pressed, he added that he is “a great respecter of fate” and did not make firm plans so far in advance, but that if he does run in 2024 he “would fully expect” that Vice President Kamala Harris would be on the ticket.

Biden also shrugged off whether he believed 2024 would be a rematch with former president Donald Trump, saying he had “no idea” whether the brash and embattled businessman would run.

Biden won the November election with record turnout that helped him beat Trump by more than seven million votes.

Republican lawmakers in several states have since begun drafting a series of changes to election law that would restrict voting, in moves that would likely hurt Democrats more than Republicans.

Democrats have branded the effort as the most direct assault on American democracy since the Jim Crow era, when state and local governments passed laws that legalised racial segregation.

During a question-and-answer session, Biden swatted aside concerns that such moves to curtail voting rights could cause his party to lose control of the House and Senate in the 2022 midterm elections.

“What I’m worried about is how un-American this whole initiative is. It’s sick,” Biden said.

“Deciding that you’re going to end voting at five o’clock, when working people are just getting off work? Deciding that there will be no absentee ballots under the most rigid circumstances?” Biden said, citing examples of the proposed changes.

“The Republican voters I know find this despicable,” he said, adding he would “do everything in my power... to keep that from becoming the law.” — AFP

These were the details of the news Biden says he expects to run for reelection in 2024 for this day. We hope that we have succeeded by giving you the full details and information. To follow all our news, you can subscribe to the alerts system or to one of our different systems to provide you with all that is new.