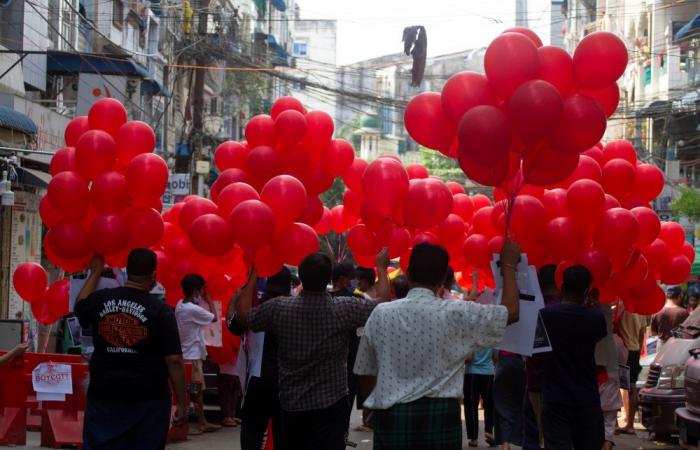 The military junta has unleashed a deadly wave of violence as it struggles to quell nationwide protests against the February 1 ouster and arrest of civilian leader Aung San Suu Kyi.

But protesters have continued calling for the military to step down, defying nighttime curfews to stage candlelight vigils for the dead, and taking to the streets early in dawn marches to avoid security forces.

In the city of Hpa-An in Karen state, protesters were preparing sandbags around 6am today (2330 GMT yesterday/7.30am Malaysian time today) when scores of soldiers and police swooped in and tried to clear the streets using stun grenades.

“After that, they shot with rubber bullets as well as real bullets, about 50 shots,” a protester told AFP by phone.

“A student got shot in the thigh by a live round and is now receiving medical treatment.”

A local resident confirmed the crackdown to AFP, saying it started before the protest had got under way.

Despite the police action, protesters in Hpa-An continued staging impromptu gatherings throughout the day, driving through the town and flashing the three-finger salute — a sign of resistance against the junta.

Early-bird protesters were also out in parts of Myanmar’s commercial hub Yangon, marching with red balloons at dawn with signs saying “Get out terrorist dictator”, according to local media.

In the country’s second largest city Mandalay, scores of health workers paraded through the streets at dawn carrying flags.

Thursday’s protests followed a day of “silent strikes” on Wednesday that left the streets of Yangon and other major centres deserted.

Overnight, a village south of Mandalay used candles to show support for a group of ousted MPs — called the Committee for Representing Pyidaungsu Hluttaw (CRPH), the Burmese word for “parliament” — working underground against the junta.

The junta has banned the group, announcing that any involvement with them is akin to “high treason”.

So far, hundreds have fled to Karen state, where the rebel Karen National Union has sheltered hundreds of anti-coup activists escaping the junta.

More than 280 people have been killed, according to the Assistance Association for Political Prisoners — a local monitoring group tracking the death toll and arrests.

But the junta puts the death toll as much lower at 164, and has branded the victims as “violent terrorist people”.

International condemnation from the UN, United States and former colonial power Britain has done little to quell the violent crackdowns.

Yesterday, the United Nations Human Rights Council expressed grave concern over human rights violations and reiterated that those responsible should be held to account.

The resolution called for Myanmar to allow UN monitoring officials unrestricted access to assess the country and for the junta to free all those arbitrarily detained — including Suu Kyi and President Win Myint.

He said Myanmar’s sovereignty had to be respected and UN meddling could bring “serious impediments on the efforts for bringing peace.” — AFP

These were the details of the news Security forces open fire on protesters in Myanmar’s east for this day. We hope that we have succeeded by giving you the full details and information. To follow all our news, you can subscribe to the alerts system or to one of our different systems to provide you with all that is new.