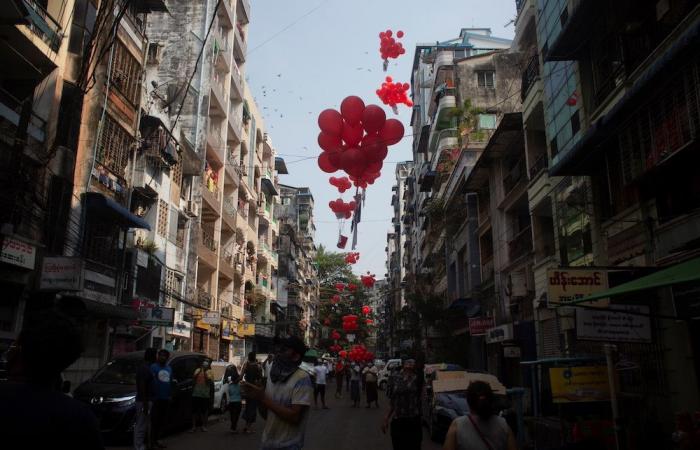 Hello and welcome to the details of Myanmar military frees hundreds of detained protesters, child victim buried and now with the details

YANGON, March 25 — Myanmar’s ruling junta yesterday freed hundreds of people arrested in its crackdown on protests against the overthrow of the elected government, while businesses in Yangon were shut and streets deserted in a strike called by anti-coup activists.

Several buses full of prisoners drove out of Yangon’s Insein Prison in the morning, lawyers and other witnesses said. There was no word from authorities on how many prisoners were freed. A spokesman for the military did not answer calls.

“All the released are the ones arrested due to the protests, as well as night arrests or those who were out to buy something,” said a member of a legal advisory group who said he saw about 15 buses leaving.

Among those freed was Thein Zaw, a journalist for The Associated Press who was arrested last month, AP reported, quoting him as saying the judge had dropped the charges.

The Assistance Association for Political Prisoners (AAPP) activist group says at least 2,000 people have been arrested in the military crackdown on protests that broke out following the coup on February 1.

It was not clear what prompted the junta to release the detainees, although it has faced repeated calls from foreign governments and organisations to do so.

In New York, the United Nations’ spokesman noted the reports of the releases but said it was still concerned about continuing arbitary arrests.

Farhan Haq also called for the release of all detainees, including the deposed President U Win Myint and Aung San Suu Kyi, the leader of the civilian government and Myanmar’s most popular political figure.

At least 275 people have been killed as the security forces employed lethal force to quell the unrest, according to the AAPP. Five more people were wounded in Mandalay, Myanmar’s second city, after nightfall yesterday, Myanmar Now media outlet reported.

It quoted residents saying security forces started shooting after people banged pots and pans in an act of opposition to the military.

Earlier in Mandalay, the funeral took place of a seven-year-old girl killed on Tuesday — the youngest known victim of the crackdown. Soldiers shot at her father in their home but hit the girl, Khin Myo Chit, who was sitting on his lap, Myanmar Now reported.

On Tuesday night, soldiers raided the family home in Chanmyathazi township, apparently to take away the child’s body, but the family had already gone into hiding with the corpse, Myanmar Now said.

“They broke down the doors and ransacked the house,” her sister May Thu was quoted as saying. “We were on the run because we were afraid they would come and take her body.”

Khin Myo Chit was buried at a Muslim cemetery with just a few close relatives present. The military has not commented on the incident.

The United Nations children’s agency Unicef said the security forces’ tactics were taking a devastating toll on children, with at least 23 killed and 11 others seriously injured since the crisis began.

The junta has faced international condemnation for staging the coup that halted Myanmar’s slow transition to democracy and for its deadly suppression of dissent.

It has tried to justify the takeover by saying a November 8 election won by Suu Kyi’s National League for Democracy (NLD) was fraudulent — an accusation the electoral commission has rejected. Military leaders have promised a new election but have not set a date and have declared a state of emergency.

Opponents of military rule have regularly called for strikes and parts of the economy have been paralysed by a civil disobedience campaign, including among civil servants.

She was due to appear at another court hearing via video conference on Wednesday, but the head of her legal team Khin Maung Zaw said it had been postponed until April 1, the second successive delay due to internet issues.

In Yangon, Myanmar’s commercial hub and former capital, a call by pro-democracy activists for a silent strike left the streets eerily quiet.

“No going out, no shops, no working. All shut down. Just for one day,” Nobel Aung, an illustrator and activist, told Reuters.

“The usual meat and vegetable vendors on the street didn’t show up,” said a resident in Mayangone district. “No car noises, only birds.”

The scale of the protests has dropped in recent days but activists have called for a big demonstration today.

In Geneva, the UN Human Rights Council reiterated that all those responsible for crimes and human rights violations throughout Myanmar, including arbitrary arrests, torture, disappearances and the use of force must be held to account.

It called on the Myanmar authorities to grant free and unrestricted access for UN monitors.

Myanmar’s deputy foreign minister Kyaw Myo Htut said in a speech that the government was trying to maintain stability by showing restraint in the face of violent demonstrations.

He criticised European Union sanctions imposed on officials linked to the coup, saying the bloc should avoid increasing tensions and complicating the situation. — Reuters

These were the details of the news Myanmar military frees hundreds of detained protesters, child victim buried for this day. We hope that we have succeeded by giving you the full details and information. To follow all our news, you can subscribe to the alerts system or to one of our different systems to provide you with all that is new.