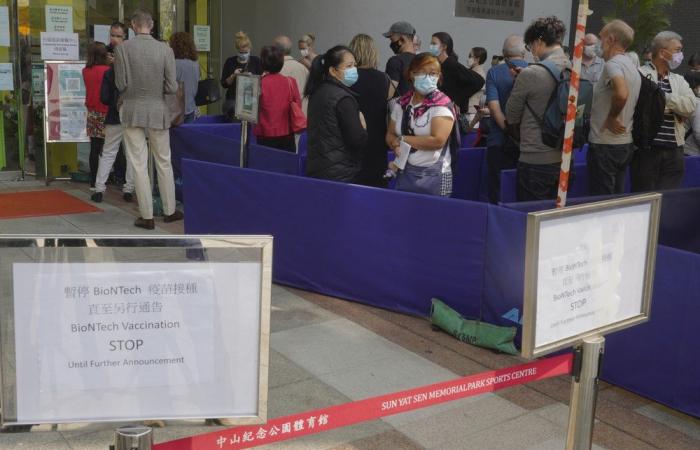 You are now following the details of the Hong Kong halts use of Pfizer vaccine, cites defective lids news and now we leave you with the details

Mohamed Nass - Cairo - HONG KONG (AP) — Hong Kong suspended use of the Pfizer vaccine Wednesday after its Chinese distributor informed the city that one batch had defective bottle lids.

The city’s government said the suspension was immediate while the matter is investigated by distributor Fosun Pharma and BioNTech, the German company which created the vaccine with American pharmaceutical firm Pfizer.

BioNTech and Fosun Pharma have not found any reason to believe the product is unsafe, according to the statement. However, vaccinations will be halted as a preventive and safety measure.

The defective lids were found on vaccines from batch number 210102. A separate batch of vaccines, 210104, will also be not be administered.

Macao also said Wednesday that residents would not receive the Pfizer vaccinations from the affected batch.

Fosun Pharma said in a filing to the Hong Kong stock exchange that it received notice from BioNTech regarding the packaging defects on Tuesday night and informed Hong Kong and Macao authorities on Wednesday to temporarily suspend the vaccines.

German expatriate Jannis Partsafas was among a group of people who received the Pfizer shot ahead of the suspension.

“I got vaccinated this morning at 8.30 a.m. before the news went public about the vaccine suspension, and heard the news when I was on my way home,” said 32-year-old Partsafas, who works in the sporting goods industry.

“I’m not very concerned about the safety, but I am worried that this may mean more people will turn down the option of getting vaccinated in Hong Kong which would impact herd immunity and the lifting of social-distancing measures,” he said.

Some residents who had appointments to receive the Pfizer shots stood in line outside a community center in the city’s Sai Ying Pun neighborhood at about 10.30 a.m. They eventually left when it became clear the vaccines would not be administered.

Image: People queue up outside a vaccination center for BioNTech in Hong Kong Wednesday, March 24, 2021. Hong Kong suspended vaccinations using Pfizer shots – known as BioNTech shots in the city – on Wednesday after they were informed by its distributor Fosun that one batch had defective bottle lids. (AP Photo/Vincent Yu)

These were the details of the news Hong Kong halts use of Pfizer vaccine, cites defective lids for this day. We hope that we have succeeded by giving you the full details and information. To follow all our news, you can subscribe to the alerts system or to one of our different systems to provide you with all that is new.