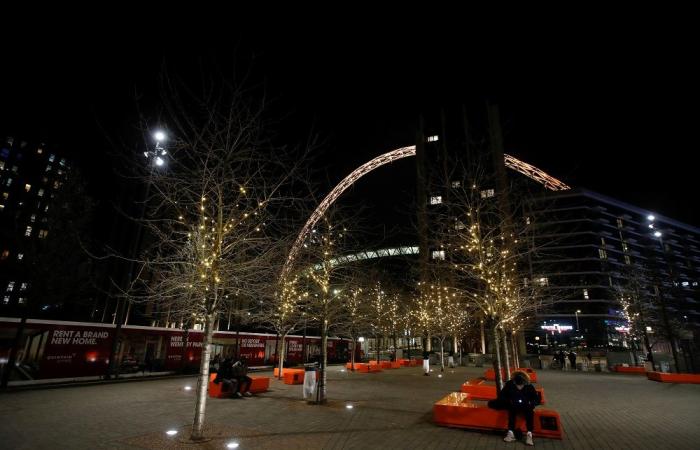 LONDON, March 24 — Britain yesterday  marked the anniversary of its first coronavirus lockdown with a minute’s silence in tribute to the more than 126,000 people who have died — one of the world’s worst tolls.

The “National Day of Reflection” saw the silence observed in parliament and across the UK at noon (1200 GMT), followed by bells ringing to mourn the dead and honour frontline health workers.

Members of the public stood on their doorsteps at 8:00 pm with lit phones, candles or torches to signify a “beacon of remembrance”. A candle burned in a glass lantern on the doorstep of 10 Downing Street, residence of Prime Minister Boris Johnson.

Landmarks such as Canary Wharf in London, Liverpool’s Liver Building and Blackpool Tower were lit up in yellow, and the facade of Lichfield Cathedral in central England was illuminated with the words “Reflect Support Hope.”

Queen Elizabeth II, forced to spend much of the year out of the public eye, and her eldest son and heir Prince Charles led the tributes.

The 94-year-old monarch called for reflection on the grief felt by families, and paid tribute to “the immeasurable service of those who have supported us all over the last year”.

The prime minister ordered a lockdown on March 23 last year, shutting schools and non-essential shops and services, and banning gatherings of more than two people.

He warned then that “many lives sadly will be lost” — though the death toll today of 126,284 stands far beyond any of the worst predictions of British scientists or politicians a year ago.

A YouGov survey conducted last week found that one in six people in Britain have lost a family member or close friend to Covid-19.

‘Fighting in the dark’

Alana Greig, senior charge nurse at the Glasgow Royal Infirmary in Scotland, was one of the many medics forced to wage a desperate battle to save lives during the peaks of the pandemic, last spring and this winter.

“It’s really been quite sad at times because young and old have passed away unfortunately,” she told AFP.

Throughout the crisis, the country has rallied round the state-run National Health Service (NHS).

Yesterday, a Banksy painting sold at auction for £16.75 million (RM95 million) — a record for the elusive street artist — with proceeds going to the NHS.

Initially, the lockdown was meant to last three weeks. A year on, Britain is in its third phase of restrictions, but is gradually loosening them thanks to a mass vaccination campaign.

However, Johnson warned that Britain needed to stay on its guard as a third wave now sweeps across Europe, as he called for reflection on the losses of the past year.

The experience was “like fighting in the dark against a callous and invisible enemy, until science allowed us to turn the lights on and gain the upper hand”, he told a news conference.

The inoculation campaign has been widely lauded, but Johnson’s many critics accuse the government of repeatedly doing too little, too late to combat the pandemic.

The country will establish a memorial to the Covid dead “at the right moment”, the prime minister said, while defending his policy responses last year “as very, very hard decisions, and there are no good outcomes either way”.

Johnson himself required life-saving treatment in intensive care after catching the virus shortly after announcing the first lockdown.

However, his government is facing fierce criticism for permitting a pay rise of only 1.0 per cent this year for most NHS staff, which translates into a pay cut after inflation.

And it is resisting calls to hold an immediate public inquiry into why the pandemic struck Britain so hard, while political rows further afield have also clouded the vaccination drive.

Supply constraints in India affecting UK-based pharmaceutical giant AstraZeneca mean the next phase of inoculations for people aged under 50 will have to be paused next month, the government has warned.

European officials meanwhile are furious that AstraZeneca has up to now been able to deliver its UK contract in full while falling short on its supplies to the EU, and are threatening to block more exports.

“We in this country don’t believe in blockades of any kind of vaccines or vaccine material,” Johnson told yesterday's news conference.

“It’s not something this country would dream of engaging in and I’m encouraged by some of the things I’ve heard in the continent in the same sense.” — AFP

These were the details of the news Sombre UK marks one year since first virus lockdown for this day. We hope that we have succeeded by giving you the full details and information. To follow all our news, you can subscribe to the alerts system or to one of our different systems to provide you with all that is new.