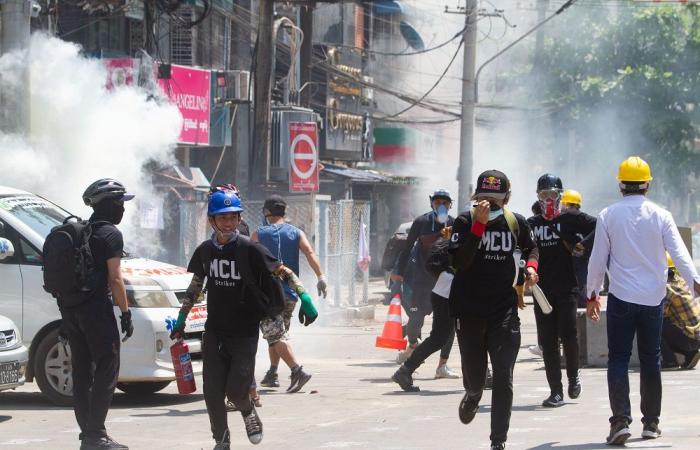 Hello and welcome to the details of Myanmar junta defends crackdown, vows to stop 'anarchy' and now with the details

YANGON, March 24 — Myanmar’s junta yesterday defended its seven-week crackdown that has left more than 260 democracy protesters dead, insisting it would not tolerate “anarchy”.

The junta has unleashed deadly violence as it struggles to quell nationwide protests against the February 1 ousting of civilian leader Aung San Suu Kyi.

“I am sad because these violent terrorist people who died are our nationals,” he said.

The streets of towns and cities across the country have seen chaotic scenes for weeks as security forces clash with protesters demanding the restoration of democracy and the release of Suu Kyi.

The authorities have used tear gas, rubber bullets and live rounds to disperse protests, prompting a senior UN rights expert to warn they may be committing “crimes against humanity”.

Among those killed was a grade-eight student in Mandalay who was shot when he went to collect water from the front of his house Monday, the Assistance Association for Political Prisoners (AAPP) monitoring group said yesterday.

Save the Children, who reported the boy’s age as 14, said it was “horrified that children continue to be among the targets of these fatal attacks”.

But despite widespread international condemnation, Zaw Min Tun defended the response, saying that the security forces were dealing with “insurgents holding weapons” and five police and four soldiers had been killed.

“We have to crack down on the anarchy. Which countries in the world accept anarchy?” he said.

Despite the bloodshed, protesters took to the streets again yesterday, staging dawn demonstrations in parts of the commercial capital Yangon.

As well as breaking up protests, the military has sought to stem the flow of news about the crackdown, banning several local media outlets and arresting dozens of journalists.

Mobile data networks are suspended and Zaw Min Tun said there were presently no plans to restore them.

Suu Kyi, not seen in public since being detained on February 1, is facing several criminal charges as well as allegations of accepting illegal payments of gold and cash.

Sean Turnell, an Australian adviser to the 75-year-old Nobel laureate, is being investigated under immigration and state secrets laws, the junta spokesman announced yesterday.

Turnell, an economist and university professor, was the first foreign national arrested following the coup.

International pressure is building on the regime, with the European Union on Monday imposing sanctions on junta chief General Min Aung Hlaing and 10 other senior officials.

The bloc said that as commander-in-chief, Min Aung Hlaing was “directly responsible” for “serious human rights violations” carried out during the crackdown.

And Washington — which has already blacklisted the top junta leaders — sanctioned Myanmar’s police chief and an army special operations commander, saying they were responsible for using lethal force against demonstrators.

The US Treasury said that since Than Hlaing was made police chief and deputy home affairs minister on February 2, the police had engaged in “brutal acts of violence” against protesters.

Army commander Aung Soe was responsible for sending in troops to confront protesters using battlefield weapons and tactics, “demonstrating that lethal force is being used in a planned, premeditated and coordinated manner against the anti-coup protests,” the Treasury said.

But sanctions and the chorus of global condemnation have so far had little impact on the generals, who have shunned calls for restraint.

There has been an exodus from the city — the former capital — with residents seeking safety elsewhere in the country, and warnings from embassies to foreign nationals.

The Australian embassy yesterday warned its citizens to prepare to “shelter in place” with essential supplies, while Myanmar’s former colonial ruler Britain has already advised its nationals to get out.

Neighbouring Thailand is bracing for a possible influx of tens of thousands of refugees if the situation worsens. — AFP

These were the details of the news Myanmar junta defends crackdown, vows to stop 'anarchy' for this day. We hope that we have succeeded by giving you the full details and information. To follow all our news, you can subscribe to the alerts system or to one of our different systems to provide you with all that is new.