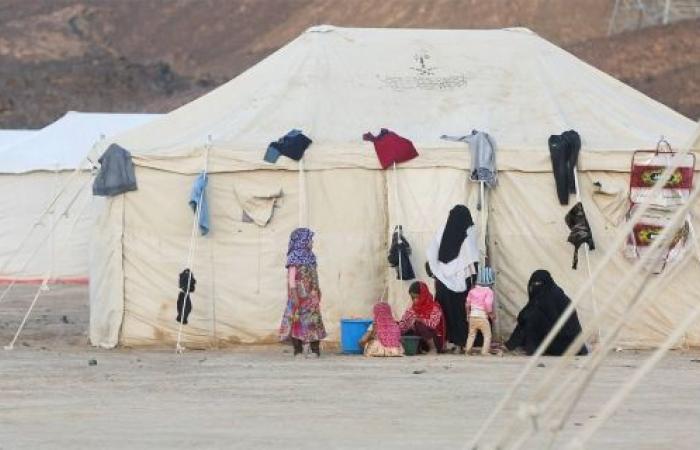 The Houthi militia must stop unlawful attacks and allow unimpeded humanitarian access to civilians trapped by the fighting, the HRW noted.

Citing the Yemeni foreign ministry’s statement, HRW said that the Houthis on Feb. 27 had fired 10 ballistic missiles, which cannot discriminate between civilians and military targets toward Ma'rib city since the beginning of the month.

“Houthi forces have committed serious abuses and shown a shocking disregard for the well-being and safety of civilians throughout the conflict,” said Afrah Nasser, Yemen researcher at Human Rights Watch. “The Houthis’ indiscriminate artillery and rocket attacks toward populated areas in Ma'rib have put displaced persons and local communities at severe risk.”

Citing the accounts of aid workers, HRW said that the Houthi artillery and heavy direct-fire weapons forces hit several camps for displaced people during February, including Al-Zour camp, Lafj Al-Melh camp, Thanat Al-Sawabin, and Thanat Al-Haial camps, in northern and western Ma'rib governorate. The attacks on the camps, which held hundreds of families, provoked a new wave of flight toward Ma'rib city.

“Fleeing civilians shared terrifying stories about the heavy shelling they escaped from, very often on foot, to reach other camps in Ma'rib, one aid worker was quoted as saying.

Since the beginning of 2021, at least 14,000 civilians fled northern districts of Ma'rib governorate for Ma'rib city and the governorate’s southern districts, HRW said citing a report from the Executive Unit for the Management of Displaced Persons Camps. The report said that there are currently displaced people in 143 camps concentrated in Ma'rib’s Al-Wadi district and Ma'rib city. Some of these people have been displaced up to three times by different rounds of fighting.

These were the details of the news HRW condemns indiscriminate Houthi fire on civilian areas in Yemen’s Ma’rib for this day. We hope that we have succeeded by giving you the full details and information. To follow all our news, you can subscribe to the alerts system or to one of our different systems to provide you with all that is new.