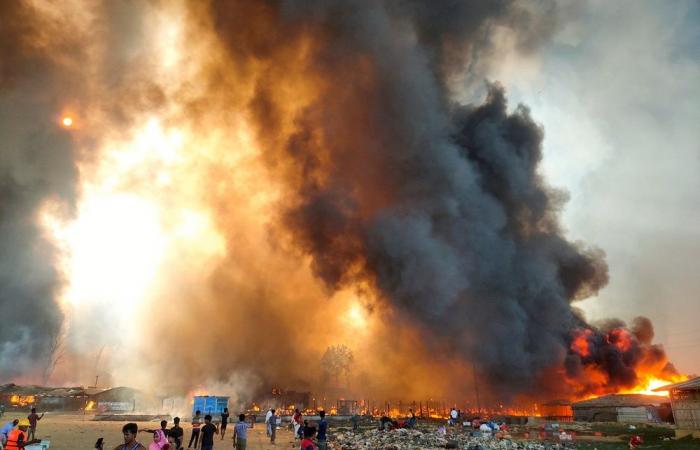 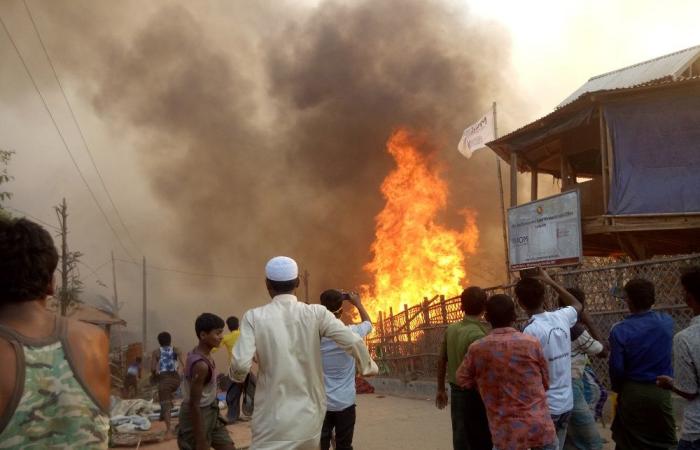 COX’S BAZAR, March 23 — A huge blaze that ripped through a sprawling Rohingya refugee camp in Bangladesh has forced at least 50,000 people to flee and left seven people feared dead, officials and aid workers said, in the biggest fire to hit the shanty settlement to date.

Nearly one million of the persecuted Muslim minority from Myanmar — many of whom fled a military crackdown in their homeland in 2017 — live in cramped and squalid conditions at the camps in the southeastern Cox’s Bazar district.

It is the third fire to hit the camps in four days.

Officials said the latest blaze appeared to have started yesterday in one of the 34 camps — which span about 8,000 acres (3,237 hectares) of land — before spreading to three other camps, with refugees fleeing the shanties with whatever belongings they could carry.

Thick columns of smoke could be seen billowing from blazing shanties in video shared on social media, as hundreds of firefighters and aid workers battled the flames and pulled refugees to safety.

Firefighters brought the blaze under control around midnight, with the Refugees International saying at least 50,000 people fled their shanties as the blaze reduced thousands of shelters made of tarp and bamboo to ashes.

The government’s refugee office and police, however, had yet to confirm any deaths.

“It was the biggest fire since the influx of Rohingya in August 2017. Some 1,500-2,000 shanties were completely gutted,” the government’s deputy chief refugee commissioner Shamsud Douza, told AFP.

Douza said food had been delivered to the displaced refugees and aid workers were trying provide all necessary humanitarian support.

Gazi Salahuddin, a police inspector, said the “fire displaced about 50,000 people who took refuge in the homes of their relatives in other camps”.

‘People ran for their lives’

Salahuddin said the fire was initially confined to a narrow strip, but it grew and raced to other camps after gas cylinders used for cooking exploded.

Mohammad Yasin, a Rohingya helping with the firefighting, told AFP the blaze raged for more than 10 hours and was the worst he had seen since 2017.

“People ran for their lives as it spread fast. Many were injured and I saw at least four bodies,” said Aminul Haq, another refugee.

A volunteer for the Save the Children organisation, Tayeba Begum, said “children were running, crying for their families”.

The Refugees International quoted one Rohingya as saying that the fire had revived traumatic memories of the persecution the Rohingya experienced in Myanmar in 2017.

“Many children are missing, and some were unable to flee because of barbed-wire set up in the camps,” it said in a statement.

“This tragedy is an awful reminder of the vulnerable position of Rohingya refugees who are caught between increasingly precarious conditions in Bangladesh and the reality of a homeland now ruled by the military responsible for the genocide that forced them to flee,” it added.

It was the third blaze to hit the camps in four days, fire brigade official Sikder, who only goes by one name, told AFP.

Two separate fires at the camps on Friday destroyed scores of shanties, officials said then.

Sikder said the cause of the fires was not yet known.

Amnesty International’s South Asia campaigner, Saad Hammadi, tweeted that the “frequency of fire in the camps is too coincidental, especially when outcomes of previous investigations into the incidents are not known and they keep repeating”.

The government has meanwhile been pushing for the refugees to be relocated to a remote island in the Bay of Bengal, saying the camps were too crowded.

So far, 13,000 Rohingya have been moved to the flood-prone island, which critics say is also in the path of deadly cyclones. — AFP

These were the details of the news Tens of thousands flee huge blaze at Rohingya camp in Bangladesh for this day. We hope that we have succeeded by giving you the full details and information. To follow all our news, you can subscribe to the alerts system or to one of our different systems to provide you with all that is new.