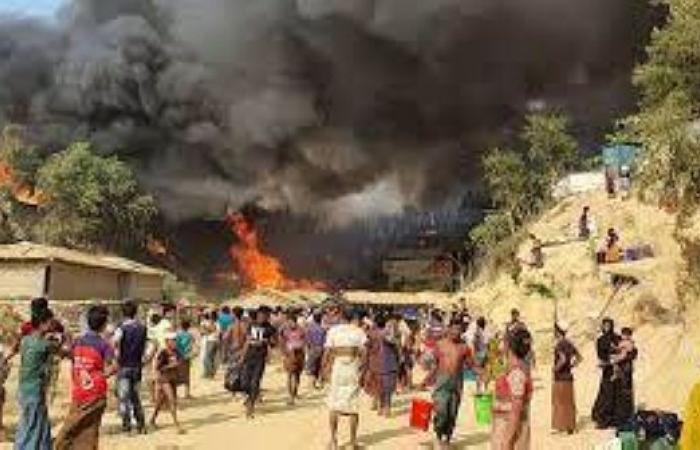 Hind Al Soulia - Riyadh - DHAKA — A fire has swept through a sprawling Rohingya refugee camp in Cox's Bazar, Bangladesh, destroying shelters and endangering the lives of tens of thousands of refugees, the UN refugee agency UNHCR reported on Monday.

Fire services, Bangladesh's Refugee Relief and Repatriation Commissioner, and rescue and response teams remained at the scene on Monday evening, where they continued to try to control the fire and prevent its further spread, the UNHCR said late Monday afternoon local time.

"I am deeply concerned by the impact of a terrible fire today in Cox's Bazar, Bangladesh," Vitorino said, adding that "IOM teams and partners are working together to respond to the crisis and ensure the safety and well-being of all."

Images from witnesses showed a massive blaze consuming huts and scores of refugees fleeing on foot. The cause of the fire has not yet been determined.

"The fire spread so quickly that before we understood what happened, it caught our house," said Tayeba Begum, a Save the Children volunteer who witnessed the fire. "People were screaming and running here and there. Children were also running scattered, crying for their family. It is the most horrific incident I have witnessed recently."

Monday's blaze marks the largest of multiple fires that have plagued the camp this year alone, Onno Van Manen, the country director for Save the Children in Bangladesh said.

"It is another devastating blow to the Rohingya refugees who live here. Just a couple of days ago we lost one of our health facilities in another fire. The risks of fires in these extremely densely populated and confined areas are enormous," Van Manen said. — Courtesy CNN

These were the details of the news Massive fire destroys homes of thousands in Bangladesh Rohingya refugee camps for this day. We hope that we have succeeded by giving you the full details and information. To follow all our news, you can subscribe to the alerts system or to one of our different systems to provide you with all that is new.