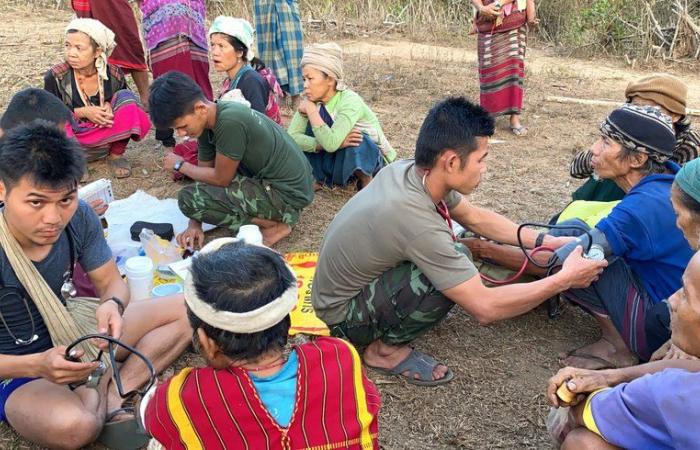 You are now following the details of the In Myanmar’s hinterland, army uproots ethnic Karen villagers news and now we leave you with the details

This largely unseen repression continues even now. In the country’s remote southeast, an army offensive has driven as many as 8,000 ethnic Karen people to flee their homes in what aid groups say is the worst upheaval there for nearly 10 years.

They’re now living in the jungle, with fears growing for their health and security, and no prospect of an early return.

This crisis in the borderlands has been overshadowed by the deadly crackdown on the mass movement protesting the military’s takeover of power from the elected government of Aung San Suu Kyi.

But it also is a reminder of the brutal force Myanmar’s army has long used against civilians, and in particular the country’s ethnic minorities.

The Karen National Union, the leading political body for the Karen, for now is shouldering all of the displaced people’s basic needs for food, shelter and security.

But in the long run, that will be a challenge for the group, said Padoh Saw Taw Nee, head of the KNU’s foreign affairs department, in an email interview.

“Therefore the international community should reach out with humanitarian assistance to these people who are in need as soon as possible,” he said.

The Karen are among more than a dozen ethnic groups that have been seeking greater autonomy from the central government since Myanmar, then known as Burma, became independent from Britain in 1948.

At times the ethnic groups’ guerrilla forces have engaged in full-on armed conflict with the government; in recent years, many have reached an uneasy cease-fire. Their talks with Suu Kyi’s government failed to reach a comprehensive political resolution before it was deposed by the coup.

The army, meanwhile, has aggressively expanded its reach in at least two districts in Karen state since 2017, building new bases and roads to try to dominate an area that doesn’t want it there.

In the last few months, troop numbers and activity have scaled up dramatically, according to relief organizations active there.

The Karen’s own armed force, the Karen National Liberation Army, has fought back. In retaliation, the army has increased its attacks and shelled surrounding villages.

Relief agencies say the 8,000 or so people who abandoned their homes for the privations of the jungle are safe and are adapting as well as they can, building bamboo shelters and holding school classes in the open.

But no one knows when they can return or whether their villages will still be standing when they do. Meanwhile, the fields where their crops would grow are untended, threatening food supplies later in the year.

A humanitarian group, the Free Burma Rangers, has been bringing in aid since the attacks began and documenting the Karens’ plight. The group was formed in the late 1990s during intense attacks that displaced more than 100,000 Karen people.

Its founder and director, Dave Eubank, is a former member of the U.S. Special Forces who combines evangelical activities with well-disciplined forays by Karen volunteers to deliver medical aid to villagers.

In a recent interview with The Associated Press via satellite phone from the affected area, Eubank spoke of what the displaced Karen desperately need.

He said that stopping attacks by Myanmar troops — “security and survival” — is the top priority.

Food comes next. “As they get displaced they’ve got to eat,” he said. “They can’t go back and start their crops. They can’t prepare for the next fields, they can’t look after the animals,” he said.

In 2012, the Karen National Union signed a cease-fire with the government, which it hoped would end decades of military aggression. But Myanmar’s army has repeatedly breached it. This is the worst breach yet, aid groups say.

Hsa Moo from the Karen Environmental and Social Action Network has just returned from the affected area. A former refugee herself, she says it’s heartbreaking.

“This is not a good time for us. This is after the cease-fire; but we thought the cease-fire can help them, but actually not. So they have to flee and they have to hide, so it is very difficult for them to hide in the jungle,” she said.

The Karen long ago learned the brutal nature of the military, independent analyst David Mathieson told The Associated Press.

“What’s interesting about Karen state is a lot of people there see the fighting and now the coup and the civil disobedience movement as intricately linked,” he said. “It’s like ‘Look, we’ve been telling you for years that the enemy is the military.’”

“For all those people who wanted to accommodate the military, when you live in these areas of ongoing armed conflict you know exactly who you are dealing with and you know that you can’t trust them,” he explained.

The lesson he takes from the army’s actions in the cities and in the hinterlands: “This is the military trying to subjugate the entire country once again.”

Image: In this photo released by the Free Burma Rangers, members of the humanitarian group Free Burma Rangers carry out medical checkups on villagers in the northern Karen State, Myanmar Feb. 25, 2021. The group has been bringing aid to some of the 8,000 ethnic people forced to flee their homes by an ongoing local offensive by the Myanmar army aimed at increasing the military’s presence in the remote region. (Free Burma Rangers via AP)

These were the details of the news In Myanmar’s hinterland, army uproots ethnic Karen villagers for this day. We hope that we have succeeded by giving you the full details and information. To follow all our news, you can subscribe to the alerts system or to one of our different systems to provide you with all that is new.