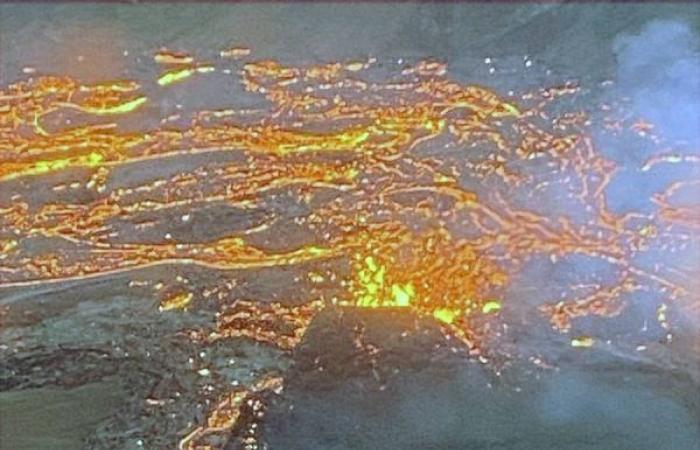 "A volcanic eruption started this evening at 20:45 near Fagradalsfjall in Geldingadalur," IMO said in a tweet. "The eruption is considered small at this stage and the eruptive fissure is app. 500 m long. The magma area is app. 1km2. Lava fountains are small."

A long-dormant volcano in southwest Iceland erupted on Friday some 40 kilometers (25 miles) from the capital Reykjavik, the Icelandic Meteorological Office said.

Local media reported that both inbound and outgoing air traffic had been halted from Keflavik International Airport, the country's largest, servicing the capital.

Iceland's Department of Civil Protection and Emergency Management is advising people within several miles of the volcano to close their windows and stay indoors to avoid the effects of volcanic gas in the air.

"Volcanic gas pollution is expected to extend as far as Þorlákshöfn and to continue into the night. People are asked close windows and stay indoors.

“The status and amount of SO2 emissions from the eruption are being assessed," the agency tweeted late Friday.

People were urged to avoid the Reykjanesbraut highway on the southwest Reykjanes Peninsula, which connects Greater Reykjavík to Iceland's Keflavík International Airport.

"First responders need to be able to drive freely to assess the situation. Scientists are working on assessing the eruption," the authority tweeted.

The eruption comes after weeks of increased seismic activity on the peninsula, with some 400 earthquakes detected in the region on Thursday morning alone, according to the IMO.

"This is somewhat less seismic activity in comparison to previous mornings where the numbers have been around 1,000 earthquakes," the IMO added in a tweet on Thursday.

The Meteorological Office reported the fissure caused by the eruption near the Fagradals Mountain was around 500 meters (roughly 1,640 feet) long, declaring "flight color code is red but very little turbulence is seen on seismometers."

The lava appeared to "flow slowly," the Meteorological Office added as they shared an aerial view video of the eruption on Facebook. Authorities urged people to avoid the eruption site.

"We ask people to stay calm and not under any circumstances go close to the eruption site or on Reykjanesbraut. First responders need to be able to drive freely to assess the situation. Scientists are working on assessing the eruption," police said.

The Icelandic Police Department said it expected volcanic gas pollution to extend as far as the southern coast of the Ölfus municipality, where at least 2,000 people live, almost 50 kilometers away from Reykjavik.

Iceland's Southern Peninsula and its Krysuvik volcanic system, a largely uninhabited zone that includes Mount Keilir, had recorded at least 40,000 tremors as hefty as magnitude 5.7 since February 24.

Experts had said prior to the eruption that they expected a lava-based outpouring, nothing reminiscent of the 2010 Eyjafjallajökull volcano, which generated a massive ash cloud, notoriously disrupting around 900,000 flights across Europe over a period of several weeks.

The region is known to experience effusive eruptions, where lava flows out of the ground, rather than explosive ones, in which ash clouds burst high into the sky. The latter are far more problematic for air travel, with the ash capable of damaging jet engines and affecting visibility.

The Krysuvik volcanic system has been inactive for almost 900 years, according to the Meteorological Office. The southern Reykjanes peninsula last witnessed an eruption 781 years ago. — Agencies

These were the details of the news Iceland reports volcanic eruption near capital Reykjavík for this day. We hope that we have succeeded by giving you the full details and information. To follow all our news, you can subscribe to the alerts system or to one of our different systems to provide you with all that is new.