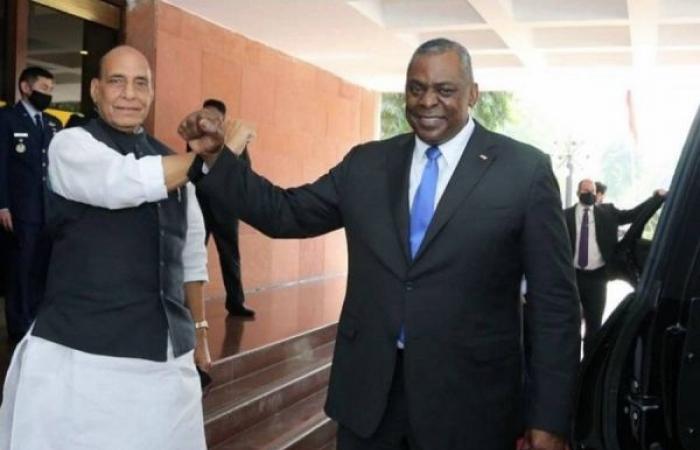 We show you our most important and recent visitors news details India, US agree to enhance defense, security ties in the following article

India is the third destination of Austin's three-nation first overseas tour, and the visit is seen as a reflection of the Joe Biden administration's strong commitment to its relations with its close allies and partners in the region.

"Our discussions today focused on our wide ranging defense cooperation and expanding military-to-military engagement across services, information sharing, cooperation in emerging sectors of defense, and mutual logistics support," Singh said in a statement after talks with his US counterpart.

US Secretary of Defense Austin, who arrived in India on a three-day visit, was quoted as having underlined Washington's "continued commitment" towards enhancing bilateral defense relations with New Delhi.

He is the first American official to visit India since the Joe Biden administration took office early this year. During the talks, both sides reviewed all segments of bilateral and multilateral exercises and agreed to pursue enhanced cooperation with the US Indo-Pacific Command, Central Command and Africa Command.

"We both agreed that there are opportunities for collaboration in defense industry. The recent Leaders' Summit of India, USA, Japan and Australia, under the Quad framework, emphasized our resolve to maintain a free, open and inclusive Indo-Pacific region," Singh was quoted as saying.

They also underlined the need for enhanced capacity building to face certain non-traditional challenges such including oil spills and environment disasters, drug trafficking and illegal fishing.

"I am happy to inform that I had a comprehensive and fruitful discussion with Secretary Austin and his delegation. We are keen to work together to realize the full potential of the India-US comprehensive global strategic partnership," Singh said in his statement to the media.

Referring to Indo-US foundational agreements on defense ties, he said both sides discussed steps to be taken to realize the full potential of pacts such as LEMOA (Logistics Exchange Memorandum of Agreement), COMCASA (Communications Compatibility and Security Agreement) and BECA (Basic Exchange and Cooperation Agreement) for mutual benefit.

Singh also said the recent summit of leaders of India, the US, Japan and Australia under the Quad framework emphasized the resolve to maintain a free, open and inclusive Indo-Pacific region.

In his comments, Secretary Austin reaffirmed the commitment by the US to a comprehensive and forward-looking defense partnership with India as a "central pillar" of its approach to the region.

He also described the India-US relationship as a "stronghold" of a free and open Indo-Pacific region. "Singh and I had a very productive discussion...I wanted to convey the Biden-Harris administration's message about our strong commitment to our allies and partners," he said.

On Saturday morning, Austin visited the National War Memorial and paid tributes to India's fallen heroes. Before the talks, he was given a guard of honor at the Vigyan Bhavan complex.

The US defense secretary called on Prime Minister Narendra Modi and held talks with National Security Advisor Ajit Doval hours after his arrival in Delhi on Friday.

In his meeting with Modi, he conveyed the Biden administration's strong desire to further deepen strategic ties with India to address the pressing challenges facing the Indo-Pacific.

Almost all key issues of mutual concerns, including China's aggressive behavior in the region, are learned to have figured in the deliberations between Austin and Doval.

"Thrilled to be here in India. The breadth of cooperation between our two nations reflects the significance of our major defense partnership, as we work together to address the most pressing challenges facing the Indo-Pacific region," Austin tweeted on Friday.

People familiar with the US official's visit said earlier that India's plan to procure around 30 multi-mission armed Predator drones from the US for the three services at an estimated cost of over $3 billion is expected to figure in Austin-Singh talks.

The Indo-US defense ties have been on an upswing in the last few years. In June 2016, the US had designated India a "Major Defense Partner".

The two countries have also inked key defense and security pacts over the past few years, including the Logistics Exchange Memorandum of Agreement (LEMOA) in 2016 that allows their militaries use of each other's bases for repair and replenishment of supplies as well as provides for deeper cooperation.

The two sides have also signed COMCASA (Communications Compatibility and Security Agreement) in 2018 that provides for interoperability between the two militaries and provides for sale of high-end technology from the US to India.

In October last year, India and the US sealed the BECA (Basic Exchange and Cooperation Agreement) agreement to further boost bilateral defense ties. The pact provides for sharing of high-end military technology, logistics and geospatial maps between the two countries. — Agencies

These were the details of the news India, US agree to enhance defense, security ties for this day. We hope that we have succeeded by giving you the full details and information. To follow all our news, you can subscribe to the alerts system or to one of our different systems to provide you with all that is new.