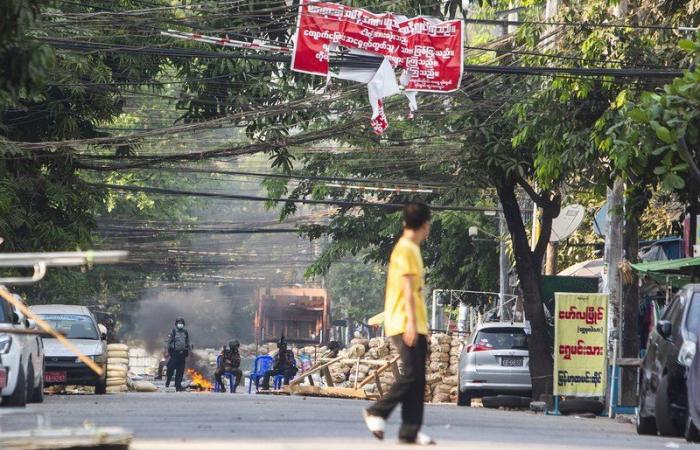 You are now following the details of the UN official: Myanmar people want UN sanctions, peacekeepers news and now we leave you with the details

Mohamed Nass - Cairo - UNITED NATIONS (AP) — The people of Myanmar have huge expectations from the United Nations and the international community following the Feb. 1 coup, with many calling for sanctions and some urging the UN to send peacekeepers to stop the killings of peaceful protesters seeking a return to democracy, the top UN official in the country said Friday.

Guterres echoed that message again on Friday, saying “a firm, unified international response is urgently needed” to stop the violence by security forces and return Myanmar to the path of democracy, UN spokesman Stephane Dujarric said.

“Many people will have seen people carrying placards saying, ‘how many more bodies?’” Kirkwood said. “People are really looking for concerted international action in terms of sanctions. Frankly, some people here want to see peacekeepers.”

The coup reversed years of slow progress toward democracy in Myanmar, which for five decades had languished under strict military rule that led to international isolation and sanctions. As the generals loosened their grip, culminating in Aung San Suu Kyi’s rise to power after 2015 elections, the international community responded by lifting most sanctions and pouring investment into the country.

The Security Council adopted a presidential statement — one step below a resolution — on March 10 calling for a reversal of the coup, strongly condemning the violence against peaceful protesters and calling for “utmost restraint” by the military. It stressed the need to uphold “democratic institutions and processes” and called for the immediate release of detained government leaders including Suu Kyi and President Win Myint.

The statement is weaker than the initial draft circulated by the United Kingdom, which would have condemned the coup and threatened “possible measures under the UN Charter” — UN language for sanctions — “should the situation deteriorate further.”

Diplomats said council members China and India, both neighbors of Myanmar, as well as Russia and Vietnam, which along with Myanmar is a member of the Association of Southeast Asian Nations, objected to provisions in the stronger earlier drafts of the statement.

Getting Security Council approval for UN sanctions or peacekeepers will be an uphill struggle. That’s because it will require support or an abstention from China, a veto-wielding council member that calls itself a friend of Myanmar and has a policy opposing sanctions.

The UN has also looked to ASEAN as the regional power to take the lead in trying to end the crisis.

Indonesian President Joko Widodo, the leader of Southeast Asia’s largest economy, urged an immediate halt to the violence on Friday and called for a summit of ASEAN leaders on the coup.

Without it, the death toll keeps mounting as protesters refuse to accept the coup.

Kirkwood said at least 211 people have been killed in the seven weeks since the military takeover, including at least 15 children, some as young as 14. He emphasized that many were killed by sniper bullets to the head.

At least 2,400 people have been arrested because of their suspected participation in demonstrations, he said. “The vast majority of these people are held incommunicado still, and there are increasing reports of sexually based violence against them.”

“Two million people live in areas under martial law in the industrial suburbs,” Kirkwood said. “Just in the last few days, tens of thousands of people have fled those areas under martial law and there are desperate interviews of families carrying everything they can as they return to villages they left a decade ago to come to the city for a better life.”

In addition, Kirkwood said, “the government health system has practically collapsed, the security forces have occupied 36 hospitals around the country, and in some cases patients have been evicted from those hospitals.”

There’s also a banking crisis that has caused major disruptions to supply chains and logistics, Kirkwood said, and in the last month food prices have increased about 20% in some places, the result mainly of growing fuel shortages and transportation difficulties.

“What we may be looking at is a slow burning food crisis,” he said. “What we fear is that the situation will really deteriorate as transportation links and people’s access to agricultural inputs decreases, people are displaced from their normal homes and farms.”

“We haven’t seen a significant increase in the people in need of food yet, but this is a huge concern for us over time,” Kirkwood said.

He said the UN has better access to Rakhine state, where some 600,000 Rohingya Muslims live in difficult conditions after more than 700,000 Rohingya fled a military crackdown in 2017 to neighboring Bangladesh.

“The protests and the violence haven’t really spread in Rakhine as they have in the rest of the country,” Kirkwood said. “And so in terms of humanitarian issues it’s a small bright spot in an otherwise quite dark picture.”

These were the details of the news UN official: Myanmar people want UN sanctions, peacekeepers for this day. We hope that we have succeeded by giving you the full details and information. To follow all our news, you can subscribe to the alerts system or to one of our different systems to provide you with all that is new.