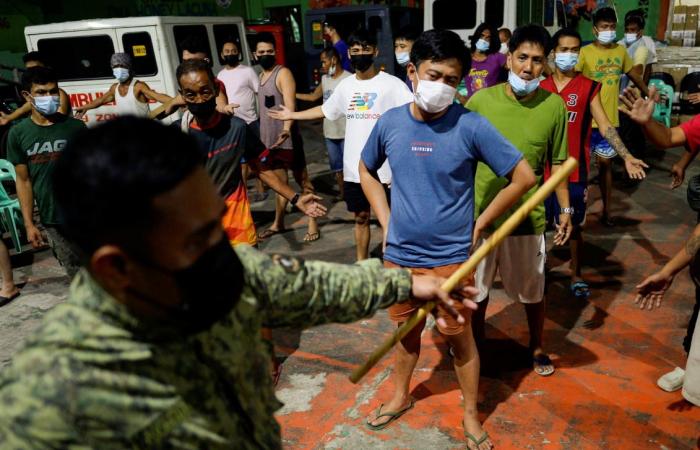 Thank you for reading the news about Philippines reports record 7,999 new COVID-19 infections and now with the details

Jeddah - Yasmine El Tohamy - ATLANTA, USA: US President Joe Biden on Friday denounced the upsurge of violence against Asian-Americans, telling a community plunged into grief after this week’s Atlanta murders that the nation must not be complicit in the face of racism and xenophobia.
After meeting with leaders of Georgia’s Asian-American community, Biden delivered a brief speech at Atlanta’s Emory University, where he branded hate and racism “the ugly poison that’s long haunted our nation.”
Such bigotry and violence has been “often met with silence” in the United States, he said.
“But that has to change because our silence is complicity. We cannot be complicit,” Biden stressed.
“We have to speak out, we have to act,” he added, as he called on Americans to “combat this resurgence of xenophobia.”
And he leveled a rebuke of previous president Donald Trump without mentioning his name, saying: “Words have consequences. It’s the coronavirus, full stop.”
Trump faced severe blowback last year for repeatedly calling Covid-19 — which has now killed 540,000 people in the United States — the “China virus” after the country where it was first detected.
Biden noted that attacks on Asian Americans and Pacific Islanders have been “skyrocketing,” a trend confirmed by the group Stop AAPI Hate which says nearly 3,800 cases have been reported since last year, including verbal and physical assaults, discrimination and civil rights abuses.
Biden’s pre-scheduled trip to the southern metropolis was originally intended to focus on his Covid-19 battle plan.
The president began with a visit to the Centers for Disease Control and Prevention, where he received a briefing, and he also marked a key milestone in the US having administered 100 million vaccine doses.
“We did it in about 60 days,” Biden said. “We’re not stopping now.”
But this week’s carnage around Georgia’s largest city prompted Biden, accompanied by Vice President Kamala Harris, to add a meeting with Asian-Americans.

Suspect arrested
Three massage parlors around Atlanta were targeted Tuesday, and a 21-year-old suspect was arrested.
Robert Aaron Long faces eight counts of murder and one charge of aggravated assault.
Of the eight fatalities, six were women of Asian descent.
Biden said it was “heart-wrenching” to listen to the grieving community members.
Among them was Stephanie Cho, executive director of Asian Americans Advancing Justice-Atlanta.
“It was very emotional to hear” messages by the victims’ families read aloud to the president and vice president, Cho told CNN afterwards.
She said the Asian-American women in the room, including Harris whose mother was an Indian immigrant, “had a very somber moment” considering the issue centered around violence against women of Asian descent.
Long has admitted carrying out the attacks, according to law enforcement, but claims he was not motivated by racial hatred.
Officers said Long told police he was grappling with a sexual addiction and that he wanted to “eliminate” a temptation that put him in conflict with his strict religious beliefs.
Authorities have not confirmed the motive, but the killings were seen as laying bare the intersection of sexism and racism in the United States.

Flags at half-staff
The four women killed in Atlanta itself — at two neighboring spas — were named Friday by the Fulton County medical examiner’s office as Hyun J. Grant, 51; Soon C. Park, 74; Yong A. Yue, 63; and Suncha Kim, 69.
Grant, who worked at the Gold Spa, left behind two sons — the eldest of whom, Randy Park, 23, set up a fundraising page which by Friday had attracted more than $1.9 million in donations.
“She was a single mother who dedicated her whole life to providing for my brother and I,” Park wrote. “Losing her has put a new lens on my eyes on the amount of hate that exists in our world.”
The other four victims — targeted at Young’s Asian Massage in the Atlanta suburb of Acworth — included Xiaojie Tan, the spa’s 49-year-old owner described as “the sweetest, kindest, most giving person” by a longtime customer, Greg Hynson, speaking to The New York Times.
The attack also claimed the lives of Delaina Yaun, 33 — a mother of two who was at the spa for a couple’s massage with her husband — as well as 44-year-old employee Daoyou Feng, and Paul Andre Michels, 54, who was on site doing maintenance.
Biden ordered flags to be flown at half-staff at the White House and other public buildings until Monday as a mark of respect for the Atlanta victims. The House of Representatives held a moment of silence Friday.
Also in Washington, an extraordinary House hearing Thursday heard testimony from four Asian-American congresswomen.
Democrat Grace Meng warned that Republican rhetoric that paints Asians as responsible for the virus has put “a bull’s eye on the back of Asian-Americans.”
Vigils have been held in several US cities, and police in New York, Seattle, Chicago, San Francisco and elsewhere stepped up patrols in areas with large Asian-American populations.
Georgia is home to nearly 500,000 people of Asian origin, or just over four percent of its population.

These were the details of the news Philippines reports record 7,999 new COVID-19 infections for this day. We hope that we have succeeded by giving you the full details and information. To follow all our news, you can subscribe to the alerts system or to one of our different systems to provide you with all that is new.