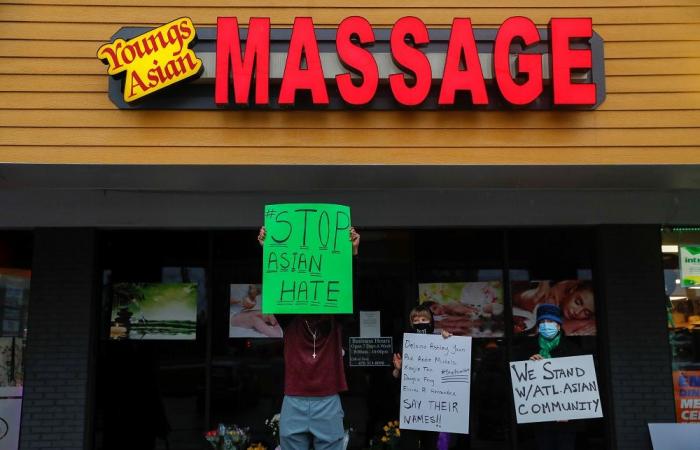 Hello and welcome to the details of Motive in Georgia spa shootings uncertain, but Asian Americans still fearful and now with the details

ATLANTA, March 18 ― Georgia authorities charged a man with the fatal shootings of eight people, including six Asian women, at Atlanta-area spas in crimes that heightened fears among Asian Americans already rattled by a rise in racial attacks since the start of the pandemic.

The 21-year-old suspect, Robert Aaron Long, told authorities sex addiction drove him to commit the killings and indicated he frequented spas in the area.

However, authorities did not discount the possibility that the attacks were inspired at least in part by an anti-immigrant or anti-Asian sentiment, or some personal grievance.

“The suspect did take responsibility for the shooting,” Captain Jay Baker of the Cherokee County Sheriff's Department told a news conference.

“These locations, he sees them as an outlet for him, something that he shouldn't be doing,” Baker said. “It's a temptation for him that he wanted to eliminate.”

Long was charged yesterday with eight counts of murder and one count of aggravated assault, according to law enforcement officials in Atlanta and Cherokee County, about 40 miles (64km) north of the state capital. Long was being held in Cherokee County.

Long was heading to Florida when he was apprehended, perhaps to carry out further shootings, authorities said. A 9mm firearm was found in his car.

Officials said Long indicated he may have frequented the spas where Tuesday's violence occurred, although authorities could not immediately confirm whether he visited any of them in the past. It was not clear if the suspect visited spas for sex.

“This is still an ongoing investigation and at this time we cannot answer any questions pertaining to the businesses, nor services that any of these locations were offering during or before this incident took place,” Officer CJ Johnson of the Atlanta Police Department said in a statement.

US President Joe Biden said he was briefed by the US attorney general and FBI director on the shootings.

“The question of motivation is still to be determined,” Biden told reporters at the White House. “But whatever the motivation here I know that Asian Americans are very concerned.”

A report by the Center for the Study of Hate and Extremism this month showed that hate crimes against Asian Americans in 16 major US cities rose by 149 per cent from 2019 to 2020, a period when overall hate crimes dropped 7 per cent.

The advocacy group Stop AAPI Hate has said the rise appeared to result from Asians and Asian Americans being blamed for the pandemic, which originated in China. Former President Donald Trump called the novel coronavirus the “China virus,” the “China plague” and even the “kung flu.”

“It's very difficult to ignore that the Asian community has once again been targeted, and it's happening across the country,” Atlanta Mayor Keisha Lance Bottoms told CNN. “And it's unfortunate, and it makes no sense in it, it needs to stop.”

Nonetheless, authorities said that nothing that Long told them in interviews had indicated that he was motivated by racial animosity, though they stressed that the investigation was in its early stages.

The bloodshed began about 5pm on Tuesday when four people were killed and another was wounded at Young's Asian Massage in Cherokee County, Baker said. Two women of Asian descent were among the dead there, along with a white woman and a white man, Baker said. The surviving victim was a Hispanic man.

While investigating the initial report, the officers were called to a separate spa across the street where another woman was found dead from a gunshot wound, Bryant said. All four women killed in Atlanta were of Asian descent.

Long was spotted in southern Georgia, far from the crime scenes, after police in Cherokee County issued a bulletin. He was arrested without incident after a highway pursuit, law enforcement officials said.

His first appearance in court was scheduled for today but was cancelled led without explanation.

Long's quick apprehension was aided by his family's cooperation with law enforcement and by footage of the suspect from security cameras at the shootings' locations, police said.

“We are really appreciative of the family. Without them this would not have happened as quickly as it happened. They were very supportive,” Baker said.

The killings were the latest in a string of mass shootings at schools, movie theaters, medical clinics and other public places in the United States over the past decades.

Long purchased the gun found in his car legally at Big Woods Goods in Holly Springs, Georgia, CNN said, citing an attorney for the company.

Gun control is a divisive issue in the United States, which enshrines the right to bear arms in the Constitution. The US House of Representatives last week approved a pair of gun control bills as Democrats seized upon a shifting political landscape that they said improved chances for enacting new laws after years of failed attempts.

“We are witnessing the results of what happens when racist and misogynistic ideologies collide in a society where there is also easy access to guns,” Amnesty International USA said in a statement. ― Reuters

These were the details of the news Motive in Georgia spa shootings uncertain, but Asian Americans still fearful for this day. We hope that we have succeeded by giving you the full details and information. To follow all our news, you can subscribe to the alerts system or to one of our different systems to provide you with all that is new.