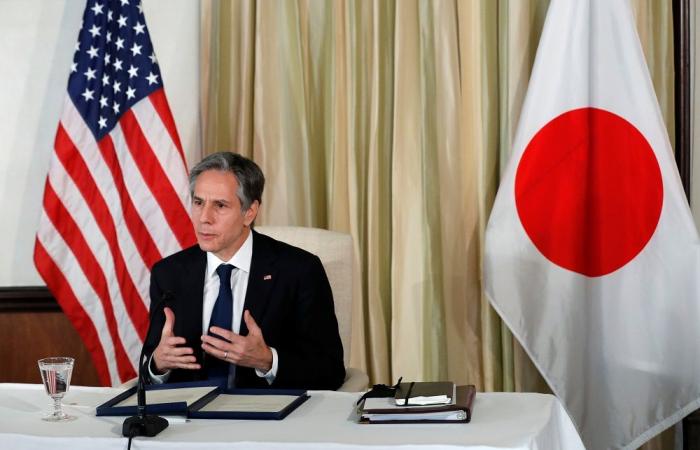 Hello and welcome to the details of Biden's secretary of state makes overseas debut with visit to Japan, Korea and now with the details

TOKYO, March 16 ― US Secretary of State Antony Blinken and Defence Secretary Lloyd Austin were set to meet counterparts in Tokyo today, highlighting a focus by the new Washington administration on alliances in Indo-Pacific in the face of assertive China.

The visit, from March 15 to 18, to Tokyo and Seoul is the first overseas trip by top cabinet members of President Joe Biden's team and follows last week's Quad alliance summit of the leaders of the United States, Japan, Australia and India.

Issues on the agenda range from freedom of navigation in the South and East China Seas and semiconductor supply-chain security to the North Korean nuclear issue and a military coup in Myanmar, experts say.

North Korea is likely to be in sharp focus after the White House said Pyongyang had so far rebuffed efforts from the United States to engage in dialogue. North Korea warned the new US administration against “causing a stink” if it wants peace, North Korean state media reported today.

The trip sends an “important signal of resolve to work with allies” at a time when the region faces mounting pressure from China and continued threat from North Korea's nuclear weapons and ballistic missile programmes, Sung Kim, the Acting Assistant Secretary for East Asian and Pacific Affairs told reporters during a briefing ahead of the visit.

The Quad summit pledged to work to ensure a free and open Indo-Pacific, a major priority for Tokyo, and cooperate on maritime, cyber and economic security in the face of challenges from Beijing.

“The most important thing that's going to happen on this trip is that Secretary Blinken and Secretary Austin are making Japan and Korea (and India for Secretary Austin) the first steps on their first trip to the region,” said Brian Harding, a Southeast Asia expert at the US Institute of Peace.

“So, by touching down in Tokyo, in a lot of ways, it'll already be successful, and sends an incredibly powerful signal about the priorities of this administration.”

Analysts also expect Tokyo to seek US support for the upcoming Tokyo Olympics and follow-up talks on other subjects that figured at the Quad summit, such as the commitment to boost Covid-19 vaccine supplies in Asia and climate change.

The secretaries are expected to make a courtesy call on Japanese Prime Minister Yoshihide Suga, who is set to visit the White House as the first foreign leader to meet Biden in April.

Blinken and Austin will meet Japan's Foreign Minister Toshimitsu Motegi and Defence Minister Nobuo Kishi in what is known as the 2+2 talks.

Both officials will leave Tokyo for Seoul tomorrow and hold talks with counterparts in the South Korean capital until Thursday. ― Reuters

These were the details of the news Biden's secretary of state makes overseas debut with visit to Japan, Korea for this day. We hope that we have succeeded by giving you the full details and information. To follow all our news, you can subscribe to the alerts system or to one of our different systems to provide you with all that is new.