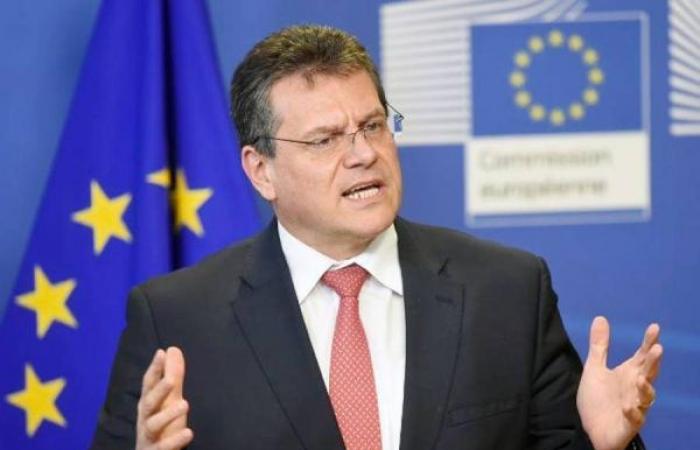 We show you our most important and recent visitors news details EU begins legal action against UK over 'breaches' related to N. Ireland protocol in the following article

Hind Al Soulia - Riyadh - BRUSSELS — The European Union says it has begun legal action against the UK over "breaches" related to the Northern Ireland protocol.

The protocol forms part of the Brexit agreement and is designed to avoid a so-called hard border between Northern Ireland — which, as part of the UK has left the EU — and Ireland, which remains a member of the bloc.

Brussels is accusing London of failing to implement the protocol. Specifically, it is upset over the UK's decision earlier this month to extend a grace period for some British exporters to Northern Ireland regarding the need for export certificates.

Major exporters were initially given a three-month grace period to avoid the extra bureaucracy, which became necessary after Brexit kicked in earlier this year.

But, amid supply issues at some Northern Ireland supermarkets, London decided to extend the grace period until October.

“The Protocol on Ireland and Northern Ireland is the only way to protect the Good Friday (Belfast) Agreement and to preserve peace and stability while avoiding a hard border on the island of Ireland and maintaining the integrity of the EU single market," said the EU's Maroš Šefčovič.

"The EU and the UK agreed the Protocol together. We are also bound to implement it together. Unilateral decisions and international law violations by the UK defeat its very purpose and undermine trust between us.

"The UK must properly implement it if we are to achieve our objectives. That is why we are launching legal action today.

“I do hope that through the collaborative, pragmatic and constructive spirit that has prevailed in our work so far on implementing the Withdrawal Agreement, we can solve these issues in the Joint Committee without recourse to further legal means.” — Euronews

These were the details of the news EU begins legal action against UK over 'breaches' related to N. Ireland protocol for this day. We hope that we have succeeded by giving you the full details and information. To follow all our news, you can subscribe to the alerts system or to one of our different systems to provide you with all that is new.