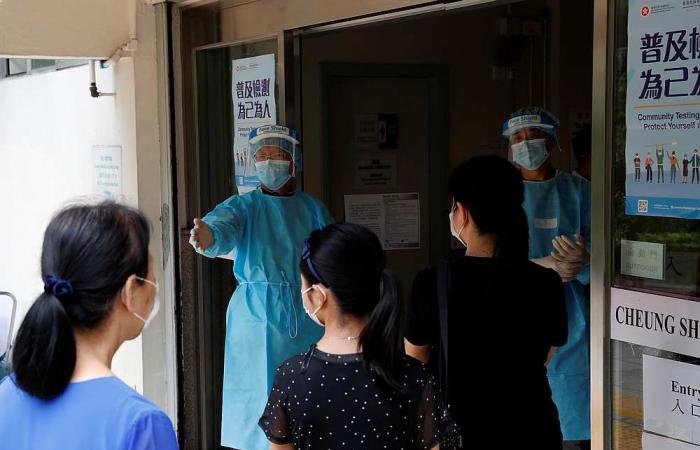 Hello and welcome to the details of Hong Kong’s tough Covid-19 rules see babies isolated, families cramped in tiny spaces and now with the details

HONG KONG, March 15 — Families in Asia’s financial hub of Hong Kong are suffering isolation and trauma after strict coronavirus rules have led to babies being separated from parents and those with newborns herded into tiny quarantine quarters for up to 14 days.

Hong Kong authorities have ordered that anyone testing positive for the virus must go to hospital, including babies, while all their close contacts, even those who test negative, are sent to makeshift quarantine camps.

“It’s crazy,” said one mother, who said she had to abruptly stop breastfeeding following separation from her seven-month-old son last week after she was diagnosed with Covid-19.

“I got fever last night because I have gone from breastfeeding to 100% pumping,” said the woman, who asked not to be identified.

The separation of families over the virus is not common in other developed cities, say legal experts.

Hong Kong’s government did not immediately respond to requests for comment.

Shahana Hoque-Ali, a scientist who moderates the Hong Kong Quarantine support group on Facebook, said it had assisted in more than 100 cases of children who had faced separation from their parents over the past year, with dozens in the past week.

She urged families to push back against such steps, saying they should stay with their children, particularly those being breastfed.

Many expatriate families with young children were among the hundreds of residents sent to quarantine last week after an outbreak at a popular upmarket gym in Hong Kong’s Sai Ying Pun district.

That case has ensnared bankers, lawyers and the city’s international school network, with some teachers and students infected.

Separately, a group of eight babies and parents who attended a playgroup last week were sent to quarantine after one parent was confirmed positive because of the gym outbreak.

The rest of the group tested negative but they were still required to quarantine.

“I am really worried, it’s such a small space. Three of us in this room for 10 days won’t work,” said Nicholas Worley, whose wife Kylie and 15-month-old son, Hunter, attended the playgroup.

The quarantine rooms in Penny’s Bay that accommodate Worley and many others are 18 sq. m. (194 sq. ft) in size and lack refrigerators, cooking facilities or baby amenities.

While staff there did their best to assist, the facility is not designed for families, the residents said.

Worley, who heads consultancy Bain’s public relations in Asia, said hazards in the room, such as sharp nails and edges, fuelled additional concern over his son’s safety.

The trauma and psychological impact on families is intense, said a 40-year-old man in quarantine with his two young children.

“It’s an absolute nightmare, it is just such a mess,” said the man, who sought anonymity.

Yesterday a class of 35 nine-year-olds from the city’s Harbour School were told they needed to enter quarantine, its managing director, Dan Blurton, told Reuters.

“Parents and the school have strongly requested for alternative arrangements that are more humane, with regards to the treatment of young children,” he added.

Legal experts said there were no set guidelines regarding family separations, with each case being handled individually.

Hong Kong barrister Kirsteen Lau said that legally health officers had wide discretion to grant or deny permission for a child or parent to enter a place of isolation.

However, this meant that regulations “give very little guidance as to what circumstances would allow a parent and child to stay together,” she added. — Reuters

These were the details of the news Hong Kong’s tough Covid-19 rules see babies isolated, families cramped in tiny spaces for this day. We hope that we have succeeded by giving you the full details and information. To follow all our news, you can subscribe to the alerts system or to one of our different systems to provide you with all that is new.