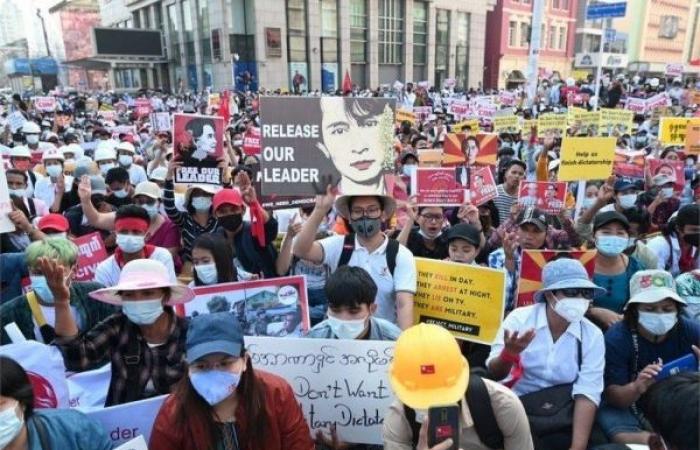 Hind Al Soulia - Riyadh - HONG KONG — Bloodshed continues in Myanmar after another violent day on Thursday saw at least 12 people killed by the ruling junta, according to a watchdog group, prompting a top UN official to say the crackdown on peaceful protests is "likely meeting the legal threshold for crimes against humanity."

In the small, central town of Myaing, police shot into a crowd of unarmed people, killing at least eight, according to advocacy group Assistance Association for Political Prisoners (AAPP). Images posted on social media showed the town's roads streaked with blood and bodies laying crumpled and lifeless in the street.

In one unverified graphic image, a body can be seen with the head blown apart and brain remnants spilled onto the road.

The shootings in tiny Myaing are further evidence the military junta, which seized power in a coup on Feb. 1, is attempting to crush peaceful opposition to its enforced rule in every corner of Myanmar, not just the big towns and cities.

In the biggest city, Yangon, Thursday, protester Chit Min Thu was killed in the North Dagon area, according to Reuters. His wife, Aye Myat Thu, told the news agency he had insisted on joining the protests despite her appeals for him to stay home for the sake of their son.

"He said it's worth dying for," she said. "He is worried about people not joining the protest. If so, democracy will not return to the country."

At least 80 people have been killed since the military invalidated the results of the country's democratic election, the United Nations human rights office said, and hundreds more injured. At least four of the deaths in recent days were individuals arrested and detained by the junta, including two officials with the ousted National League for Democracy (NLD) party. All four died in custody, according to the Office of the UN High Commissioner for Human Rights.

More than 2,000 people have been arbitrarily detained since the coup, according to AAPP, many of them kept out of contact with family and friends, their condition or whereabouts unknown.

Myanmar's state-run daily newspaper published a notice on Wednesday reinforcing the military's narrative that it is using minimum force against protesters.

On Thursday, the UN special rapporteur for human rights in Myanmar, Tom Andrews, said in a statement to the UN Human Rights Council in Geneva that a "growing body of reporting" indicates the junta's security forces are committing "acts of murder, imprisonment, persecution and other crimes as part of a coordinated campaign, directed against a civilian population, in a widespread and systematic manner, with the knowledge of the junta's leadership."

The "brutal response," he said, is "thereby likely meeting the legal threshold for crimes against humanity."

He called on UN member states to stop the flow of revenue and weapons to the junta, saying multilateral sanctions "should be imposed" on senior leaders, military-owned and controlled enterprises and the state energy firm, Myanmar Oil and Gas Enterprise.

His statement came after rights group Amnesty International released a report saying the military were embarking on a "killing spree" in Myanmar, using increasingly lethal tactics and weapons normally seen on the battlefield against peaceful protesters and bystanders.

By verifying more than 50 videos from the ongoing crackdown, Amnesty's Crisis Evidence Lab confirmed security forces appear to be implementing planned, systematic strategies, including the ramped-up use of lethal force, indiscriminate spraying of live ammunition in urban areas, and that many of the killings documented amount to extrajudicial executions.

"These Myanmar military tactics are far from new, but their killing sprees have never before been live-streamed for the world to see," said Joanne Mariner, director of crisis response at Amnesty International. "These are not the actions of overwhelmed, individual officers making poor decisions. These are unrepentant commanders already implicated in crimes against humanity, deploying their troops and murderous methods in the open.

There is evidence the violence is forcing people to flee the country. Between 200 and 300 people have crossed the border from Myanmar into India's northeastern state of Mizoram, fleeing the unrest, Mizoram's chief minister said.

That number includes police, civil servants, their family members, and other civilian,s and the number of people fleeing increases daily, according to Chief Minister PU Zoramthanga.

"We (the Mizoram government) are not sending them back from a humanitarian point of view. When somebody enters the land, the country's border, for fear of their lives we cannot simply send them back. They are not criminals. It is a political issue," he said.

Zormanthanga added that people are given food and shelter, and many have family in Mizoram. He said it is up to the Indian central government on how to deal with people crossing the border.

Ousted civilian leader Aung San Suu Kyi was accused of bribery and corruption by the military Thursday, adding to four charges already against her that could result in a years-long prison sentence.

Military spokesperson Brig. Gen. Zaw Min Tun said in a news conference that Suu Kyi accepted illegal payments worth $600,000, as well as gold, while in government, according to Reuters.

The spokesperson added that the information had been verified following a complaint from a former Yangon regional minister, and an anti-corruption committee was investigating.

"I have been in politics in Myanmar for nearly 40 years, and in all these years I have not witnessed such shameless allegations," he said. "We are in a country where the people have seen lots of corruption in the past and many misbehaviors, but Aung San Suu Kyi is not in that sphere of corruption."

He added that while he has had "many disagreements" with Suu Kyi, "when it comes corruption, bribery, greed — this is not her, she is not that kind of woman." — Courtesy CNN

These were the details of the news Streets of blood in Myanmar town as UN fears 'crimes against humanity' for this day. We hope that we have succeeded by giving you the full details and information. To follow all our news, you can subscribe to the alerts system or to one of our different systems to provide you with all that is new.