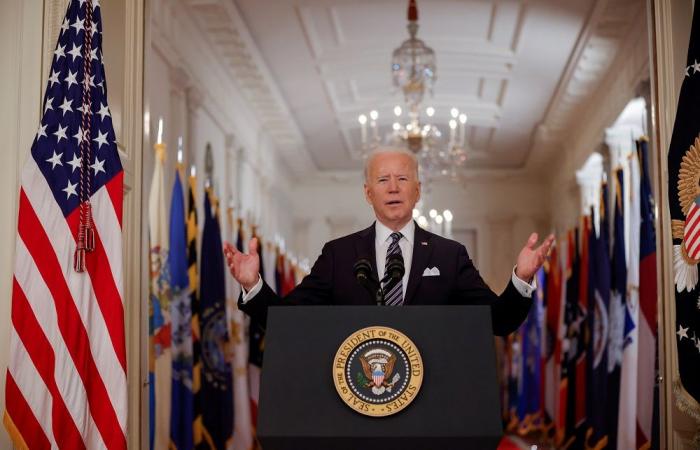 Hello and welcome to the details of Urging vigilance, somber Biden tells US states to speed up vaccinations and now with the details

WASHINGTON, March 11 — President Joe Biden directed US states yesterday to make all adults eligible for the coronavirus vaccine by May 1 and urged Americans to stay vigilant or face more restrictions, hours after he signed a US$1.9 trillion (RM7.8 trillion) stimulus bill into law.

In a forceful but somber speech from the White House on the first anniversary of the pandemic lockdown, Biden said he was working to accelerate Covid-19 vaccinations to create a greater sense of normalcy in the country by the July 4 Independence Day holiday.

That date is a new goal for the president, but he also warned Americans that further pain and death were still to come from the virus that has killed more than 530,000 people in the United States, the most of any country. Coronavirus-related lockdowns and restrictions have cost millions of jobs.

“If we don’t stay vigilant and the conditions change, then we may have to reinstate restrictions to get back on track,” he said in an evening address from the White House. “We’ve made so much progress. This is not the time to let up.”

Republicans swiftly criticised Biden for his cautious approach. “What America needs now is to fully reopen our economy and our classrooms,” House of Representatives Republican leader Kevin McCarthy said on Twitter.

Biden said he was ordering US states, territories and tribes to make all adults eligible to receive a coronavirus vaccine by May 1. The White House has said it would have enough vaccine supply to vaccinate the population by the end of May. About 10 per cent of Americans have so far been fully vaccinated.

The president said more US troops would help in the vaccination effort. Administration officials said he would deploy 4,000 more troops, bringing the total number to 6,000.

The White House is also seeking to expand the pool of people able to administer shots to include dentists, optometrists, paramedics, veterinarians and medical students.

Biden campaigned last year on a promise that he would tackle the pandemic more effectively than Republican President Donald Trump, and he has sought to encourage and model behaviour, such as mask-wearing, that Trump eschewed.

In his speech, Biden took a swipe at his predecessor by saying the virus was initially met with “denials for days, then weeks, then months, that led to more deaths, more infections, more stress, more loneliness.”

Biden said hate crimes and harassment against Asian Americans must stop. Trump repeatedly referred to the disease as the “China virus.”

Biden also encouraged Americans to keep up mitigation efforts — wearing masks, keeping socially distant and practicing good hygiene — to stop the virus and its variants from spreading. A number of states have been loosening restrictions as Americans, like many people around the world, grow weary of pandemic life.

“Photos and videos from 2019 feel like they were taken in another era. The last vacation. The last birthday with friends. The last holiday with extended family,” Biden said, recounting the toll the virus has taken over the last year.

He said the country would come away from the crisis stronger. “We faced and overcame one of the toughest and darkest periods in this nation’s history,” he said.

Earlier in the day, Biden signed the American Rescue Plan law, designed to be a financial bridge to hard-hit Americans and a boost to the economy, with Vice President Kamala Harris at his side in the Oval Office. The US$1.9 trillion package is a major political victory for the Democratic president fewer than two months into his administration.

Biden and top members of his administration will embark on a victory lap in the coming weeks to laud and explain the legislation, which got final approval from the US House of Representatives on Wednesday.

The package provides US$400 billion for US$1,400 direct payments to most Americans, US$350 billion in aid to state and local governments, an expansion of the child tax credit and increased funding for Covid-19 vaccine distribution. The bill passed without a single vote from Republicans, who complained the price tag was too high.

Biden will discuss the benefits of the pandemic relief bill during trips to Pennsylvania next Tuesday and Atlanta on March 19.

The lockdown from Covid-19 began under Trump, who played down the crisis in its early stages while repeatedly predicting the virus would soon disappear even as his administration pushed to speed up vaccine development.

The former president and his wife, Melania Trump, did not appear in a public service announcement released yesterday encouraging Covid-19 vaccinations and featuring all of the other living former US presidents and their spouses. — Reuters

These were the details of the news Urging vigilance, somber Biden tells US states to speed up vaccinations for this day. We hope that we have succeeded by giving you the full details and information. To follow all our news, you can subscribe to the alerts system or to one of our different systems to provide you with all that is new.