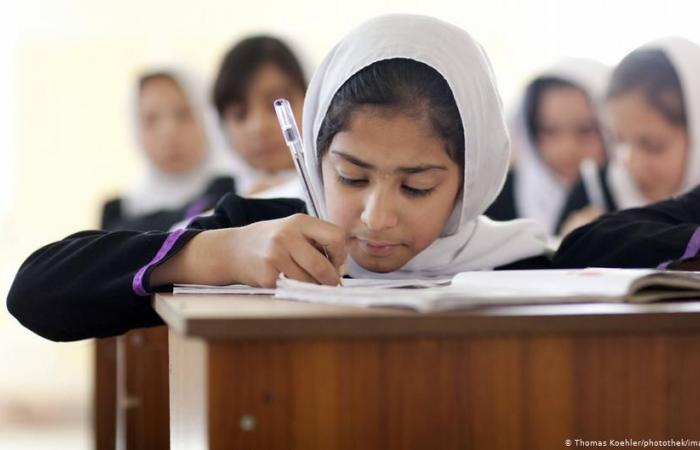 The reports come amid growing fears that the Taliban could regaining power in Afghanistan as the group negotiates a peace deal with the United States.

Schoolgirls older than 12 will only be able to sing at events that are “100 percent attended by women,” according to a letter of the decision shared by the Kabul-based broadcaster Ariana News on Twitter.

A spokeswoman for the Education Ministry confirmed the letter’s authenticity, adding that the decision applies to all provinces, Germany’s DPA news agency reported.

In video message circulated by media, the spokeswoman, Najeeba Arian, said the decision was made after suggestions by students and parents.

Male singing teachers will also be prohibited from teaching schoolgirls, according to the Kabul Now news outlet. School principals would be responsible for implementing the ban, the report added.

‘Not a good look’

The decision has sparked outrage on social media platforms as people compared the government’s decision to the Taliban’s ideology.

Some Twitter users contested the ban by sharing old images and footage of young girls dancing and singing.

“It’s not a good look on the Republic if they start emulating the same values as the Taliban,” the journalist Ruchi Kumar wrote on Twitter as she shared a video showing girls singing on television.

Some people noted that Education Minister Rangina Hamidi has long presented herself as a women’s rights advocate.

“I once read that you were ‘one of the leading voices for Afghan women’. But I didn’t know you would use your voice to shut down those of young Afghan girls. We’d all love to hear the logic behind this. What is the goal?” one Twitter user said.

Other users posted in favor of the decision, writing that parents might have reported harassment and urged protection for their children.

But such comments were met by criticism from others, who argued that banning girls from singing would not end the harassment.

The Taliban held power over the majority of Afghanistan for almost five years until the US-led invasion overthrew the group in 2001.

Since then, advances for women’s rights in Afghanistan have spread from urban cities to villages, with more opportunities for education and professions.

Attacks against women journalists are on the rise in Afghanistan.

Women fear losing the rights that they gained when the Taliban was overthrown as leaders try to negotiate the group’s return to politics.

These were the details of the news Afghanistan bans schoolgirls older than 12 from singing — reports for this day. We hope that we have succeeded by giving you the full details and information. To follow all our news, you can subscribe to the alerts system or to one of our different systems to provide you with all that is new.