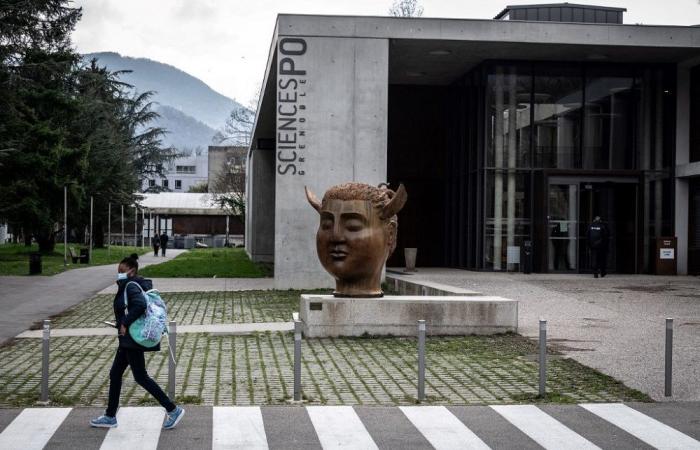 Student groups plastered posters last week on the walls of a leading political science faculty in Grenoble that likened the professors to “fascists” and named them both in a campaign backed by the UNEF student union.

“These are really odious acts after what happened with the decapitation of Samuel Paty who was smeared in the same way on social networks,” she said on the BFM news channel. “We can’t put up with this type of thing.”

“When something is viewed as racist or discriminatory, there’s a hierarchy where you can report these types of issues, which will speak to the professor and take action if anything is proven,” Schiappa said.

Sciences Po university, which runs the Institute of Political Studies (IEP) in Grenoble in eastern France, also condemned the campaign yesterday and has filed a criminal complaint.

An investigation has been opened into slander and property damage after the posters saying “Fascists in our lecture halls. Islamophobia kills” were found on the walls of the faculty.

One of the professors is in charge of a course called “Islam and Muslims in contemporary France” while the other is a lecturer in German who has taught at the faculty for 25 years.

Interior Minister Gerald Darmanin said the two professors had been placed under police protection which could be reinforced in future.

“Protection measures have been taken,” Darmanin told reporters, saying he would not give details “because the measures must be discreet”.

The incident is the latest in a series of controversies in France about Islam, hate speech and secularism.

France has a strict form of secularism and a long and bloody history of battling to free the state from the influence of religion.

Its laws also permit blasphemy and criticism of religions, although these are challenged by some campaigners who see them as allowing hurtful comments and encouraging Islamophobia.

France’s higher education minister recently warned about “Islamo-leftism” in academic institutions — a charge against left-wing campaigners who question these traditions.

Paty was killed by a teenager of Chechen origin after showing cartoons of the prophet Mohammed, which are offensive to some Muslims, during a class on free speech at his secondary school.

A schoolgirl who fanned outrage online with false allegations that Muslims had been asked to leave the room when the cartoons were shown has confessed to police that she was not in the class, reports said on Sunday.

A tough new security law being discussed in the French parliament would make publishing personal information about a public servant knowing that doing so could cause them harm an offence punishable by up to three years in prison. — AFP

These were the details of the news Controversy after French professors accused of Islamophobia for this day. We hope that we have succeeded by giving you the full details and information. To follow all our news, you can subscribe to the alerts system or to one of our different systems to provide you with all that is new.