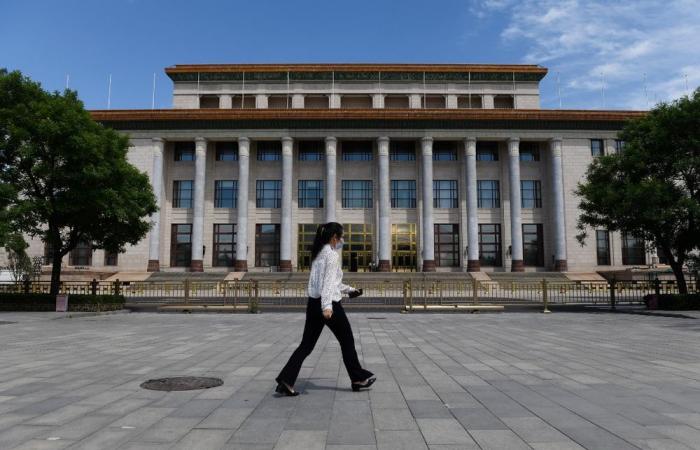 China has ushered in a sweeping crackdown against critics in the semi-autonomous financial hub after huge and often violent pro-democracy protests rocked the city in 2019.

The territory dominated headlines during last year’s NPC session when delegates endorsed a tough security law designed to stamp out dissent there.

Chinese state media has run editorials in recent weeks saying “electoral loopholes” will be plugged, while officials have said only “staunch patriots” — those loyal to the ruling Communist Party — should be involved in governing Hong Kong.

Dozens of Hong Kong dissidents were jailed yesterday for subversion in the broadest use yet of the security legislation enacted by Beijing last year.

The annual gathering of roughly 3,000 delegates, held in the cavernous Great Hall of the People in Beijing, is China’s biggest political event of the year.

It is a highly choreographed display meant to drive home the unquestioned domestic power of the Communist Party while updating China and the world on the government’s economic, political, environment and foreign policy priorities.

The event opens with China outpacing other major economies after bringing the coronavirus pandemic, which first emerged on its soil, under control through draconian lockdowns and mass testing.

The centrepiece is the annual report by Li — China’s equivalent of a “state of the nation” address — which is expected to start shortly after 9:00am (0100 GMT).

But he broke with precedent last year, providing no benchmark due to the “great uncertainty” of the pandemic, which also had pushed back the legislative session for two months, the first delay in decades.

China’s economy has rebounded since, however, and some key industrial provinces have already begun announcing local growth targets.

The pandemic is now largely under control within its borders, though questions linger about Chinese missteps that allowed it to spread globally.

Tight restrictions remain, especially in Beijing during the Congress session.

Planned or potential legislation includes a proposed revision to wildlife protection laws that would permanently ban eating most wildlife, amid the belief that the pandemic came from an animal host.

There also is a proposal to tighten data protection in a country that has embraced facial recognition, mobile payments and other digital solutions, but with attendant fears of identity theft.

These were the details of the news Hong Kong tops agenda as China readies for annual Congress for this day. We hope that we have succeeded by giving you the full details and information. To follow all our news, you can subscribe to the alerts system or to one of our different systems to provide you with all that is new.