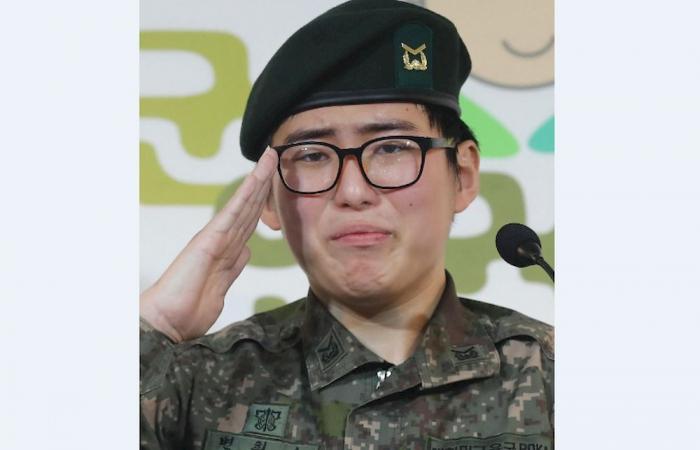 CHEONGJU, Mar 4 — A transgender South Korean soldier who was forcibly discharged from the army after gender-reassignment surgery has been found dead, police said, prompting anger today and calls for legal reforms.

Firefighters found Byun Hee-soo in her home in Cheongju after a mental health counsellor called emergency services to report that she had not been heard from for several days, Yonhap news agency reported.

South Korea remains deeply conservative about matters of sexual identity and is less tolerant of LGBT rights than some other parts of Asia, with many gay and transgender Koreans living largely under the radar.

Byun, formerly a staff sergeant and in her 20s, enlisted voluntarily in 2017. She went on to have gender-reassignment surgery in 2019 in Thailand.

The defence ministry classified the removal of her male genitals as a mental or physical handicap, and a military panel ruled last year that she would be compulsorily discharged.

At the time she waived her anonymity to appear at a press conference, pleading tearfully to be allowed to serve, wearing her fatigues and saluting the gathered journalists and cameras.

“I’m a soldier of the Republic of Korea,” she said, her voice breaking.

Reports said no note was found but the death was being treated as suicide, with Yonhap citing officials saying she had tried to kill herself three months ago.

Byun’s death triggered an outpouring of grief and calls for South Korean MPs to pass an anti-discrimination bill.

A memorial altar for Byun was set up at a local hospital where friends and activists paid their respects today.

Wreaths of white chrysanthemums — a symbol of mourning in Korea — surrounded a portrait of a smiling Byun, in civilian dress.

Tributes were presented by rights groups and liberal politicians including parliamentary vice-speaker Kim Sang-hee, who is the highest-ranking female parliamentarian in South Korea.

After paying her respects, Hong Jeung-sun, a 64-year-old LGBT rights activist whose son came out as gay, told AFP: “This is the third suicide by a member of a sexual minority over the past month alone.

“And there could have been many more who perished in the shadows without us ever knowing. As a parent, it breaks my heart,” she added tearfully.

Byun will be laid to rest tomorrow.

On Daum, the country’s second-largest web portal, one person wrote: “The whole of Korean society bears responsibility for her death.

“Those who ridiculed her and made malicious online comments because she was transgender, I want you to reflect on what you did to her.”

South Korea has a conscript army to defend itself against the nuclear-armed North, with all able-bodied male citizens obliged to serve for nearly two years.

But Byun was a volunteer non-commissioned officer and said at her press conference last year that serving in the military had always been her childhood dream.

“Putting aside my sexual identity, I want to show everyone that I can be one of the great soldiers defending this country,” she continued, fighting back tears. “Please give me that chance.”

Her case was the first of its kind in South Korea.

He added that there had been no detailed discussions about transgender soldiers serving in the military.

International rights groups have previously voiced concern about the way the country treats gay soldiers, who are banned from engaging in same-sex acts and can face up to two years in prison if caught — even though such actions are legal in civilian life.

Seo Ji-hyun, a prosecutor who triggered the country’s #MeToo movement by going public over sexual harassment she suffered at the hands of her superior, declared following Byun’s death: “We could have saved her... We just had to let her live life true to who she was.”

A new bill was proposed last year to take on the country’s deep-seated traditional social values, which are reinforced by powerful megachurches that condemn homosexuality.

The measure would ban favouritism based on sex, race, age, sexual orientation, disability or religion as well as several more unusual criteria such as criminal history, appearance and academic background.

More than a dozen attempts to pass broad anti-discrimination laws have failed over the past 14 years in the face of strong opposition from conservative churches and civic groups. — AFP

These were the details of the news Anger as South Korean transgender soldier found dead for this day. We hope that we have succeeded by giving you the full details and information. To follow all our news, you can subscribe to the alerts system or to one of our different systems to provide you with all that is new.