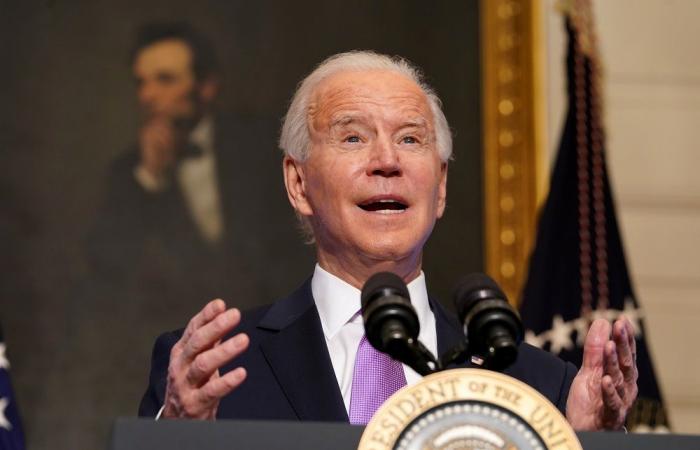 Hello and welcome to the details of US faces 'unprecedented assault on democracy,' White House says, backing election reform bill and now with the details

WASHINGTON, March 2 ― The Biden administration backed Democrats' efforts to overhaul voting rules and turn over the process of drawing congressional districts to independent commissions on Monday, weighing in on a political fight that is likely to dominate Washington in coming years.

The United States is facing an “an unprecedented assault on our democracy, a never before seen effort to ignore, undermine, and undo the will of the people, and a newly aggressive attack on voting rights taking place right now all across the country,” President Joe Biden's Office of Management and Budget said in a statement.

The House of Representatives is set to vote and likely to pass a sweeping election reform bill, HR-1, as soon as this week. Biden's fellow Democrats have a majority in the House, but the bill is unlikely to pass the Senate, where the measure would need support from all 50 members of that party caucus, plus 10 Republicans.

Republicans have said the law would take powers away from states and raise fraud concerns.

Democrats have been fighting to expand access to the polls through early voting, vote-by-mail and other measures, efforts that expanded as the coronavirus pandemic raged.

Republicans have been fighting those efforts and pursuing measures to curb access to the polls. Former President Donald Trump, in his first public speech after his stinging November 3 election loss to Biden, on Sunday proposed limiting absentee voting and days when Americans can vote.

Biden beat Trump by more than 7 million votes in the 2020 presidential election. Democrats enjoy an advantage over Republicans in voter party affiliation.

Trump never conceded the loss, and some of his supporters violently contested Congress' certification of Biden's win at the Capitol in a deadly January 6 riot.

Since then, dozens of local Republican lawmakers have introduced bills that would limit voting in states across the country.

Georgia's House of Representatives yesterday approved a bill that restricts ballot drop boxes and limits early voting on Sundays, curtailing traditional “Souls to the Polls” voter turnout programmes in Black churches. If passed by the Republican-controlled state Senate and signed into law by Republican governor Brian Kemp, the measure could be devastating for Black voters, activists have said.

A fight is also brewing over the forthcoming redrawing of a map that determines which areas of the country are represented by which House member. In many states that process is led by state legislatures, which are mostly controlled by Republicans.

Legislatures have historically redrawn the borders in ways that helped their party win more elections, sometimes minimising the influence of Black voters.

The House bill would turn much of that authority over to commissions that Republicans have said would not be accountable to citizens in their states. ― Reuters

These were the details of the news US faces 'unprecedented assault on democracy,' White House says, backing election reform bill for this day. We hope that we have succeeded by giving you the full details and information. To follow all our news, you can subscribe to the alerts system or to one of our different systems to provide you with all that is new.