World reacts to US report on Khashoggi killing 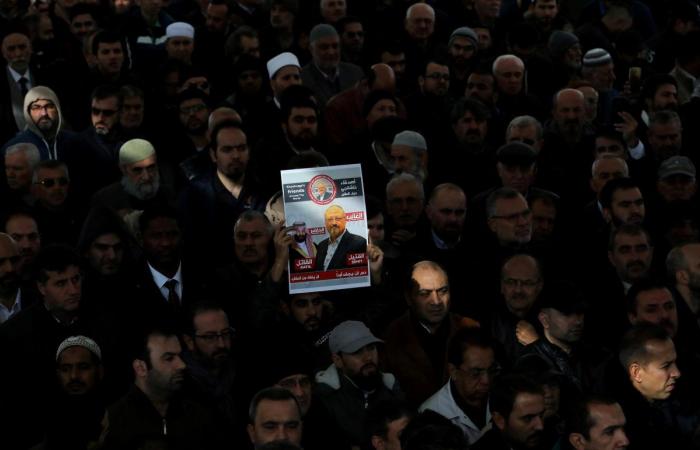 Mohamed Nass - Cairo - (Reuters) – The world reacted to the release on Friday of a US intelligence assessment that Saudi Crown Prince Mohammed bin Salman approved an operation to capture or kill dissident journalist Jamal Khashoggi:

OFFICE OF US DIRECTOR OF NATIONAL INTELLIGENCE REPORT:

“Since 2017, the Crown Prince has had absolute control of the Kingdom’s security and intelligence organizations, making it highly unlikely that Saudi officials would have carried out an operation of this nature without the Crown Prince’s authorization.”

“The government of the Kingdom of Saudi Arabia completely rejects the … assessment in the report pertaining to the Kingdom’s leadership, and notes that the report contained inaccurate information and conclusions.”

“The UK has always been clear that Jamal Khashoggi’s murder was a terrible crime.

“We called for a thorough, credible and transparent investigation to hold those responsible to account and imposed sanctions against 20 Saudis involved in the murder.

“The Foreign Secretary raised the issue during his visit to Riyadh last year, and we continue to raise it in our engagements with the Saudi government.”

“With the release of the US report, confirming Saudi officials’ culpability at the highest levels, the United States should now take the lead in ensuring accountability for this crime and for setting in place the international mechanisms to prevent and punish such acts in the future.”

“The United States government should impose sanctions against the Crown Prince, as it has done for the other perpetrators – targeting his personal assets but also his international engagements.”

“I call on the government of Saudi Arabia to disclose whether his remains were destroyed onsite or how and where they were disposed. The individuals responsible know only too well the specifics and, in the face of the Saudis’ unconscionable silence, the international community must exert pressure for full disclosure of all the facts.”

DEMOCRATIC SPEAKER OF THE US HOUSE OF REPRESENTATIVES NANCY PELOSI, IN A STATEMENT:

“The United States government must re-evaluate and recalibrate the relationship with Saudi Arabia, given the findings of this report, which are part of a disturbing pattern of human rights abuses from the Kingdom.”

“The United States Congress stands with President Biden in promoting transparency relating to human rights abuses and in supporting partnerships that advance our security, uphold our values and protect our interests. We support the steps being taken by the Administration to hold Saudi Arabia accountable, including related to Global Magnitsky and visa denials for human rights abusers.”

“The killing of Jamal Khashoggi was an unjust and gruesome crime, and has caused a major setback for the US-Saudi relationship. I have repeatedly said the United States must ensure everyone involved in this appalling crime is held accountable – and that now includes Crown Prince Mohammed bin Salman, whose role in this murder has been publicly affirmed.”

“The Biden administration should explore ways to ensure the repercussions for the brutal murder of Mr. Khashoggi go beyond those who carried it out, to the one who ordered it — the Crown Prince himself. He has blood on his hands and that blood belonged to an American resident and journalist. The president should not meet with the Crown Prince, or talk with him, and the administration should consider sanctions on assets in the Saudi Public Investment Fund he controls that have any link to the crime.”

“Thank you, Joe Biden, for transparency about Jamal Khashoggi’s murder. Now we need sanctions on the Saudi prince responsible.”

ALI SHIHABI, FORMER HEAD OF THE ARABIA FOUNDATION IN WASHINGTON, ON TWITTER:

“Extraordinary that all this hype is made about this document … This thin ‘report’ is actually evidence that no hard proof exists against MBS.”

“(This) was a murderous act, a despicable act. … We will look at the report that has been issued today but the fact remains that Canada wants the Kingdom of Saudi Arabia to allow a full inquiry so we can get to the bottom of what actually happened.”
KHASHOGGI’S FIANCEE HATICE CENGIZ, ON TWITTER:

“Since the day this innocent journalist was brutally murdered, we have called for two important actions: for the facts to come to light and for accountability on the part of those responsible. Today’s release of the report has brought the facts to light. Now, the man who authorized this brutal murder must be held fully accountable for it.”

These were the details of the news World reacts to US report on Khashoggi killing for this day. We hope that we have succeeded by giving you the full details and information. To follow all our news, you can subscribe to the alerts system or to one of our different systems to provide you with all that is new.