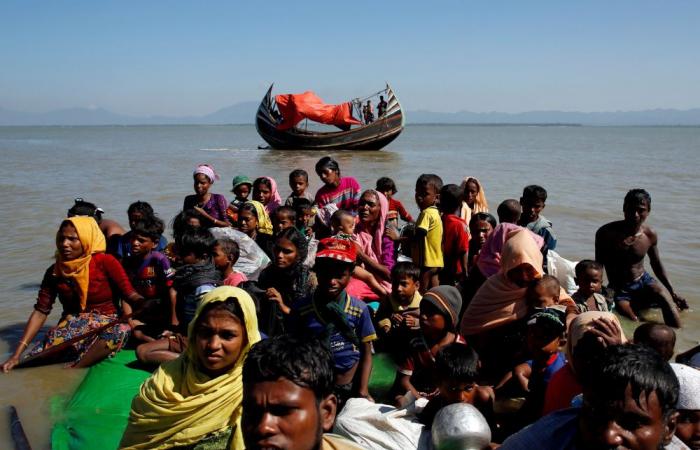 Hello and welcome to the details of Indian coast guard find 81 Rohingya adrift at sea, asks Bangladesh to take them and now with the details

KOLKATA, Feb 26 — India’s coast guard found 81 survivors and eight dead on a boat crammed with Muslim Rohingya refugees adrift in the Andaman Sea, and were repairing the vessel so that it can return safely to Bangladesh, Indian officials said today.

The Indian government was in discussions with Bangladesh to agree for the safe return of the vessel, which was found drifting in international waters, having left southern Bangladesh about two weeks ago with hopes of reaching Malaysia.

Many of the survivors, according to Indian officials, were sick and suffering from extreme dehydration, having run out of food and water after the boat’s engine failed four days after leaving Cox’s Bazar, where refugee camps house hundreds of thousands of Rohingya who have fled neighbouring Myanmar.

“The engine of the boat broke down earlier this week and we received a SOS from some Rohingyas,” said an Indian coast guard official overseeing the search and rescue effort from New Delhi.

“It’s a humanitarian crisis and we are doing the best we can to save their lives,” he said, requesting anonymity as he was not authorised to speak to the media.

“The foreign ministry is working towards sending them back to Bangladesh and India will repair or replace the boat’s engine to ensure they can travel back safely,” he said.

The survivors were being provided with food supplies and medicine, and women and children have been given fresh clothes. It was unclear what arrangements were being made for the funeral rites of the people who perished, he added.

The United Nations refugee agency had raised the alarm earlier this week over the missing boat, which had left Cox’s Bazar on February 11.

Of the 90 people that had set out on the voyage, eight were found dead, and one was missing, Srivasta said. Talks were underway with Bangladesh for the safe return of the 81 survivors, he added.

“Bangladesh is respectful of its international obligations under the UNCLOS (The United Nations Convention on the Law of the Sea),” Bangladesh’s foreign ministry said in a statement.

On earlier occasions when other littoral countries of the region repeatedly denied access to Rohingya adrift at sea, it was the Bangladesh that came to the rescue, the ministry added.

More than one million Rohingya refugees from Myanmar are living in crowded camps in Bangladesh, including tens of thousands who fled after Myanmar’s military conducted a deadly crackdown in 2017.

The Bangladesh statement said the boat had been traced approximately 1,700km away from Bangladesh and 147km from India’s Andaman and Nicobar Islands.

“Other states, particularly those on whose territorial water the vessel has been found, bear the primary responsibility and they should fulfil their obligation under international law and burden-sharing principle,” the ministry said.

India is not a signatory to the 1951 Refugee Convention, which spells out refugee rights and state responsibilities to protect them. Nor does it have a domestic law protecting refugees, though it currently hosts more than 200,000, including some Rohingya.

While India diplomats sought ways to resolve the humanitarian crisis in the Andaman Sea, Indian President Ram Nath Kovind was set to visit islands there during coming days. — Reuters

These were the details of the news Indian coast guard find 81 Rohingya adrift at sea, asks Bangladesh to take them for this day. We hope that we have succeeded by giving you the full details and information. To follow all our news, you can subscribe to the alerts system or to one of our different systems to provide you with all that is new.