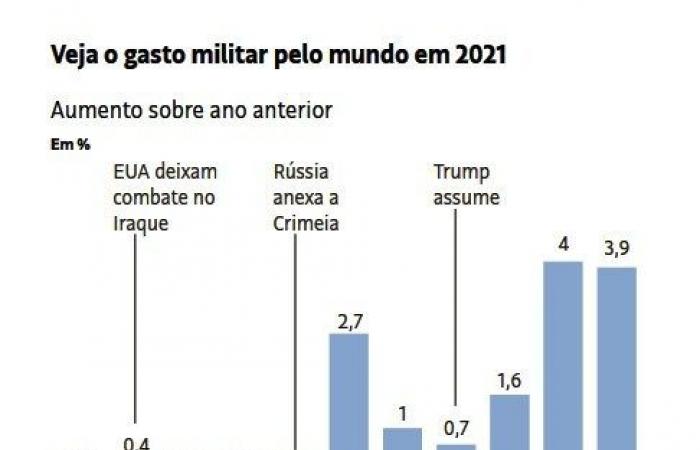 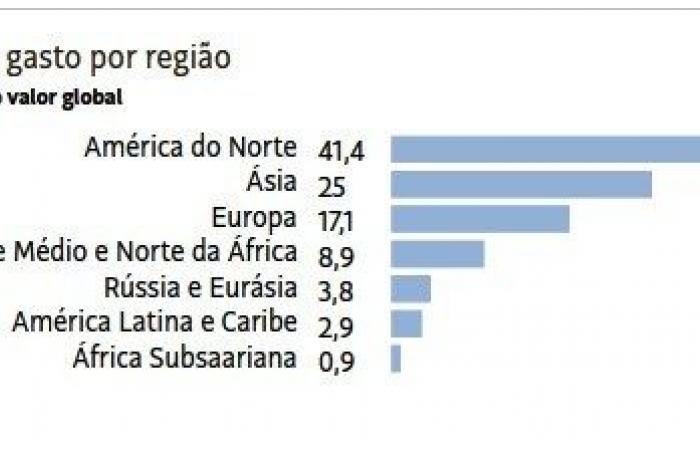 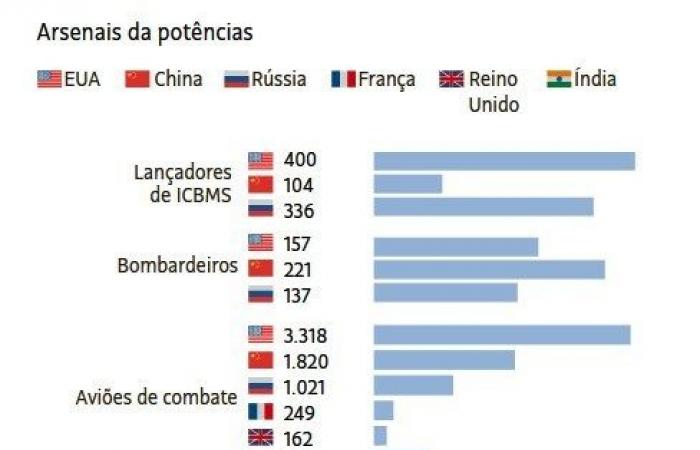 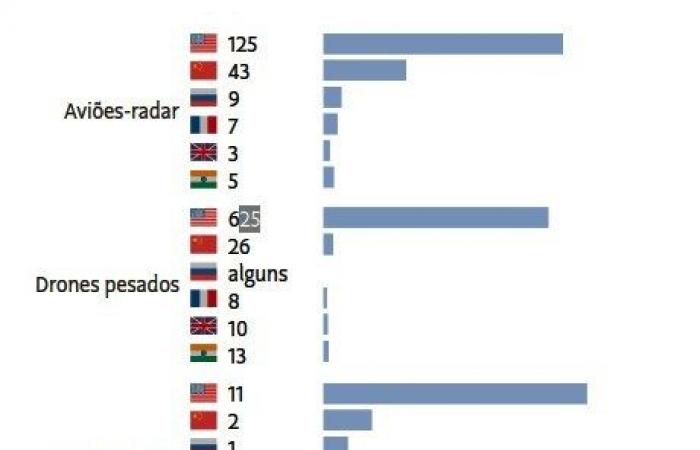 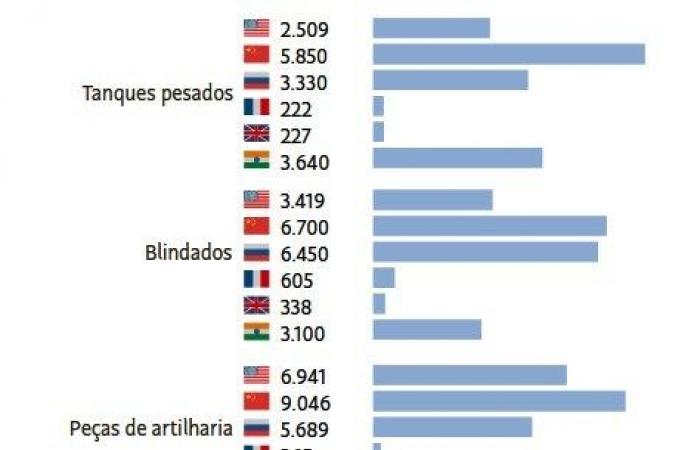 Despite the pandemic of the new coronavirus, which caused a retraction of the global Gross Domestic Product of 4.4% in 2020, military expenditures in the world continued to increase last year.

According to data released by the International Institute for Strategic Studies (IISS), in London, each day of 2020 the planet spent almost the equivalent of the annual budget of Bolsa Família.?

To put it in a pandemic comparison, in ten days the world spent the equivalent of emergency aid from the federal government. In figures, US $ 1.83 trillion (R $ 9.9 trillion) was spent over the past year in the defense sector, or R $ 27 billion a day in the price of this farm.

In 2020, points out the publication of the IISS “Military Balance”, the bible of the subject in the world, the rivalry between Washington and Beijing pulled the expenditure on armaments on the planet. Under Democrat Joe Biden, there is no indication that there will be a change in this route so far.

The pandemic, IISS director John Chipman said in a virtual press conference, may have the ability to “teach lessons on cooperation” to the armed forces, but the competition has continued to be fierce. 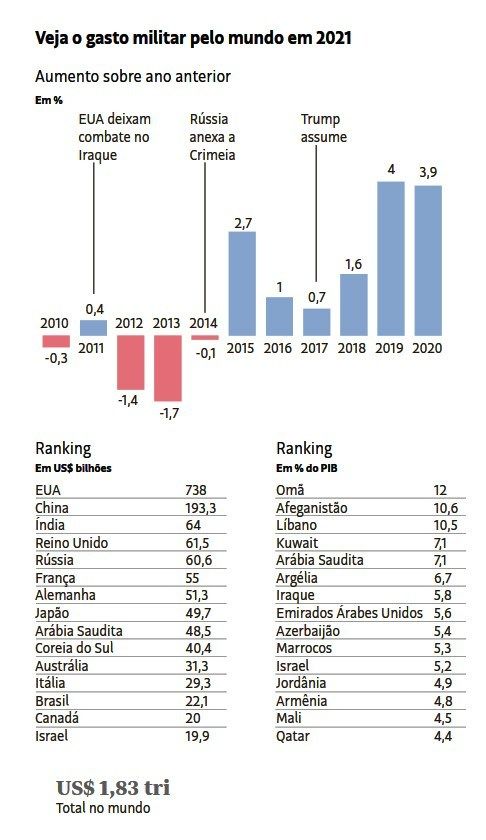 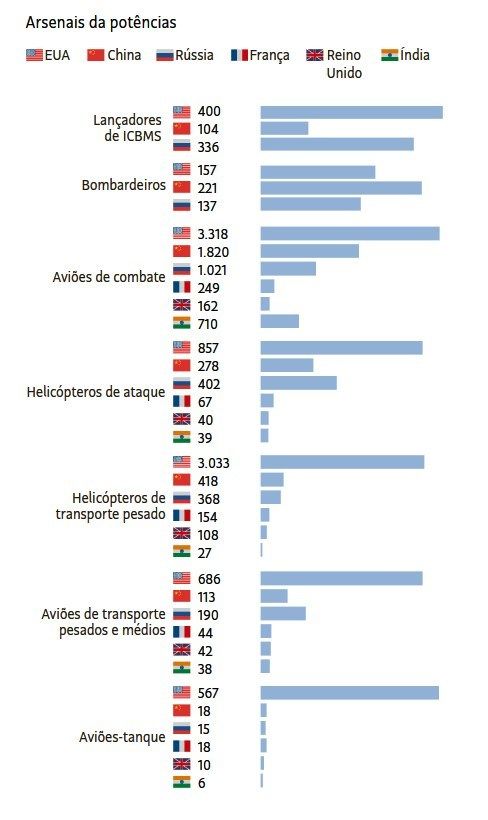 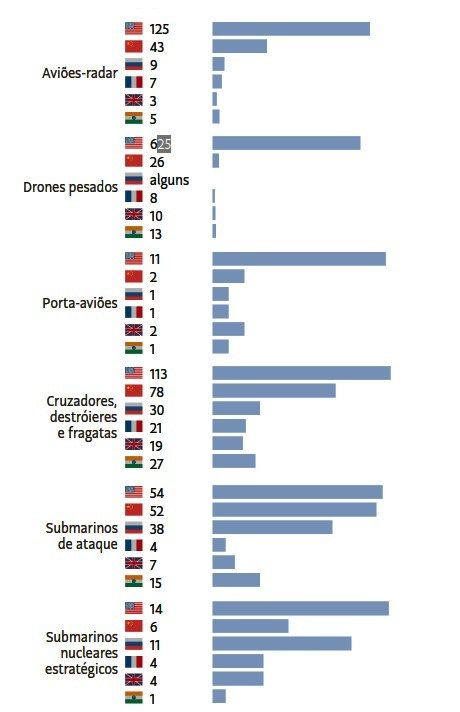 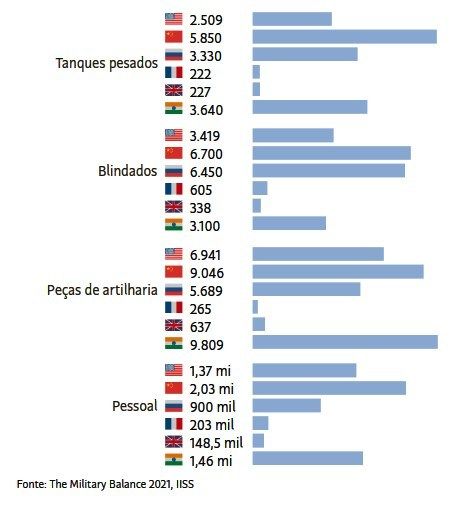 The USA is the dominant military power in the post-Cold War world. Its budget of US $ 738 billion (R $ 4 trillion today) in the sector accounts for 40.3% of the total spending on the planet and is equivalent to that of the next 14 countries in the IISS ranking.

This reflects the shift under Trump from the U.S. to the so-called competition between great nations, a concept that targets China, a strategic rival and rising power, the still militarily powerful Russia and, in short, stones in the shoe like Iran and North Korea.

IISS figures refer to countries’ actual spending. The Americans raised defense participation in their GDP (Gross Domestic Product) from 3.19% in 2019 to 3.55% last year.

Beijing has the second largest military budget on the planet, at US $ 193.3 billion (R $ 1.04 trillion). Huge, but almost four times smaller than Washington’s, putting into perspective the gap that separates the two countries, which spent 2020 provoking themselves in places like the South China Sea.

The IISS lists arsenals in detail around the world, and paid special attention to the growth of the Chinese Navy, the subject of alarmist statements by the Pentagon.

“In displaced tonnage, the United States is twice the size of China. But there have been major advances, in a few years Beijing has gone from nothing to 55 patrolling corvettes of territorial waters,” said naval analyst Nick Childs at the launch event of “Balance Military 2021 “.

Valdimir Putin’s ever-scrutinized Russia saw a resumption of spending during the pandemic as well, with spending up 3.8% – with a focus on modernizing its three forces and developing new nuclear weapons.

Regarding GDP, Russia spends 4.14% of it on defense, but its economy is infinitely smaller than that of the United States or China, the largest in the world.

NATO countries, the Western military alliance, followed the trend of increased spending brought about by Trump’s threats of disengagement over his tenure. In 2020, 7 of its 29 members reached more than 2% of GDP with defense, the club’s 2024 goal.

In 2014, when Russia terrified Western leaders by taking Ukraine’s Crimea for itself, in response to the fall of the pro-Moscow government in Kiev, the average was 1.25% of GDP in the bloc. It is now 1.64%.

Azerbaijan, which defeated Armenia in a dispute to retake areas occupied in the 1990s by its neighbor in the only one of the 33 conflicts listed by the IISS that had a dramatic evolution in 2020, saw its spending grow by 3.8% to 5.4% of GDP – losers maintained their high proportional spending of 4.8%.

As always, countries in conflicting regions easily lead the ranking when the ruler is the war ratio to GDP. The Sultanate of Oman, in the Middle East, is ahead with 12%, followed by Afghanistan, with 10.6%, and Lebanon, with 10.5%.

Brazil also had a slight drop in the table, although nominally in reais it had an increase in its spending. It went from 11th to 13th place, spending US $ 22.1 billion (R $ 119 billion) on defense, something above 1.5% of its GDP.

Here, the devaluation of the dollar weighed heavily on the bill, although the position itself is illusory: despite occasional advances, as in the case of the Gripen fighter and KC-390 freighter programs, 80% of Brazilian military spending is on personnel, including retirements and pensions.

Still, in the IISS assessment, “Brazil is the most capable power in its region”, followed by Colombia. Brazilian military spending accounts for 42% of total Latin America and the Caribbean, despite known distortions.

While Brazilian defense spending per inhabitant was R $ 561 in 2020, in the IISS accounts, Colombians employed R $ 990. It should be noted that the neighboring country still has the focus of a civil war that lasted almost six decades.

These were the details of the news DefesaNet – Think Tank – Defense for this day. We hope that we have succeeded by giving you the full details and information. To follow all our news, you can subscribe to the alerts system or to one of our different systems to provide you with all that is new.